The artist pulls from his memories of Mexico to articulate a uniquely American upbringing. 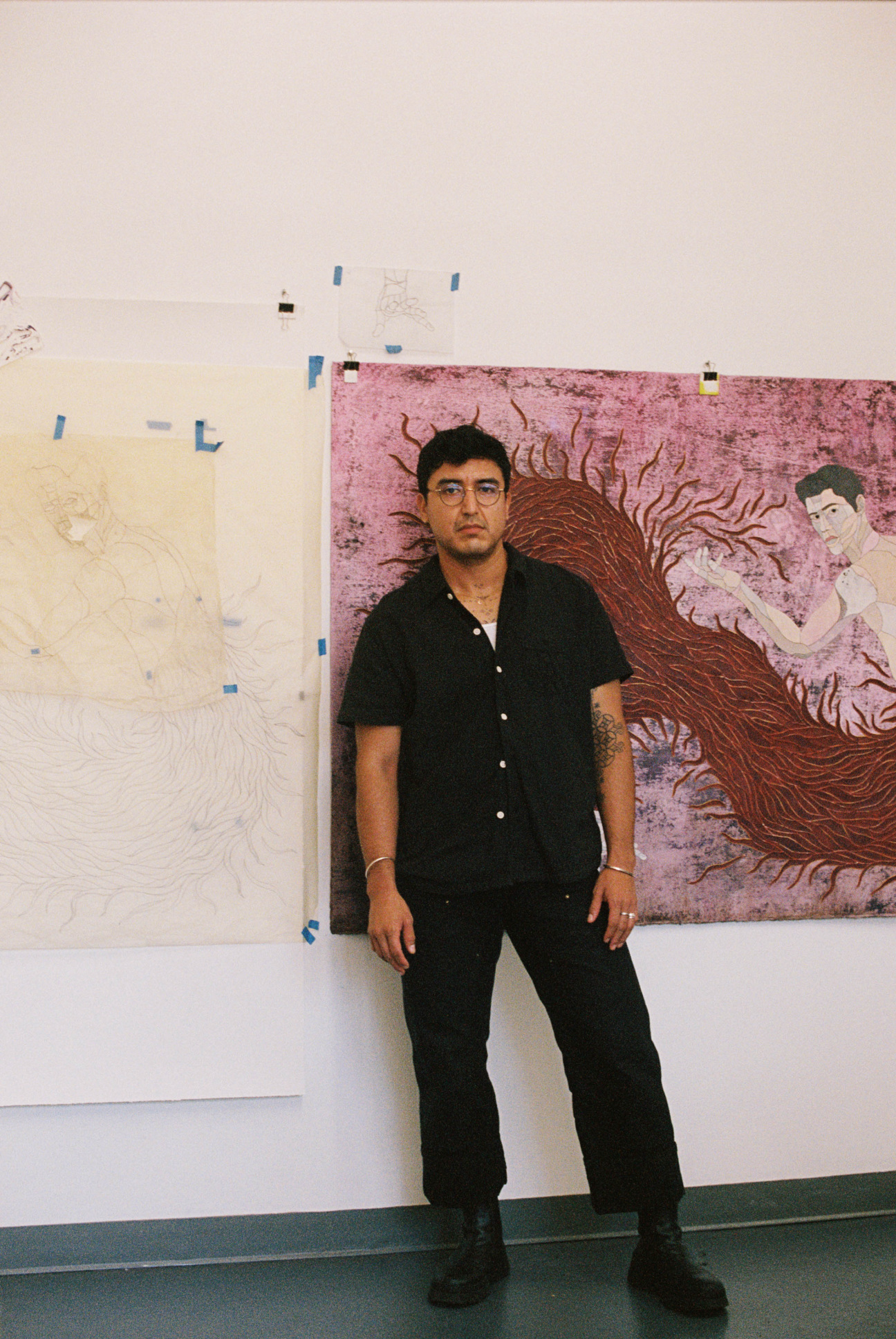 There’s a tenderness to Felipe Baeza’s work that belies the intensity of the collisions below the surface. Using printmaking techniques—but unconstrained by the need for a press—his practice marries elements of sculpture, collage, embroidery, and painting with imagery ranging from religious to erotic. “I construct from remnants,” he says from his studio at the Getty Research Institute in LA, where he’s in residence through June 2023. Baeza lived in Mexico until he was seven, when he reunited with his parents in the Latin neighborhood of Pilsen, in Chicago. “I didn’t experience Mexico until I left Mexico, in many ways,” he says. “When people leave home they try to recreate what they remember so it becomes this hybrid form of what you think home is.” In other words, our memories are also remnants.

“Have you been to a Catholic church in Mexico?” Baeza, 35, asks, recalling the surreal aesthetics and his childhood fascination with the imagery and fabulations. “Many of the churches are built from the rubble of old buildings that were demolished to create something else.” The layers of the artist’s work are material, but they are also conceptual and historical. There’s an inherent commentary on colonialism, but perhaps above all, they are investigations into the human psyche and the relationship between images and memory. Baeza’s works are in clear discourse with the images in C.G. Jung’s The Red Book and concepts of the collective unconscious. He accesses that sense of the unconscious, physically binding images and memories that are segregated in consciousness to perhaps remind us of all the ways we are shaped without realizing it.

Coming off his recent participation in “The Milk of Dreams” at the 59th Venice Biennale, Baeza—who is represented by Maureen Paley in London and has recently shown at the Fortnight Institute in New York and The Mistake Room in LA—is taking some time to make without the pressure of showing. After his residency at the Getty the artist will spend time at Anderson Ranch Arts Center in Snowmass Village, Colorado, and then will move to the Rauschenberg Residency on Captiva Island in Florida. Then, hopefully, we’ll get to see the fruits of this time of cultivation.