The artist is crafting a mystical narrative, one filled with spirits and plagues, that he plans to work on for the rest of his life. 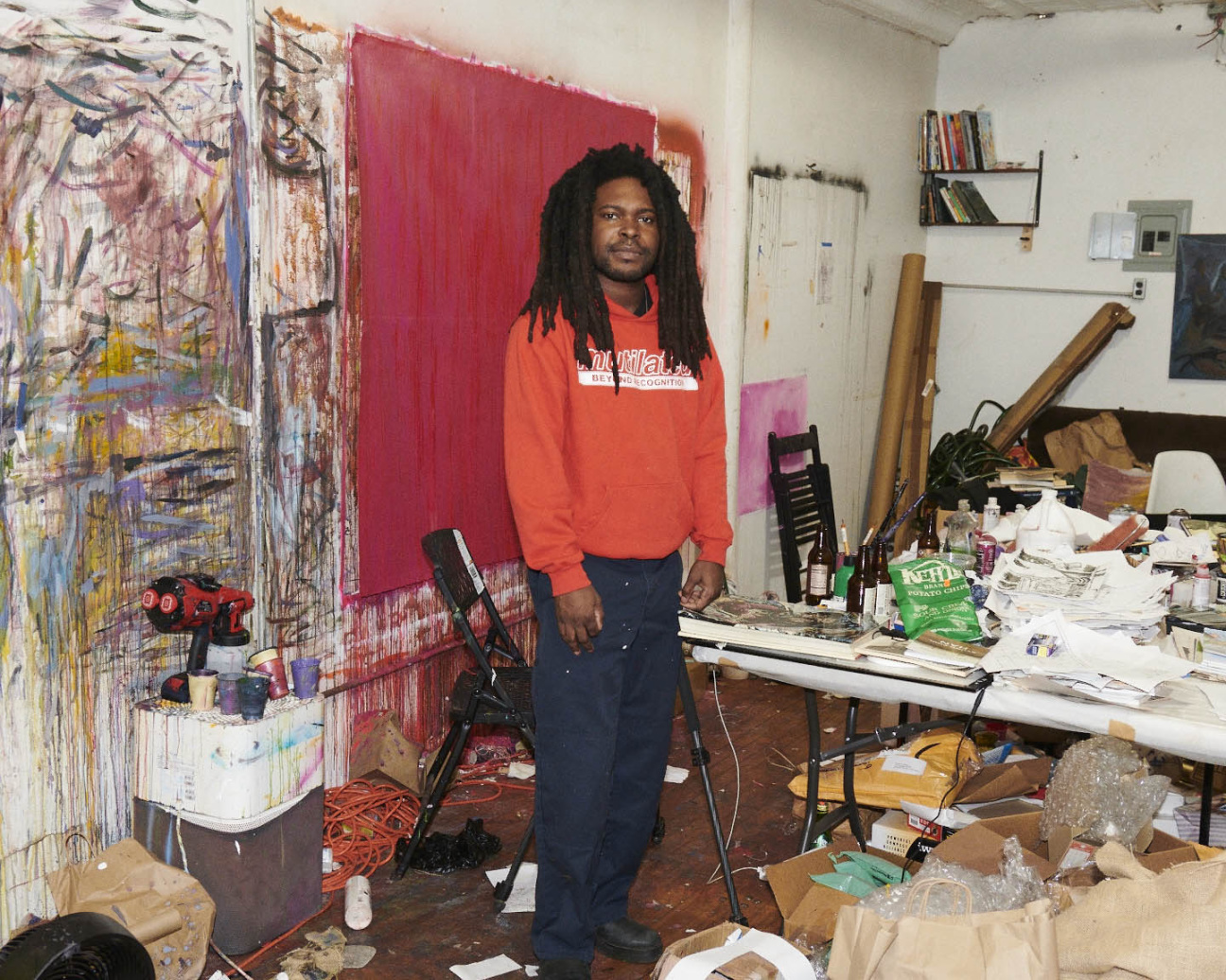 The Angel Moroni in charcoal flames rises above hooded klansmen, who fade in and out of their own negative images. An acephalic man, face carved into his chest, rests a foot on his own decapitated head in the crimson flames by the juniper tree. Perplexed hundred-year-old wanderers lose themselves in an acid-green swamp. Sedrick Chisom, 34, paints some really crazy scenes. They are crazy both formally and in terms of content—nobody else in this world is making images like these.

The artist grew up in North and West Philadelphia, lives in Bushwick, Brooklyn, and is represented by Pilar Corrias in London and Matthew Brown in Los Angeles. He began turning the titles of his paintings into short stories, and then into a dark-magical-realist three-act play, 2200, while studying for his MFA at Rutgers University. Now everything he makes comes together to form a grand dream narrative that he thinks he’ll probably be working on for his whole life. “It’s a world that I put all of my interests in,” he says. “Anything I’d want to draw or paint or write basically exists in this world.” In an age of cinematic universes, Chisom is one of the only artists out there building his own complete artistic universe.

“Decades after people of color elected to leave the earth, the last two nation states in North America have technologically and culturally declined to the state of America during the Antebellum South,” he describes the developing proposal. “This world remystifies, and supernatural events begin to occur. A mysterious incurable disease plagues every white person, causing the color of their skin to change or darken. Simultaneously, another group of mutated people—the “monstrous race”—emerges. The two nations band together to harass and war with the monstrous races. Despite this conflict, climate change and nuclear winter will ultimately determine the fate of the people in this territory…”

This is the world left behind once Black people have left: A world ruined by whiteness and capitalism. A grim tale, a hideous and ugly tale, you might think—except it’s stunningly beautiful. The intensely layered and seductive artworks depict a land haunted by spirits and mythological beings, by angels of darkness; a space of bright vivid hallucinations conjured by scraping, spraying, smearing paint across paper backed with raw canvas. Here are paintings that drip and burn, that glow with alluring toxicity. A polarized country rendered in polarized colors; a nightmare that feels like a dream. It’s the end of history and it’s beautiful. “The viewer gets drawn in by aesthetics related to enchantment, I think,” he says. “Often in enchantment you expect escapism, but I like the idea of reencountering all those things the viewer expects to leave behind when they enter such a world.”

As for his play, Chisom says he hopes to make it a reality one day: “I have tunnel vision with everything I work on, so it would mean taking a break from painting for a bit, but hopefully I’ll do it in the next few years.”