The artist's current survey at the Museum Dhondt-Dhaenens turns the genre inside out and proves why the Dutch sculptor is one to watch.

When asked if creating still lifes is a nationalist obligation, Dutch artist Magali Reus doesn’t answer immediately. She pauses. “No, definitely no obligation,” the sculptor says finally. “But it's something that I actually like.” The artist then goes on to prove it by doubling down on her pro-still life stance despite her initial hesitation to claim it, noting first how the art form has been historically underrated, perhaps not unrelated to the fact that they were at one point considered the sole appropriate subject for female painters, and then digging into her own affections. “I like that [still lifes] are of themselves and how these bits of communication about someone's wealth, about someone's travels, come through,” Reus says. “But I wouldn’t say I’m always thinking about them when I work.”

On a studio visit with Reus, you quickly learn the process the artist enjoys exploring most is the pedantry of the devil’s advocate. Every question and material is multi-sided and treated as such. When dealing with an inquiry, Reus goes through the trouble of exhausting it. She jumps trustingly into all the rabbit holes her subject generates in order to better get to know it. During these frequent journeys to the fringes of an idea or concept, the artist has learned the value of incomprehension and those things in life that teeter on the edge of legibility.

An observable example arrives in Reus’s current survey at the Museum Dhondt-Dhaenens (MDD) in Belgium titled “On Like Scenery,” which picks up the plotlines of her back-to-back solo shows with François Ghebaly Gallery in Los Angeles and The Approach in London including the sculptor's first body of photographs. Reus's images are reminiscent of Roe Ethridge’s digital collages, where shot and fabricated digital elements are fused together to form a final composition. Also like Ethridge, produce is a recurring preoccupation that has been trickling through Reus’s output for years, and now at MDD, gourds and eggplants appear as leads and support actors in her inaugural photographic series. Her fixation on fruits tracks back to her bird’s eye view of them. For Reus, vegetables are not only powerful muses connected to historical Dutch still life paintings, but also shorthand symbols for globalization, biohacking, Instagram influencer foodie culture, health, slavery, hybrids, and portraiture, not to mention the accidental letters she reveals when peeling and cutting up her lunch. 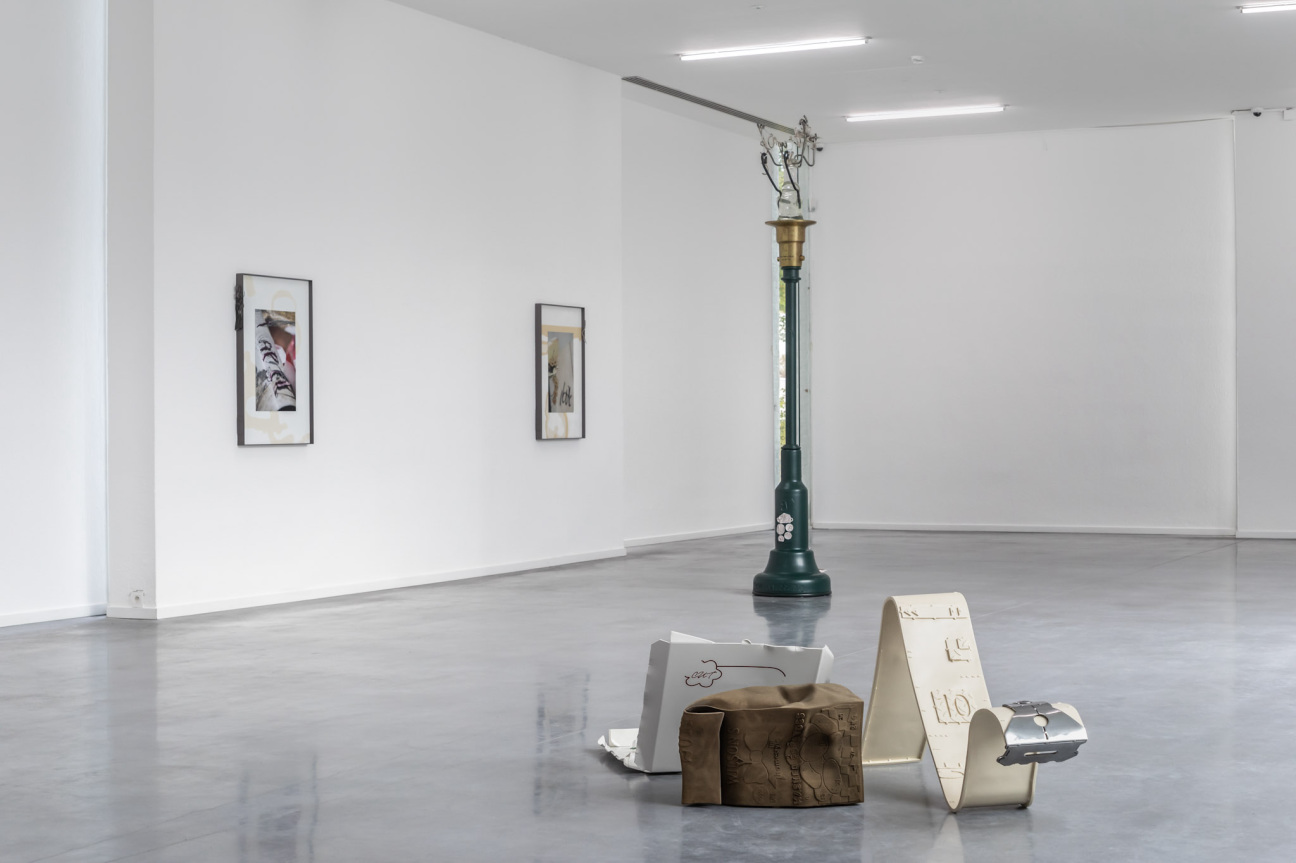 This last bit is what inspired the whole series in the first place. Reus liked the way her purple cabbage leaves would leave her little messages–some only barely readable like rushed graffiti or hand scribbles. She started to use cabbage to spell out lopsided messages and soon developed a whole alphabet she wants to see published and used as a font. At MDD, the cabbage letters spell out the months of the year as part of a subtle calendar that slowly unfolds across the galleries–detail by detail, cherry stem by orange peel.

Reus’s monastic commitment to ​​casuistry echos through from her current Met Museum show, "Cubism and the Trompe L'oeil Tradition,” an exceptional exhibition which connects the dots between the symbol-laden “messy tables” of Dutch hyperrealists in the 1880s and the Cubists that proceeded to find an order for them in deconstruction. Reus is the offspring–an artist trying to create images that defy a singular reading–by putting technology’s most reliable and elemental tools, from iPhone cameras to rulers, to work for the illogical ends of human imprecision and whimsy.

At MDD, the calendar photos are not left to fend off our biases alone. They appear next to several intersecting sculpture groups. The first is a gaggle of life-sized lamp posts with vegetables, perfect cast replicas, standing at their feet like gargoyles. Here, under the glow of Reus’s deranged lamp, is where the city kid meets the agrarian for their first kiss on the town limits. The lampposts also have the delightful side benefit of politely poking at the affluent suburban community in which the museum is situated. The lamppost is a symbol that evokes cinema and romance but also private security.

The same tensions emerge in the second sculpture series which references both the permanent  (processed and powdered food) and the purposefully ephemeral (cardboard boxes for transporting cut flowers) through a series of floor-bound replicas flawlessly reproduced from laser-cut, folded, forged and coated metal. The industrial precision of these sculptures adds a confusing credibility to Reus’s intuitional content. We know that the generic fish flakes bag and a discarded florist box for rose stems must be freighted with importance if only because someone has gone to all that trouble to remake them in such exquisite detail. Or are they significant? Is this a trick? The question of intention flips over at the slightest touch in Reus’s work and we are left to wonder if our bias and opinions are as shelf stable as they seem.

Like the cubists and the hyperrealist still life painters that came before her, Reus dares us to acknowledge the game and keep it going. She reminds us through her own example that every canvas, every choice, every minute, offers the chance for a new gambit powerful enough to change the whole composition.