Is Art Basel Ready for Austyn Weiner? She Certainly Is

The explosive Frogtown, LA painter has two big announcements ahead of Art Basel Miami Beach: gallery representation with Massimo De Carlo and a solo presentation at the influential art week. 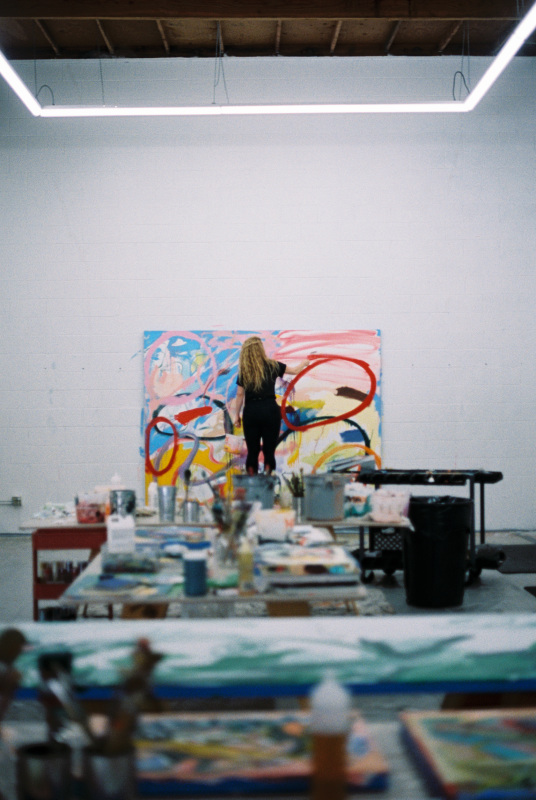 Austyn Weiner refers to her studio as an adult playground. “There’s an inversion table, there are fun chairs and things to sit on, there’s an adult swing—not that kind,” she muses to Cultured. “I shouldn't say adult swing. It's a regular swing. But who knows, life is long. It could totally end up a sex swing.”

It’s been nearly a decade since the 33-year-old artist's first solo show, and in the intervening years, her explosive, large-format works have been shown at the likes of Berlin’s Konig Galerie and London’s Carl Koystál, and incorporated into the permanent collections of Shanghai’s Aurora Art Museum, Guangdong’s He Art Museum, and the Green Family Art Foundation in Dallas. Today, Weiner announces a new milestone: representation by Massimo De Carlo. “It feels incredible,” she says about joining the international gallery known for its roster of impressive names such as Olivier Mosset, Felix Gonzalez-Torres, Maurizio Cattelan, John Armleder, and Carsten Höller. “I've been resistant to formal representation for a long time, because I needed to get to a point where I felt confident in who I was and what I wanted to add to the conversation,” she adds. “When it comes down to it, I'm following my gut and whatever gets my blood pumping—right now Massimo De Carlo is doing that.”

Weiner’s work reflects the same balance of youthful ebullience and meticulous restraint as the artist herself. Originally a photographer, her paintings are layered, chaotic, and bristling with color—but the mayhem stays on the canvas. “There's so much chaos in my work, and I think that I need to keep it there,” she asserts. “For a lot of artists, creating work is a beautiful, meditative practice. For me, it's a bit more bombastic, so keeping everything else balanced is important.”

Nevertheless, the painter's studio is scattered with legal pads covered in lyrics and poems, and every flat surface is laden with dented tubes of paint. A large table, covered in a sheet of plastic, serves as a giant palette (a trick she stole from De Kooning) for mixing the misty blues, dense greens, and chalky yellows that thread their way through her paintings. In fact, the space—located in Frogtown, a raw fringe of east Los Angeles that hems the LA River—has played a major role in informing her process. The cavernous, light-filled studio is the biggest that she has ever occupied and demanded a more fluid approach to her practice. “There's an overwhelming enormity to it,” she describes. “I scale my practice up or down depending on how much room I have, and right now I'm working on 25 paintings at a time. It’s wild.” In the morning, Weiner might put on a George Clinton album and concoct some “deep reds, marigolds, maybe a chromium oxide green” for one painting, before turning to Leonard Cohen (who calls for “raw umbers, titanium blues, anything earthy”) and a more somber canvas in the evening. “But recently, the colors I’m using on one piece have started to leak over to their neighbors. The ideas, too. One painting I'm working on is hyper energetic, and it’s begun to seep into these other works,” she says. “It's kind of like raising children—their personalities are all different, but I’m raising them all together.”

Weiner has spent the better part of 2022 preparing a selection of works for her solo Kabinett presentation at this year’s Art Basel Miami Beach with the gallery. The exhibition will mark her first show in Miami—Weiner’s hometown—since 2018. She’s thrilled, she’s quick to note, but the pressure weighs heavy at times. “It’s such an exciting moment, but I'm totally overwhelmed. And then when I zoom out, I'm incredibly grateful. But being grateful doesn't necessarily make the day-to-day any less overwhelming.” Weiner says she’s learning to surf the ups and downs of her own mind, and to make work that celebrates that process. But for a young artist with a self-described anarchist bent, securing representation and entry into the blue chip art world presents its own set of challenges. “You're conditioned to think that the only way to enter this sphere is by delivering crowd pleasers in 25 different colors,” Weiner admits. “As I enter this chapter, I'm constantly watching out for that pressure of sameness. That's just not why I'm here, and not why I'm painting. There's something to be said for forcing yourself into a really focused place in your practice, but it's incredibly brave to resist that desire.”

Considering the artist's distinct oeuvre, there’s little risk of that conformity happening. “I have this really deep, very honest relationship with myself. Most of the things I am eager to see happen in my career are between me and the paint,” Weiner asserts. “I genuinely believe the rest follows.”