Musician and playwright Leah Hennessey first landed in our pages for her Youtube show "Zhe Zhe" with her co-conspirators Ruby McCollister and Emily Allan. Today she is top of brain thanks to a recent collaboration with Celine and Hedi Slimane for their latest runway show which she scored. Here, she gives her own visuals to the track. Beware there are teasers for her upcoming television show with Allan: Illuminati Detectives and strong New Romantic overtones.

How do we know your Celine collaboration isn’t an act of the illuminati?

Leah Hennessey: There was some talk of a mysterious tastemaker and then it was like I got Men in Black flashed and I immediately forgot the name of this person whose name was dropped who had maybe pointed me out. Then next time I asked about it, someone was like, "Oh, we heard your song on a playlist. "

I don't know how they found me, or what happened. They wrote to me out of the blue and asked if I wanted to do a song for their runway show, and I sent them Byron is Dead, which is one of my many, many songs and projects I have about the 19th century romantic poet Lord Byron. Hedi Slimane ended up co-producing it, which I think turned out really well.

What about Lord Byron is innately fashion?

LH: Lord Byron is the first modern sex symbol. Insofar as fashion is about sex, he is perpetually fashion. This song is really Byron speaking through me to the people of today, asking to be remembered and objectified and sexualized. I don't know how much Hedi and Celine team thought about the Byronicness of it all, but I did see lots of capes and high boots in the show so there's definitely a link.

I feel like I'm like that meme, connecting the threads of the conspiracy board, trying to pull this all into one project. The music video is scenes from our upcoming TV show, Byron Shelley: Illuminati Detectives in which I play Lord Byron.

I love those ’80s and ’90s music videos where they have the scenes from the film intercut with a performance by the artist in character, like Men in Black (why am I thinking about Men in Black all the time?), or the “Wild Wild West“ video when Will Smith is James West doing the song. I guess I’m really just thinking about Will Smith videos, interesting.

I made this with my friend Paul Gondry and we were just really into New Romanticism, bringing New Romantic back, again.

What was on the moldboard for this video?

LH: Well, we wanted the music video to be New Romantic, very early ’80s and English, but a lot of that stuff was always a reference for Illuminati Detectives, which on the surface is more straightforward 1816 period piece, but also has a lot of Derek Jarman, Ken Russell camp to it. It’s not like we were trying to do micro-budget Merchant Ivory. But the video is simple: it’s supposed to just be the teenage feeling of a transcendent moment walking through the park listening to music. Escape. The title is very teenage too. When Lord Byron died, all these young people throughout Europe freaked out because he was their hero. Girls all over supposedly carved the phrase “Byron is Dead” into rocks, like graffiti. I always thought it was all girls but actually the famous one was the poet Alfred Lord Tennyson, who carved “Byron is Dead” into sandstone when he was 14.

So, this is a teaser for your show?

LH: Well, exactly because the TV show Illuminati Detectives is a Sci-Fi period piece with a punk rock ethos. It makes sense that people's first exposure to it is a music video.

Adding yet another hyphen to your plots.

LH: The rat king of hyphens. Always trying to do everything at once. The music, the TV, the fashion… where are the lines?

I know I too have boundary issues. It’s something I’m working on.

LH: Oh my God. Especially with projects. I’m realizing more and more how strange it is that I don't really have friends who I don't work with. I involve everyone in everything. When you involve all the people in every project, then the projects are bound to get bound up in each other, and then you end up with a music video that's promoting a TV show that's promoting a fashion campaign.

Do you feel like you are able to go crazy as a musician because you have this other live as a visual artist?

LH: Well, I got in an argument with someone the other day because I said very flippantly that I like music videos more than I like music. My friend said that that is not true, and that I was just being sensational. I very “debate team style” stuck to my guns and tried to argue my way through it because a lot of my deepest experiences of music are connected to the images, whether that's the music videos or the album covers or pictures. Whenever I'm making music, very early on in the process I start thinking about the visuals and the music video, and that keeps me engaged and excited. I'm not enough of a musician to have a world that's pure music. The visual stuff's never an afterthought or a way to market the music, it’s part of the making.

Are you touring right now?

LH: I'm going to do a little mini, mini UK tour this summer, but it's going to be all stripped down acoustic versions of my songs and just me with the guitar, which is the exact opposite of everything I've been saying, combing all the mediums and everything.

Do you use small projects to delay big ones?

Leah: Yes, I think that that's been true in the past. But now I want to make Illuminati Detectives a real TV show, whatever that means. That's a big, long-term project that I'm making sure not to rush, because I have a tendency to get excited about something, go monomania about it, bring it to a crisis, and then move on.

Emily and I have been convinced that we are the reincarnation of Lord Byron and Percy Bysshe Shelley for almost four years now, and that's a slower burning passion. I do believe that this show could be the culmination of all that and could make all the other stuff we've made make sense. The music video was just a gesture of dipping a toe into this ocean and keeping it moving a little bit.

Where did you film?

Leah: We filmed that in the park up where Paul Gondry lives, near the Cloisters; he knows all the caves up there in Inwood Hill Park. It has the oldest trees; I guess it’s the biggest old-growth forest left in Manhattan.

I didn’t know there were caves in there.

LH: I wouldn’t go in the deep ones.

I like imagining you after dark throwing yourselves around a park.

Leah: I always talk about this, but I've been young for so long that I increasingly feel like a child vampire. I'm just trying to remember the things that I thought were good ideas when I was 16 because they're still good ideas. Especially if I'm doing something like a music video.

LH: That's what the painters do.

Or they're forced to by their galleries. What about the Byron of it all?

Leah: Byron is like Napoleon. Lots of people get convinced that they are Byron. David Bowie had a character he did called Screaming Lord Byron; I guess that's when he thought he was Byron. So many major literary characters like Heath Cliff, or even Mr. Darcy are all written by girls who are just obsessed with Byron. He's always been available as a person anyone can be. We do believe we’re the reincarnation of Byron and Shelley, but it's also like anyone can be the reincarnation of Byron and Shelly.

Leah: It's an open-source archetype. 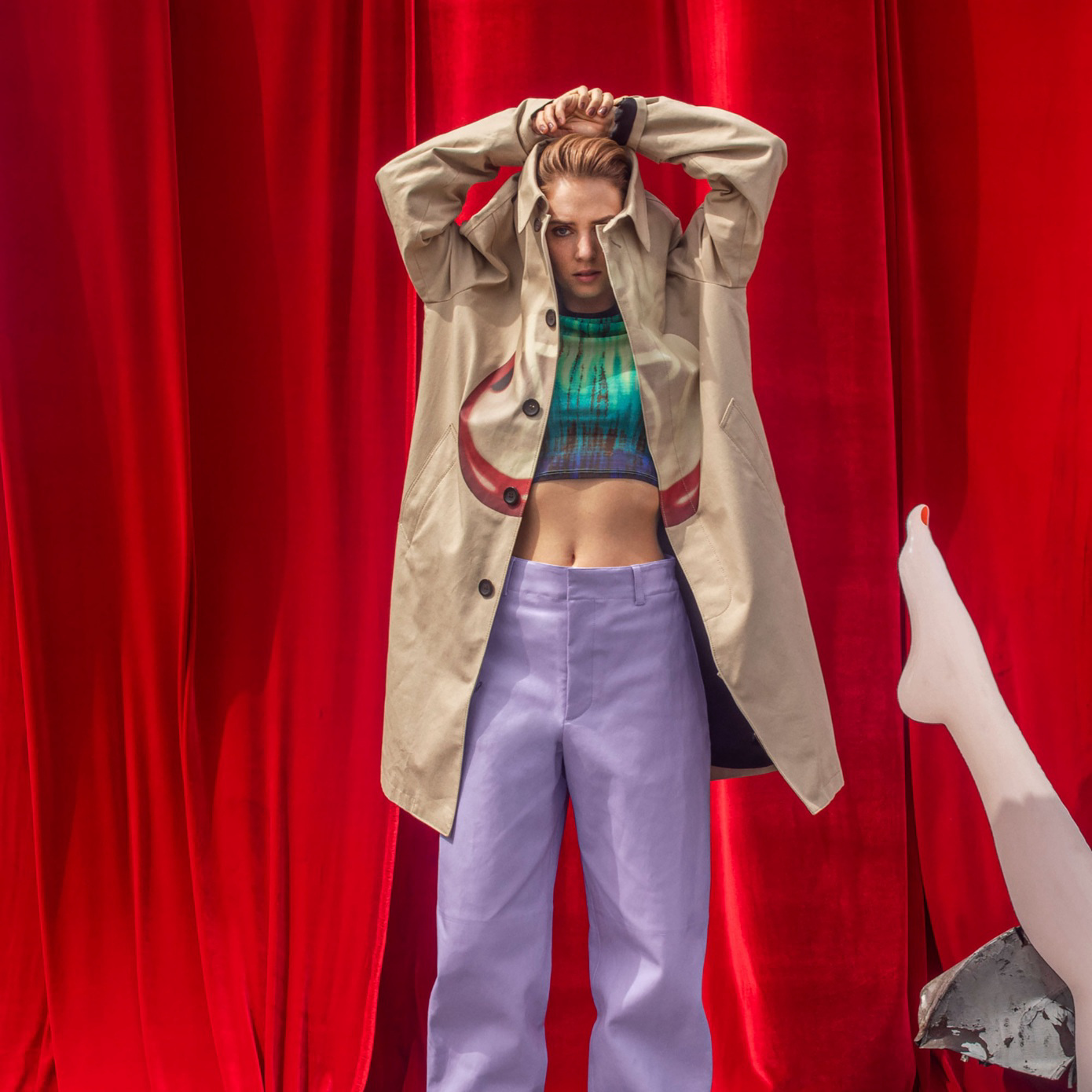