I met Hilary Pecis as most of us meet in the art world, via email. It was 2015 and she was working as a registrar at a Los Angeles gallery and over the next four years we would be in touch regularly to manage the less than sexy post-acquisition logistics of moving art around. I wouldn’t know this until later, but we met within a year of Hilary moving to LA and becoming a new mom. In those critical early years here in LA she would solidify the painting practice for which she is so well known now.

When I think of Hilary’s paintings from that time I think of small scale, tightly cropped snapshots of interiors—her own and her friends’—as well as familiar scenes of LA landscapes. The scale and subject matter seemed very pragmatic for a new mom, working a fulltime job and maintaining a painting practice. Reflecting on this I couldn’t help but think of the late great Luchita Hurtado who maintained her practice while raising her son by making works on paper and smaller scale paintings when space and time were limited. While Luchita was her own subject within and beyond domestic spaces, Hilary delivers her own brand of portraiture by zeroing in on the objects and places that make up the person. 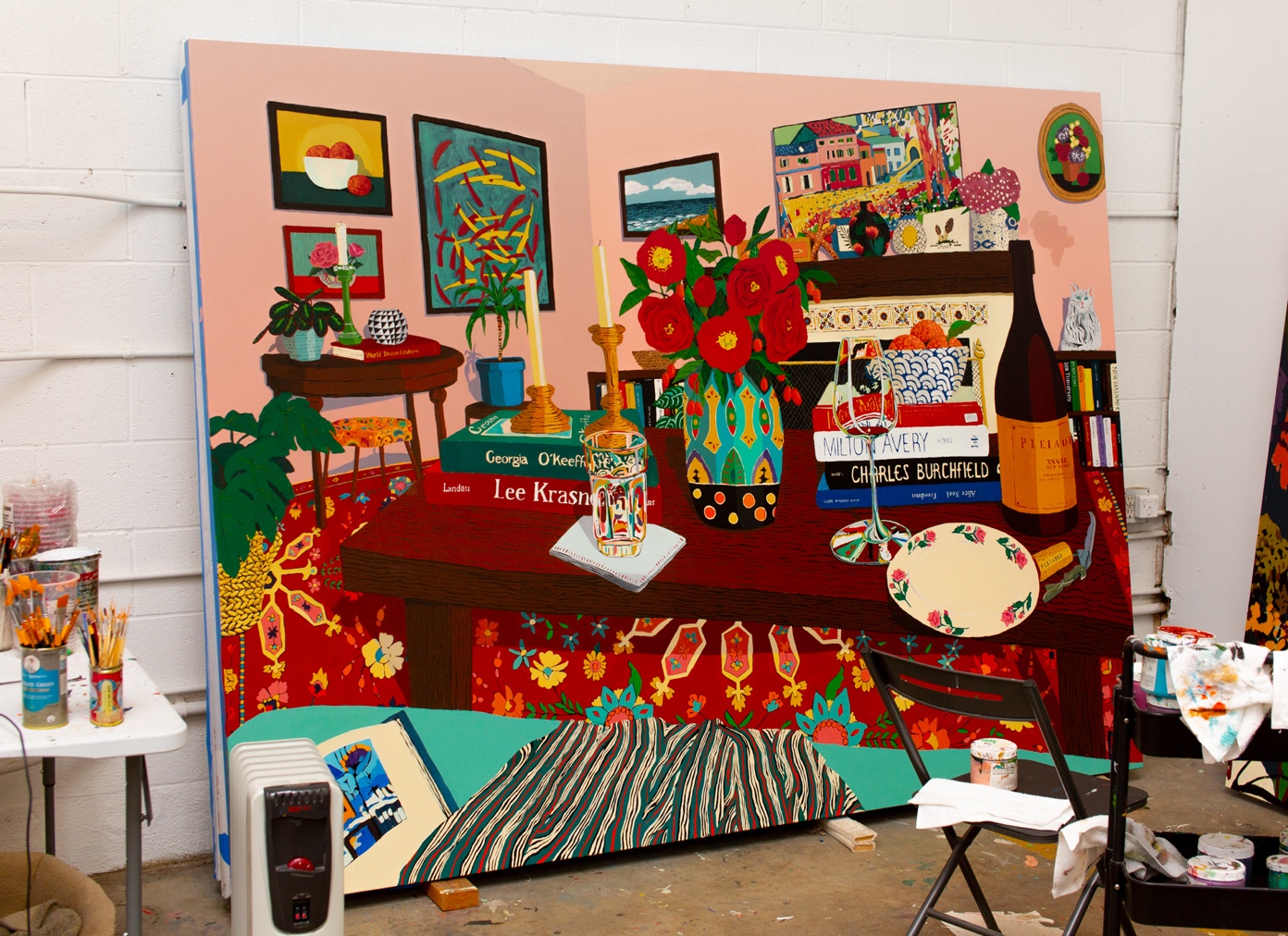 Hilary transitioned to making art fulltime in 2019. In the lead-up to leaving the gallery, we kept in touch in the other usual way, Instagram. Fast forward to April 2021 and despite the least predictable year in recent history, Hilary was in the throes of preparing for her most ambitious show to date at Timothy Taylor gallery in London—a perfect time for a studio visit.

Entering the studio, I was immediately struck by the shift in scale: the ceilings were high, the paintings were big and the studio was full. I was truly in Hilary’s world. Out of the corner of my eye I caught sight of an earlier painting, which fit neatly onto a small shelf, and I thought of just how far she’d come.

Generosity and earnestness imbues Hilary’s work. She invites the viewer into familiar spaces to consider the objects that she says either define who the owner is or who they aspire to be. Every inch of the canvas provides information to help the viewer along the way. For Hilary, the absence of the human figure allows the objects to interact as figures themselves. Familiar names and titles appear on books; pattern and color move the eye around rapidly and then slowly. With each new object, arrangement or landscape Hilary finds ways to challenge herself as a painter. From afar, or on Instagram, her paintings can read as flat. But upon closer inspection we see that each object and pattern carries its own topography, layered more or less with a conviction and a looseness that is amplified in the larger canvases. 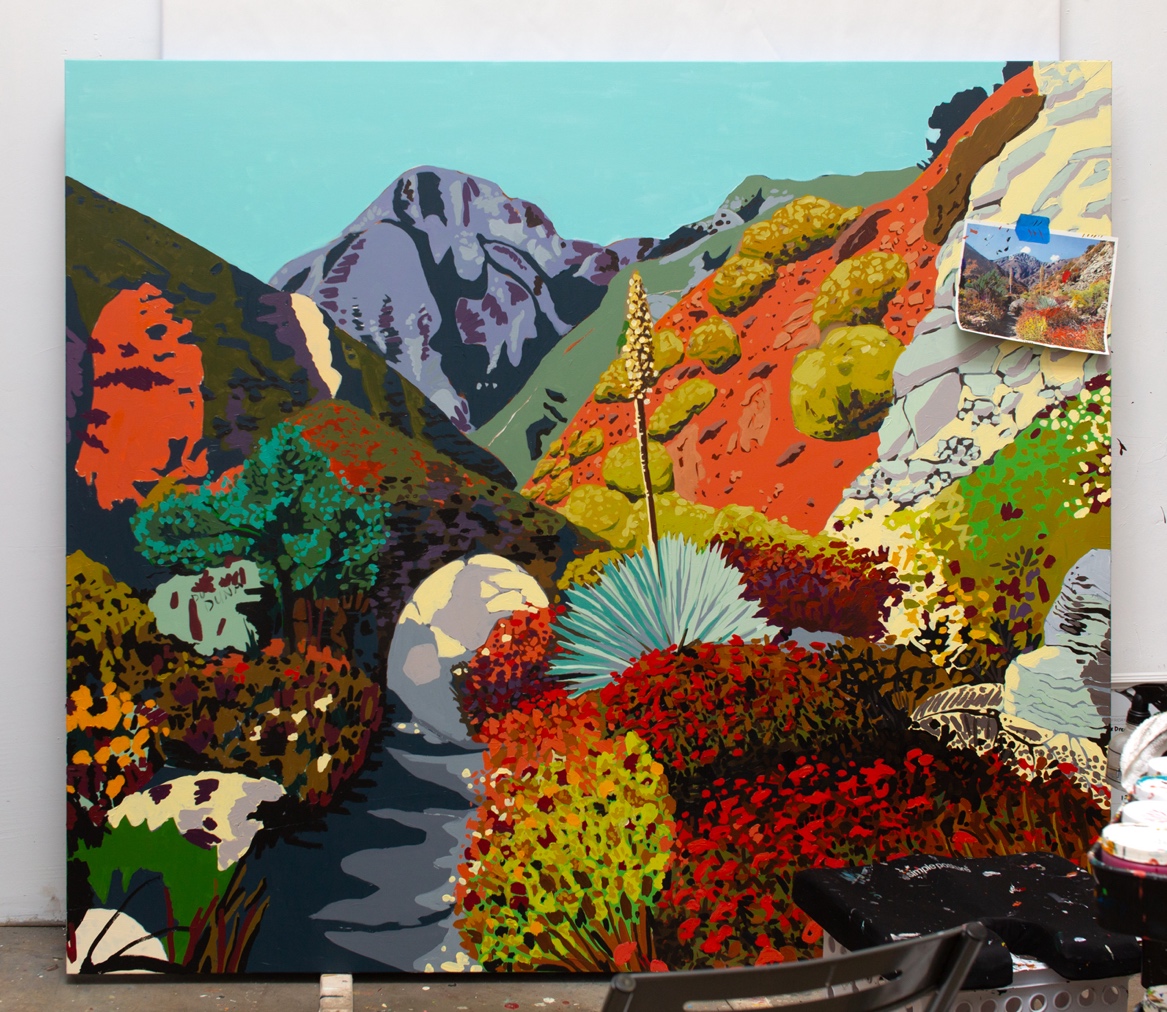 Hilary’s landscapes read as a love letter to LA. An avid runner, she attempts to capture its often fleeting, hard-to-photograph light and topography, putting liquor stores with hand-painted signage and sunlit hills on equal footing. The magic in each of these spaces is in the specialness they carry for Hilary as part of her daily routine. We get to join her on her run, from the safety of a gallery, without the risk of doing cardio ourselves. Her ritual is writ large and, on this occasion, will be transported to London where Hilary hopes visitors will “feel the warmth of the LA sun and the coziness of the spaces depicted.” You can feel the sunshine at Timothy Taylor gallery in London through June 26; at David Kordansky gallery in Los Angeles, Jack Shainman’s Kinderhook School in New York and a public project at 30 Rockefeller with Art Production Fund in July and later at a solo show with Halsey McKay in East Hampton.

Nancy Gamboa: When did you begin making work that bears resemblance to where your practice is now? What brought you towards making this work?

Hilary Pecis: When I was in graduate school, I was making a different body of work, but an advisor suggested that I keep a side practice, which was a version of the paintings I am making now. At the time I was mostly interested in using representation as a jumping off place in which to explore paint and to develop a vocabulary of marks. A few years later when my son was born, I had fully transitioned into making representational paintings depicting still life and landscape. There seemed to be infinite possibilities within representation, and even within the more specific and narrowed genres. I have yet to show up in the studio and feel any type of artistic blockage. 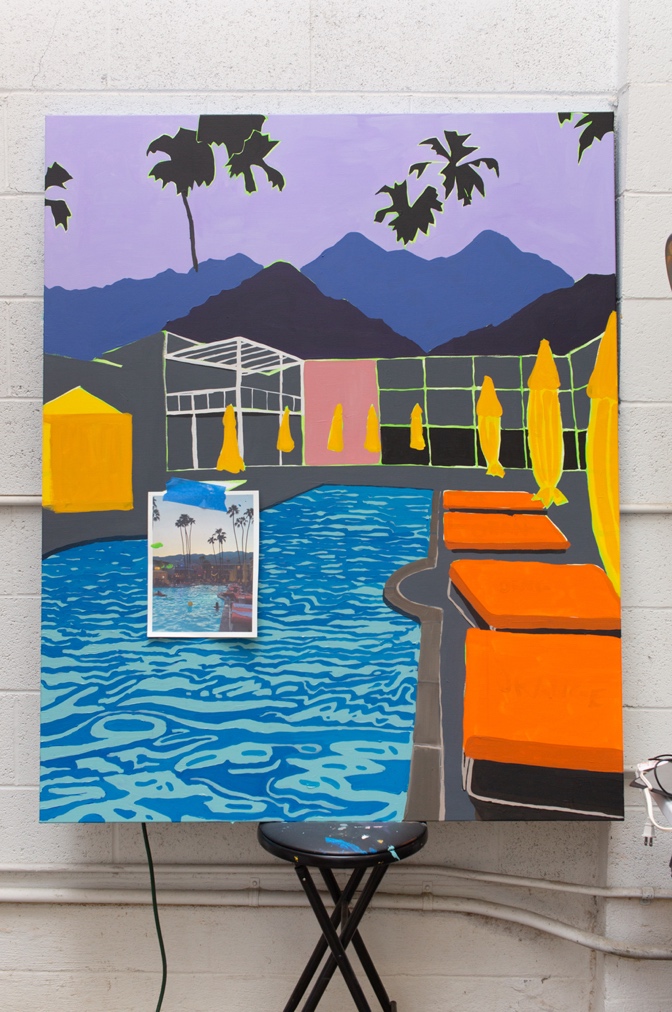 NG: You have a consistent interest in depicting scenes of domestic interiors, landscapes, flora and other singular objects, all of which read as a sort of portraiture. What compels you towards these arrangements and subjects?

HP: Yes, it is true that I love to depict the arrangements within my own home as well as other people’s spaces. There are two parts to this: firstly, especially in paintings of interiors there is a sort of portraiture that takes place in what people choose to put on display. I love the idea that those objects either define who they are or who they aspire to be. In addition to that, there is a pleasure in painting the way objects interact with each other as figures themselves. There are also the many opportunities of chance in the arrangements put together by my friends and family. I get to try my hand in rendering things that I have not painted before, to act as a tourist in painting other artworks and handicrafts.

The landscape paintings feel a bit more personal to me, as they are typically from the trails that I run or street scenes from road runs. As a runner I spend many hours running the same paths, looking at the same markers day after day. There are many signifiers of the LA landscape that I enjoy, which never seem to lose their magic: the palm trees lining streets and towering over the homes below, the liquor stores peppered with hand-painted signage. Additionally, we have such amazing sunlit hills that never quite photograph the way they are seen in real life. I try my hardest to represent our beautiful landscapes as I see them, and not as how they are reproduced in a photograph. They truly are breathtaking.

NG: How does your compositional style coalesce with your approach to mark making?

HP: In both the composition and the mark making, there is a looseness, an initial quickness. The composition is scrawled onto the canvas, and I move on from there without a precious approach. As I start to tighten up the space and work on the different components in the painting, I am careful to not fuss too much, as I don't think that is a necessary component in telling a story or communicating what I am trying to show. 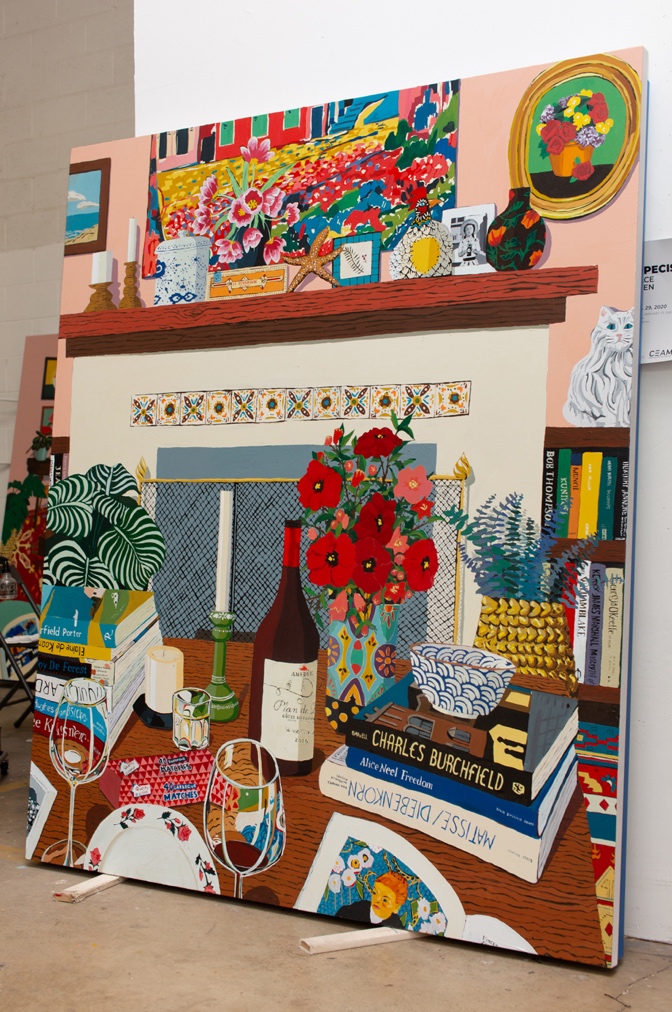 NG: There is a perspective concern in most of your works, which is really influenced by their scale. The paintings have increased in size in recent time: what prompted this? How do you feel this changes the way they are encountered by a viewer?

HP: In the last few years nearly all of my paintings have increased in size. This was partly because I took on a larger studio that allowed for bigger canvases, and also because I quit my day job and was able to dedicate all of my time to painting. Although there is something sweet about smaller paintings, viewing the picture plane as in intimate porthole, I much prefer the larger canvas. With more space there are opportunities to loosen up and become a bit more painterly, as well as the logistics of the larger support allowing for more information to be covered, more paint to be applied. I really love to be able to really step into a painting as a viewer and with the larger canvases it feels like I am able to enter the space in a way that wasn’t possible with the smaller works.

NG: You have an upcoming solo show at Timothy Taylor in London, opening this September. The work I’ve seen thus far features iconic LA imagery: the quality of light, palette, landscapes and scenes all dialogue very particularly with Southern California. How do you feel about this change of locale, and bringing the work into a new context?

HP: I am so thrilled to have my paintings in a show at Timothy Taylor in London! It will be my debut European solo show. I have lived in California all but a year of my life and feel like I have a very California sensibility in most aspects of my life, including my painting approach. I don't know how the work will be received but I hope the folks across the pond feel the warmth of the LA sun and the coziness of the spaces depicted.