After a year’s delay, the director and co-writer debuts her much anticipated film, Zola. Devan Díaz calls her up to discuss the nuances of the tragedy, comedy and chemistry that the film takes on with gusto.

Days prior to our interview, director Janicza Bravo fell asleep behind the wheel of her car. Shaken up by the accident, she took sometime off to recalibrate. “Today is the day,” she tells me over Zoom, “that I’ve decided to keep on living.” She laughs while saying this. Her office in Los Angeles, from what I can see, explodes with light. Behind her, a mirrored storage wall reveals what is afoot: foliage dappled with sunshine, rows of neatly labeled bins, Bravo folded into herself at a desk. She wears a boatneck striped shirt and lights a cigarette mid-sentence. Breathe in, breathe out. Looking at me, not her digital reflection, she asks: “How are you?”

I’m fine, living in the dregs of quarantine. I skip ahead to ask what she’s watching. “I’ve been leaving the TV on the Turner Classic Movies channel.” Is that available on streaming? “I don’t know, but I love the live element. Something about having the option to select will send me down a hole of not arriving at a selection. With cable I can check the schedule. I can be like, ‘Okay, so this is what’s on tonight. I’ll be back at 7:45.’” Isn’t it exciting to be surprised? “It’s like going to a museum while traveling. It doesn’t matter what’s on view while I’m there, I’m just going to experience something, because it’s what is available to me. There’s pleasure in that.” There’s also pleasure—and a little pain—in a true belly laugh, something Bravo’s films are known to induce.

She tells me a story: “I’m in LA so I went to a juice place the other day—I know, crazy. The woman at the counter was like ‘I saw your short films on Criterion. I only watched two of the four, because they really made me uncomfortable. I had to take a break.’” Bravo doesn’t blame her for this. “That’s such a funny thing, right? I make work about the discomfort I feel being in my body. Not to say that I am uncomfortable in my body—it’s how people treat me because of the skin I am in.So, the work is naturally imbued with my distress. I feel that laughter is the only way I’m able to exercise these feelings.”

I wonder if the juice-place clerk watched Gregory Go Boom (2013). The 18-minute-long short follows Michael Cera as disabled little brother Gregory, who blows himself up after a failed attempt at losing his virginity. Hilarity clashes with the grim realities of living in a world laid out for (often cruel) able-bodied people. He’s the sidekick in his own movie. The initial responses were mixed; strangers filled her inbox with rage. “Most of the protagonists I’ve worked with in my shorts had some access to oppression, which made them othered. I was studying how whiteness moves through otherness, but, by being in a white body, you can also manifest it.” Many of Bravo’s films feature mostly white casts. This is partly by chance, as she came to know many of her actors as friends first, like Cera, or once-partner Brett Gelman, who co-wrote and starred in her debut feature Lemon (2017). 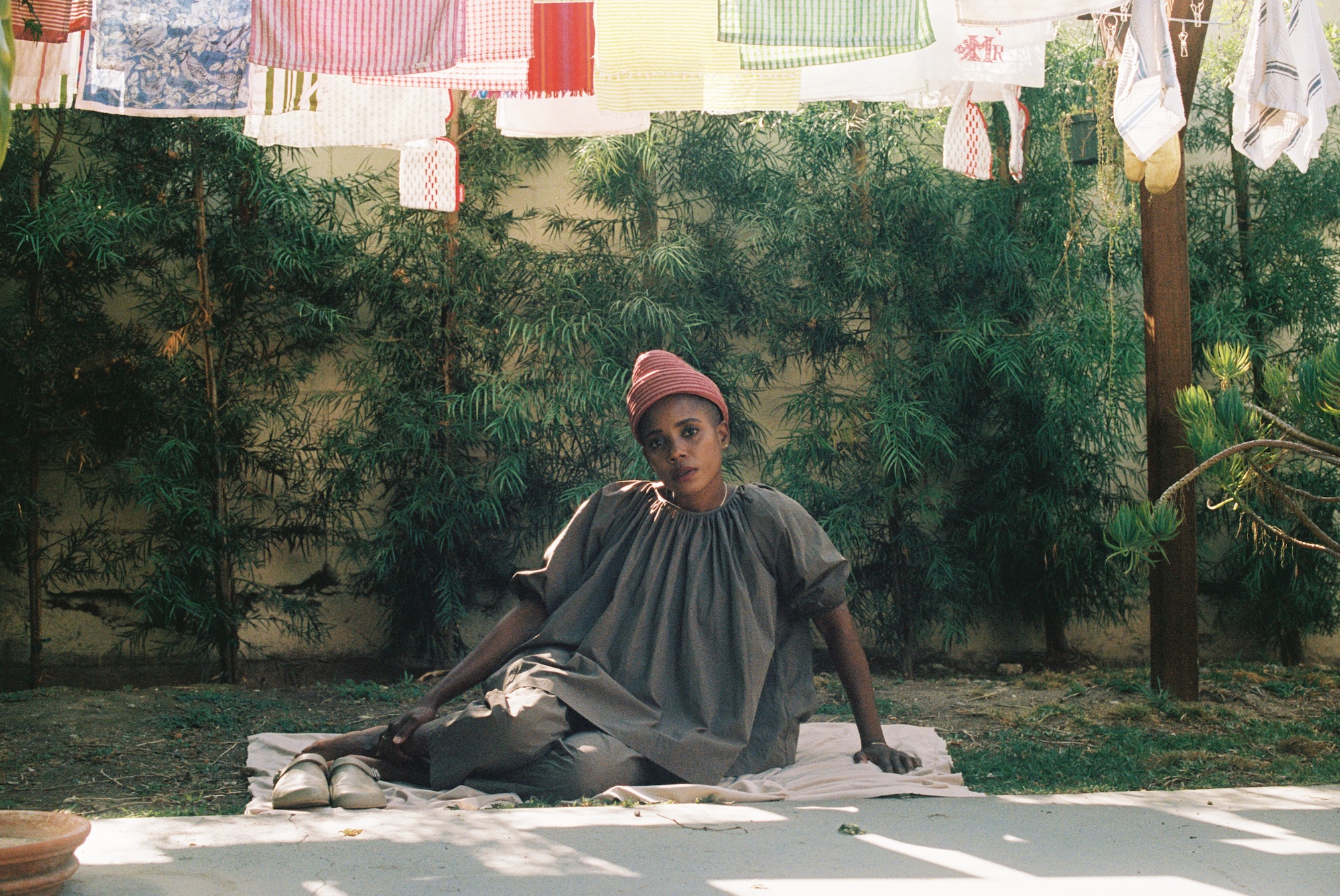 Gelman plays Isaac, a bitter acting coach who imposes his slimy behavior onto everyone, especially the cute make-up artist Cleopatra—a patient Nia Long. She’s the only one who has any empathy for him, but is forced to cut things off after he tries to kidnap her grandmother at a family barbecue. These are not white movies, despite the white faces. Whiteness could not have this perspective on itself. It can’t know how suffocating its presence can be. The drama of Douglas Sirk or the absurdity of David Lynch come close, but it’s Bravo’s laughter that is most convincing. “I wanted to engage with white visibility moving through the world. Like, yeah, how do you violently move through the world in a white body without abandon?”

The first time Jeremy O. Harris heard Janicza Bravo’s laugh was at a Hollywood party in 2015. Phoning in from Paris, Harris tells me: “I was out with a guy, and he took me to a party at this famous actress’s house. While I was downstairs, all the white people at this party started rapping along to a song and everyone was saying the N-word. I was like, ‘I need to use the bathroom!’ The date was horrible. I went upstairs, and I heard an unmistakable Black laugh.” He followed the sound and found Bravo in the kitchen. Sharing the same sense of humor, they joked about what they’d just witnessed. He quickly realized she’d directed Gregory Go Boom, which he had loved and written about. Harris was entering his second year at Yale when the Zola job came around.

Zola (2020) re-tells 2015’s Twitter epic by Aziah Wells, the story that made her viral. Inventing the longform Twitter read, the thread is a tale of two strippers going down to Florida to work. Like Homer’s Odyssey, or Dorothy in The Wizard of Oz, Zola wants to go home. Entangled in an obsessive friendship with a white girl, she allows herself to be seduced. The plan should have been simple: drive down, strip, make money, go to the beach. Even her roommate and boyfriend would join! What follows is a chaotic sequence of uncovering truths, leading Zola to being nearly sex trafficked, humiliated and held at gunpoint. Her roommate turns out to be her pimp, and her boyfriend a cuck. What?! “I came here to dance” is a phrase she repeats throughout the film.

Harris had to get involved with the adaptation.He was working on Slave Play (2017), which later earned him twelve Tony Award nominations, when the chance to co-write Zola with Bravo came up. Aziah’s story resonated with them individually, but the movie they saw in their minds was identical. “Adapting something is so hard, because everyone has their own personal visualization of it. With us we saw the same thing.” Bravo had one condition: “She told me that she wasn’t going to let me apply to do this if I wasn’t showing up for my education. She knew how hard I’d worked. She was like, ‘If you want to do this, you have to finish your second year project before we start.’” He finished the first draft of Slave Play faster because he wanted to ensure she could read it and apply to be her co-writer in time. 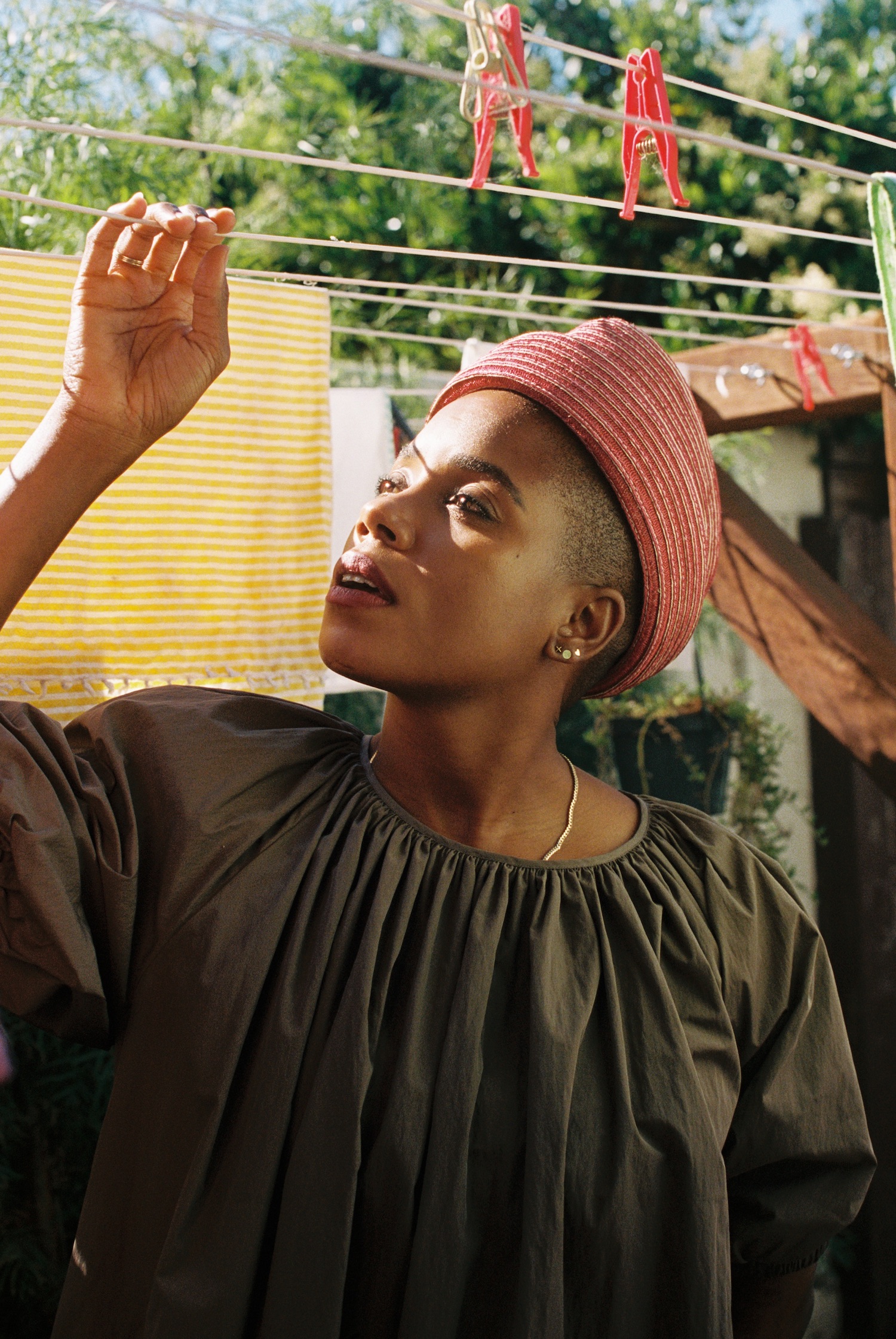 Slave Play follows three interracial couples attempting to exorcise the demons of sex, race, and history from their relationships. The production disrupted the hashtag #slaveplay, a thread first used for sexual race play online. Harris refers to his time working with Bravo as “artistic and intellectual boot camp,” something that helped him develop the rigor needed to later take his play to Broadway. What were the stakes? “We wanted to say that, no matter what you feel or don’t feel is true about Aziah’s story, at the end of the day, this was a young woman who was lied to.”

Janicza Bravo makes Black movies, because she is a Black filmmaker. Her work may not satisfy representational appetites of the moment, but who cares? Enough has been written onto the Black bodies we see on screen, Ryan Murphy. “I knew I had to be the one to direct this. Who else was going to protect this woman?” Harris tells me she’d already directed it before getting the job.“She had a Dropbox folder for every gesture she thought each character would make, lighting references, costume references, interior references. It was like the film was complete.” Seeing is not listening, and Bravo must be heard. Her voice is in the writing, shooting, editing and styling.

Black authorship is often discredited, especially online. Unsurprisingly, Wells’s story came under question when it was first published. Bravo remembers, “I’d read a handful of articles in2015, and every article questioned the validity of her story rather than speaking to what happened, the horror of what happened. So for me, the Twitter thread was gospel. That is what it is. I’m going to tell the story as she put it.” Bravo succeeds in this, the film reading as a copy and paste of the original text. The editing takes its cues from swiping around online, and the problem of text-on-screen is solved through the use of soliloquy. Like scrolling your feed, the film entertains, concerns and wonders—all at once.

Stefani—originally called “white bitch” in the thread—is played by Riley Keough as the pink, final-form bimbo meme. Evil incarnate, with hilariously sticky and sweet tactics for manipulation, she infantilizes herself to evade any responsibility and cares for no one’s safety—not even her own. Sure, she lied, but she’s lying to herself too. Her over-use of AAVE (African-American Vernacular English) is funny because it’s humiliating, causing what people online would call “cringe.” It backs the viewer, and Zola, into a corner. At certain points in the film, I can’t tell if they’re going to kiss or hit each other.

Is there something gay about female friendship? Bravo thinks so. “This was really something that went on in my 20s. I would meet certain women and I would fall in love with them. It was somewhere between platonic and romantic. I wanted to share a bed with them, eat every meal together, even bathe with them. I wanted them to know every story that I had to tell. Then, at a certain point, we’d never want to speak again.” In the world of Zola, a dimension just next to ours, we get a look at the recent past through a fun-house mirror.

This film is about watching Taylour Paige’s face. As Zola, she’s a watcher, a visitor who doesn’t plan on staying long. She reminds me of Johnny in Gus Van Sant’s Mala Noche (1986), the loner Mexican traveller who doesn’t speak the language but manages to be the object of a white clerk’s obsession. Like a performer from the silent era, Paige’s face communicates it all, whether she’s afraid, listening or calculating her next move. In the film, she asks: “Who’s looking out for me?” Both she and the audience know it’s just her. And though we see Zola’s trauma, we also see her make it through the night. We watch her out-earn the pimp, relax in the Florida sun and, in the film’s most beautiful moment, we see what she came to do: Dance.

Bearing witness to trauma is something we’ve gotten used to as viewers, in the name of representation. Complexity is often conflated with seeing how much someone can endure. Bravo treats her characters fairly. Did Zola know what she was getting into when she met Stefani at Hooters? Maybe. “There was something chemical between them,” she says. “That is what pulls her to the adventure. Unlike Dorothy, she makes three enemies, not friends. What’s put on trial is her agency, which is why I call what we did a retelling. In the adaptation, she claims agency on this experience.” Zola’s a narrator in the Shakespearean sense, the character next to the chaos. But, why does she stay? Janicza Bravo can only speak for herself: “I have been on some questionable adventures, and I’ve always had faith I was going to make it out. Doesn’t a sick part of you want to see how it ends?" 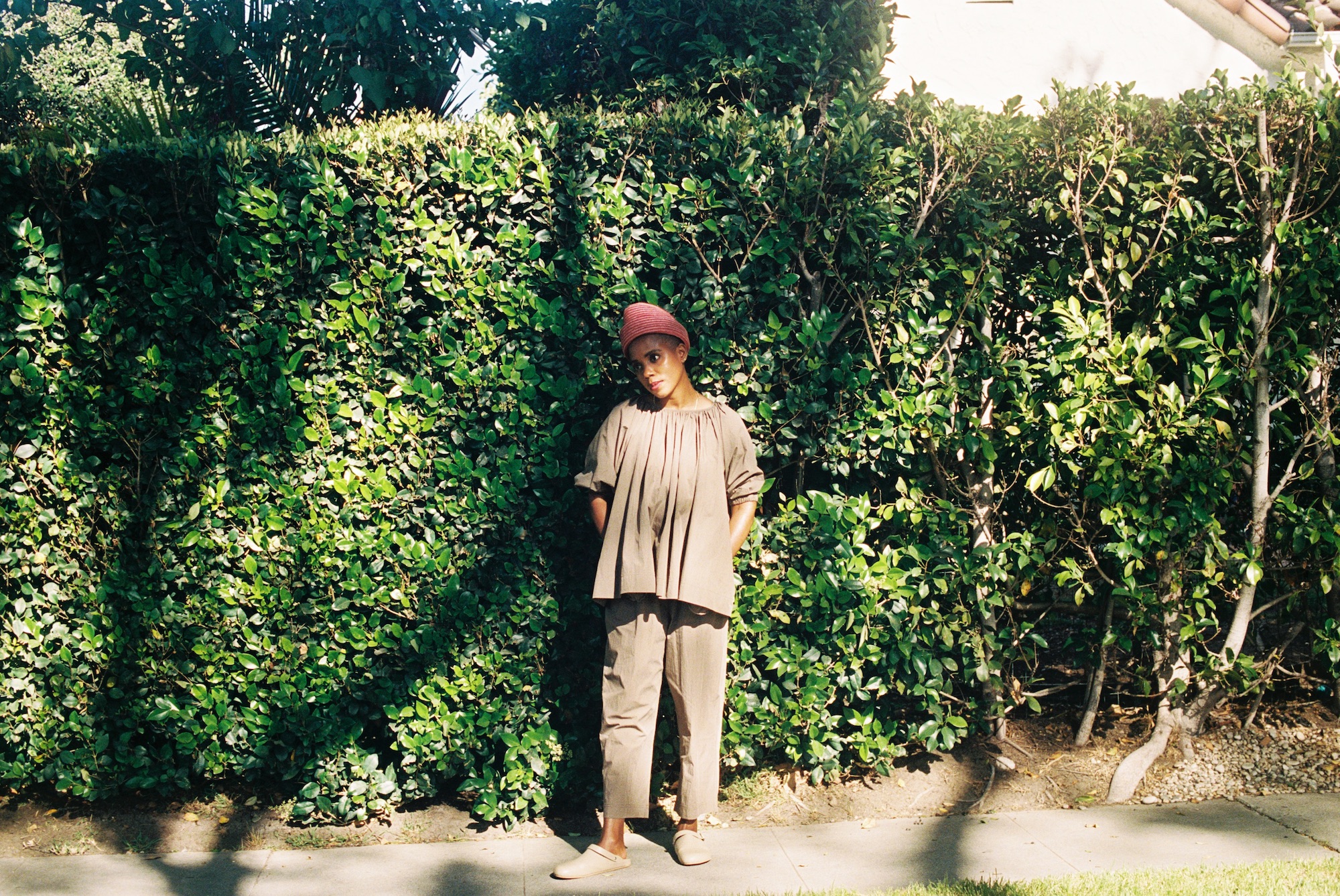