Ahead of her first solo show in New York, Andrea Marie Breiling shares her love of driving across the city’s bridges, and how spray cans have helped her break free.

Los Angeles-based painter Andrea Marie Breiling has been pushing her work along at incredible velocity lately. The works I first noticed on Instagram a couple of years ago were gutsy, densely packed abstractions redolent of Willem de Kooning, Per Kirkeby and Joan Mitchell. By last year that had changed. I was seeing works that were faster and leaner—more optical, less material. But that didn’t prepare me for what I saw when I visited the studio in East Williamsburg, Brooklyn, where, in the wake of her show last fall with Night Gallery in Los Angeles, she was making the work for her solo debut in New York, “Eyes to the Wind” at Broadway Gallery: big, tumultuous blasts of ecstatic color and hazy line done solely with spray paint, but no, nothing like graffiti—closer, as she says to J. M. W. Turner. How, I wondered, had she moved so fast?

Barry Schwabsky: Let’s start with the basics. Rilke writes: “Beauty is just the beginning of a terror we can barely endure: we admire it because it calmly refuses to crush us.” What do you think, true or false?

Andrea Marie Breiling: It’s true. There is something about longing that happens when one witnesses anything profoundly sublime or beautiful.

Music does this so well. It conjures a feeling that we once had, and perhaps simultaneously have never had, but long for. Which feels like terror, but yes, a terror we long for and can endure and continue to endure because I believe it’s true that it is not crushing. It ignites us to continue seeking after something.

Time and time again with my painting this happens and maybe that’s why many like myself know we can and will do it until we die, because of that endless terror. Georgia O’Keeffe said she’s terrified every time she comes to the canvas. It is the same for me, but it’s exhilarating in a way that not even the most potent hallucinogens can muster up. A dive into the unknown and hopefully a dive into the sublime. The sense of longing for me is what makes the dark days have light and hope. In this work for me particularly, I felt a shift in my zone or vortex of making, having just come out of making a body of work during the beginning and daunting stages of COVID, and then through the Black Lives Matter protests, the work held a different sentiment.

In this body of work I returned to myself for the first time in forever. Looking and longing for something better. For something mysterious and not yet known to me. I wanted to make work that was uplifting. Looking for miracles and a longing for something beyond my imagination. When I finished one of the first works of this show here in my Brooklyn studio, I remember feeling overwhelmed by not understanding what I had done and yet feeling alive in the beauty of it. Something I’m not quite sure I had ever done before. It felt like a spiritual rebound and a return to God.

BS: The way you made these, without brushes, it feels like you breathed the colors onto the canvas. Like you made them by exhaling. And then, especially with the big scale of them, the way they seem to surround you like an atmosphere, it almost feels as if I breathe them in, in turn, rather than see them. I think about how one of Jackson Pollock’s last paintings is called Scent. There’s a beautiful aspect of abstraction, how color and form and space, unanchored to a definite image, can sort of seep into you, corporeally.

AB: In my first solo show at Night Gallery, the work was bold and colorful. It was made with brushes and the gesture was essential. What was problematic for me was that the audience seemed to get too caught up in the apparent art-historical references, particularly in abstract expressionists, like with Pollock as you mention. I found it unsatisfying, and it left me wishing that experiencing my paintings was more emotionally consuming, rather than a painting show about painting itself. I felt an overwhelming desire to dive deeper into exploring mediums and how I had been using my energy to create my work. How could I make work that sucked people in and lifted them to a higher state? A spiritual place itself and not a place of painting for painting. A full-bodied experience, poetic moments, a levitation. As after all, the experience for me making them myself was like that. Making paintings is always a transcendental experience. I decided to pull back, to travel and play with materials and figure out how to accomplish this. I was looking at artists like Morris Louis. I began figuring out how to stain the canvas. I was in Mexico City and Upstate New York and made many attempts at discovering a way to approach the canvas without the brush. It wasn’t until I got home to LA and someone had returned an old box of spray paint that I was like, oh maybe this could be the key. I began playing with it and soon realized I could use my energy to create things I couldn’t before. I could create an atmosphere I was looking and longing for.

Maybe creating an atmosphere wasn’t my initial intention with spray paint, it was more about Greenbergian “paint and surface”—how to handle surface without a brush and still be able to tap into my strengths as a painter. Self-telling, physical, aggressive, improvisational, automatic and still allowing room for a certain amount of control. It wasn’t however, ’til I got to Brooklyn in Autumn 2020 that I really dropped everything—other materials, acrylic, Flashe, oil, etc.—and began just making the work with spray.

With this monumental shift it really felt that everything began to open up for me.

My studio suddenly stopped being a place of material investigation and became an adult play world, full of night after night of just letting myself get lost in the color and choreography of paint and the canvas. I was finally in many ways seeing paint do things I never knew it actually could. The work was almost painting itself—one of the most satisfying experiences I have had as a painter. The way I was able to create atmosphere suddenly had me thinking more about Turner and less about de Kooning. Something I subconsciously needed had been unlocked. I was fascinated by what I could do with a spray can. I had a massive palette and a huge variety of spray tips, and mark-making was now taking me on its own path of discovery, it seemed and felt. Shifts in my choreography allowed the rhythm of my energy to be in charge of the work. I was able to keep what was important for me in a brush, but with greater speed and control. It felt like a dream cocktail, for lack of better words, and I knew I was onto something. I finally felt the work becoming more of a psychedelic experience, wrapping up the viewer like a drug; a full-body experience, beautiful and emotional and sublime, and no longer a conversation about painting.

BS: Your reference to Turner makes immediate sense—the sense of light and space. But it also makes me think of something else: Turner’s work represented a turning point in technology and how it was affecting perception: “steam and speed,” to quote from the title of one of his most famous paintings. It’s self-evident that we are living through a technological turning point too. I’m thinking now about how I first got to see your paintings on Instagram. Those paintings were more geometrically constructed than the ones you made in Brooklyn, and I guess they used more different ways of applying paint—not only the spray can, as you say. But still, I think you were already moving away from the more evident tactility of the paintings you’d done just before that. Do you think this new, less tactile aesthetic is linked to how we see things more on screens now, so that our field of vision is less linked to identifying things that might come to hand? Or is that a whimsical connection of mine?

AB: A vision of things to come—that definition of Turner’s painting is almost the exact feeling I had making this work. But more crazy is that only after I made Lucy in the Sky, one of the first works in this show, did it become apparent to me that the bridges of New York were influencing the work. I drove across the country from my car-centric city of Los Angeles to the opposite: the subway/ walking-centric streets of New York. Regardless I was determined to have my car with me in this city as well. Being alone in my car with music and a private space is essential to my existence. It’s healing; it’s spiritual. But, I didn’t realize that it would also be so visually exhilarating; from the Kosciuszko Bridge to just being totally immersed in the city itself.

The feeling of things to come was the rise that would come over me every time I drove over any bridge. The rise of something better, a shift, a miracle. The atmosphere in New York was not only so different, but like Turner, I was having my own visceral experience with light and speed and just even with the changing lights of the bridge and the city itself.

As for whimsy, I would say my actual state of making when I am in the zone is actually very serious. I get in very late, no heat, the windows open for ventilation while it’s snowing. I’m smoking, I’m chain-smoking and then there is loud music, loud and electronic, sometimes almost new age. An upbeat rhythm really sets a tone. An overwhelming amount of chaos comes crashing in on me, things feel heavy and it’s time to use those sensations. Sadness, fear, happiness, heartache, bliss. I’m energized, color starts to take over and bring me satisfaction in ways that transcend pretty much any feeling. They all get laid out into this thing in front of me. Flattened out. Everything becomes one. Color feeds new life into an echo or a longing. And the bridges, the speed of the light that New York has, the intensity, all of that. The intensity is a challenge to me in a wondrous way.

So I think my work is about an orchestrated time to dance, to evolve, to transcend all of this energy in a very serious un-cyclical and non-lackadaisical way. The moment I step away from the studio is actually when I become whimsical. People say they love having me around because I am always laughing. I think this is in part because most of the time I’m actually in a constant state of agony. Agony to get to a place, the carved-out space of release that is in my studio. The place I feel most myself, most at peace—the peace that only transformation can provide. A meditation in non-thinking, just breathing and pushing color around. The moments I’m not thinking are actually when the work is the best, and I actually am at one with myself and my autonomy. 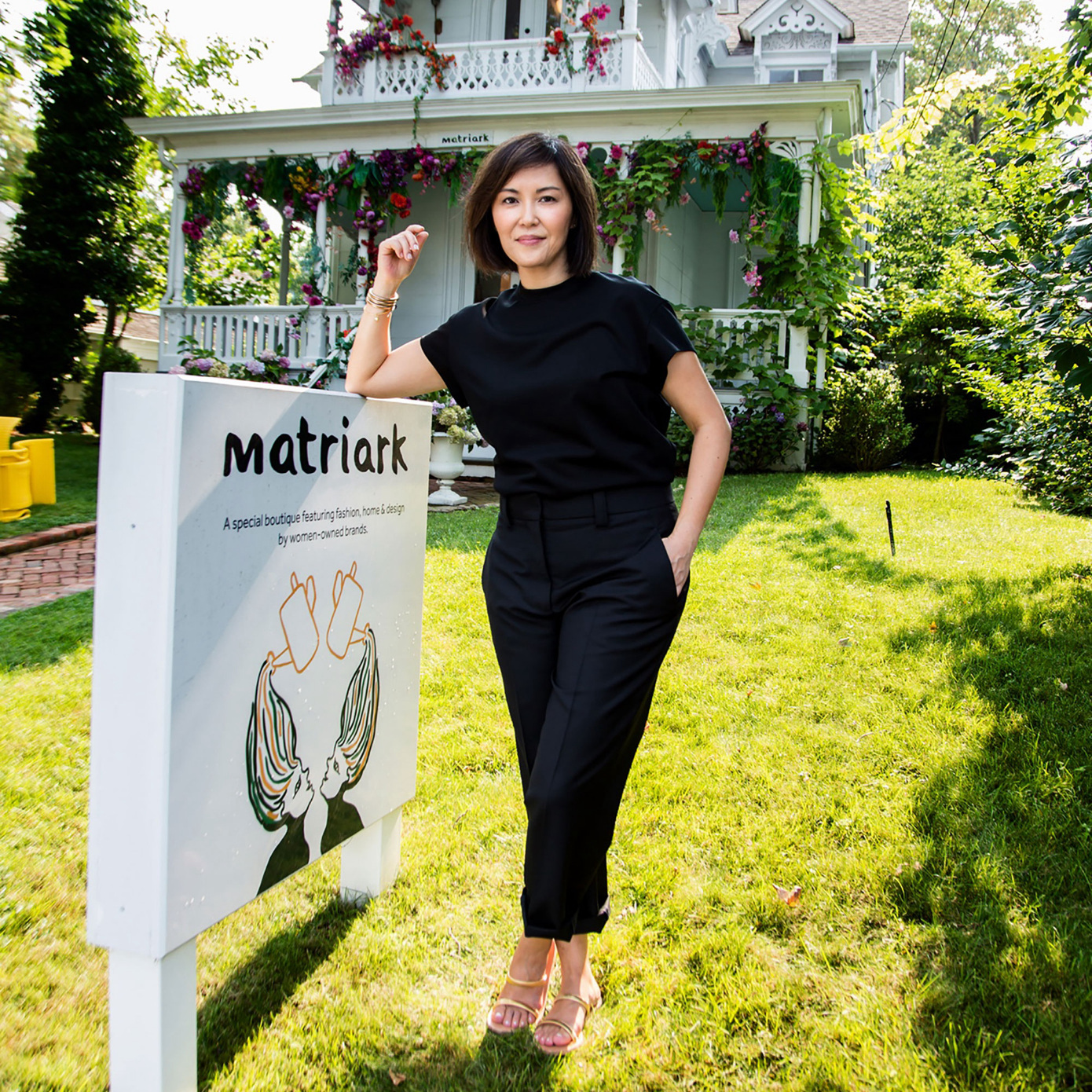