Brought up on creativity, collaboration and a bit of competition, Zal and Rostam Batmanglij are closer than ever and the toughest judges of each other's work.

Brothers Rostam and Zal Batmanglij live just one hill apart from one another in Los Angeles. When we spoke over Zoom in January, they were fresh off of a highly important family bonding activity: Zal’s dog, Sci-Fi, had just met Rostam’s dog, Rahm, for the first time since Rahm was a tiny puppy. “Not Rahm like Rahm Emanuel,” Rostam clarifies. “But I guess I have to be okay with him being one of the most famous Rahms until my dog becomes a celebrity pup.”

It’s not such a ludicrous possibility. Rostam’s profile has continued to rise over 15 years in the music industry. After getting his start as a foundational member of Vampire Weekend, serving as a multi-instrumentalist and producer, Rostam branched out as a solo artist, releasing a widely acclaimed debut album, Half- Light, in 2017. His music is distinct, sparkling—he has a fondness for fusing electronic music with the classical, his bright songs twinkling with harpsichord and sitar. He has made albums with Ra Ra Riot’s Wes Miles (a project called Discovery) and the Walkmen’s Hamilton Leithauser. And he has produced hit records for countless artists—Frank Ocean, Maggie Rogers, Clairo, Solange, Charli XCX, Haim (he added the saxophone line to “Summer Girl”). During our interview, he was gearing up for the release of a new solo single, “These Kids We Knew,” accompanied by both live and animated videos. An album is forthcoming.

His older brother Zal is a filmmaker, his dog christened after his preferred genre. Zal’s films, Sound of My Voice from 2011 and The East from 2013, and his Netflix series The OA (all collaborations with actress and writer Brit Marling) tend to center around cult- leader-like figures. With characters searching for some kind of spiritual meaning in the modern world, his work burrows in the cracks of contemporary capitalism, and has been both made and embraced with a kind of religious fervor: when Netflix canceled The OA in 2019, the fan campaign to save the show was so intense that one woman even famously went on a hunger strike.

“To me, there was something really brave about that young woman. And the fact that she was a woman, she was young, and she was hunger striking over a television show,” says Zal, “people thought that that was so ridiculous. But when you dig deeper, it wasn’t really about the show. It was about her place in the world. She felt really traumatized by the world, something that I think we all now agree with her is unequivocal. We all feel a little traumatized by being alive.”

Zal was born in the South of France in 1981, where his parents had moved from Iran, following the revolution. The family then settled in Washington, DC, where Rostam was born in 1983. Their mother, Najmieh Batmanglij, writes widely admired Persian cookbooks, published by her husband, Mohammad; fans include such culinary heavy hitters as José Andrés and Yotam Ottolenghi, who dubbed Najmieh “the goddess of Iranian cooking.” The books are a collaborative effort, and Rostam and Zal proudly call their parents artists.

“Even though I make music, I think of it as making art,” Rostam tells me. “To me it’s all kind of like one project. And so I think my parents are an inspiration for that outlook.” 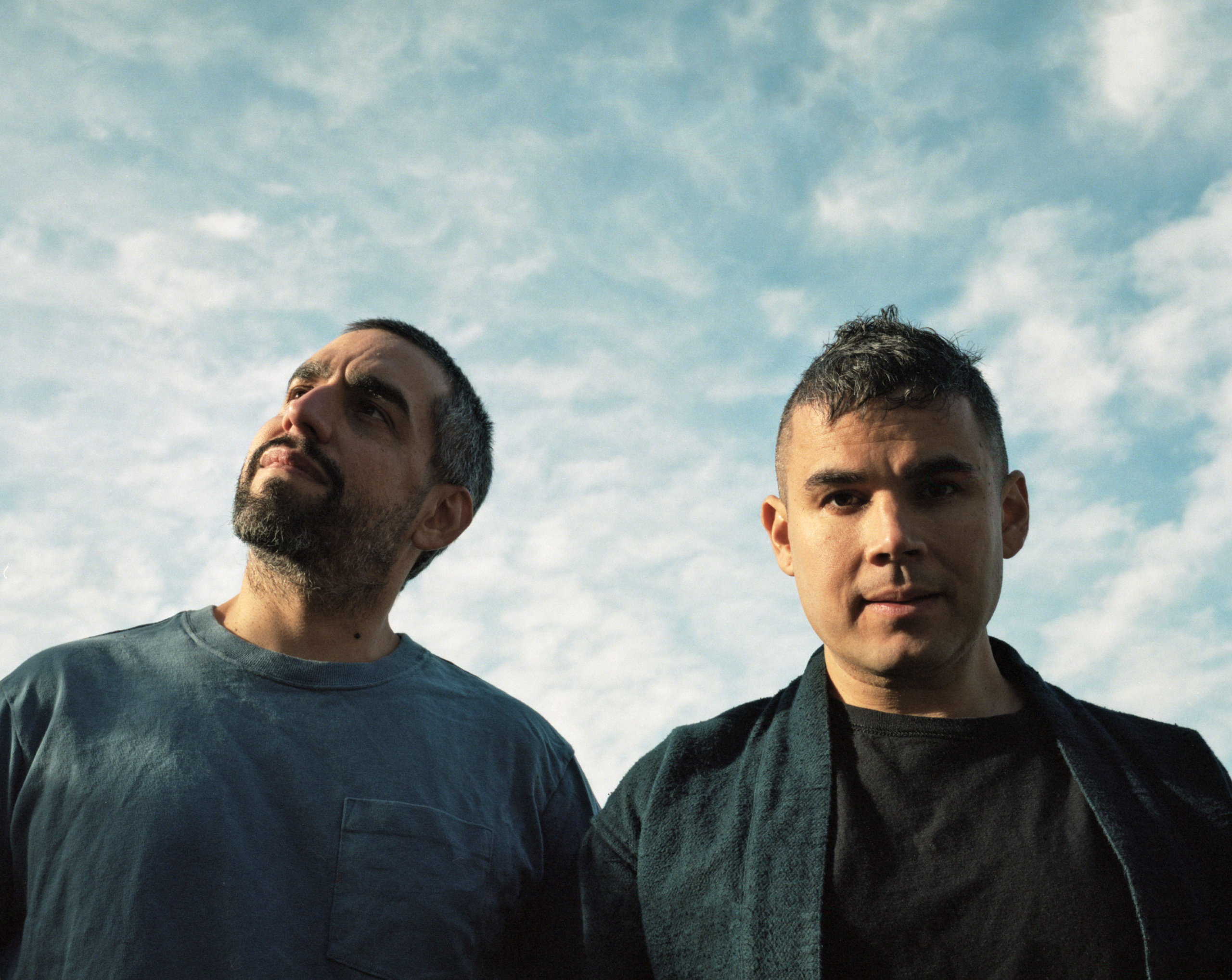 The Batmanglijs immersed their children in art and culture, regularly taking the kids to museums. The boys would sketch together in front of the TV, splayed out over one enormous drawing pad. When Zal was a toddler, his parents even tried taking him to the opera. “I think it ended because I got too scared at Don Giovanni, and so Dad had to drive me home and missed the opera,” he says with a laugh. “So, I think that’s why they didn’t pull that same stuff on you, Rostam.”

The Batmanglijs even held regular drawing competitions, in which each member of the family would have to create a family portrait. “Some families spend an afternoon posing for a Christmas card,” offers Zal. “We sort of drew our own one and didn’t send it to anyone. I think that’s another hallmark of our parents—that it was sort of for internal enjoyment. It wasn’t creativity as sort of an external process.”

“Well, it was a competition,” says Rostam, laughing. “There would definitely be a winner. Maybe that’s not like other families.”

As children, both Batmanglij brothers enlisted one another in creative projects. Zal forced his younger brother into early experiments with film and performance, making Rostam play piano to score plays in the living room, often centered around the wearing of an elaborate wolf mask. And Rostam and a cousin were Zal’s first actors, starring in his home movies. “It was hard for me to not laugh in front of the camera,” recalls Rostam. “I think I was always a little bit camera-shy. But we tried.”

Rostam even picked up his first instrument because of his older brother. Zal played the clarinet, and Rostam, inspired at four years old, wanted to play the flute. His hands were too small for the instrument, and thus he started with the recorder years ahead of other kids, forced into it in elementary school. Memories of important times spent together include a high-school–age Rostam visiting his older brother in New York City. It partially inspired the younger brother to move to the city for college, where he co-founded Vampire Weekend while attending Columbia. Rostam also fondly noted that his older brother took him to see Cruel Intentions, an experience that, while perhaps not as explicitly life-changing as the New York trip, was surely formative. Watching Sarah Michelle Gellar snort cocaine out of a cross necklace seems like a recipe for fraternal bonding.

As adults, Rostam and Zal have collaborated; Rostam wrote The OA’s theme music and contributed music to Sound of My Voice. You can see easy similarities between the two—they both speak slightly formally, choosing their words slowly with great care (Rostam even once had an internship at the Oxford English Dictionary, helping to define very 2000s terms like “crunk” and “party foul”). They count on each other’s responses to their work. “Rostam’s opinion is maybe the opinion I hold the highest,” says Zal. “So I want to show him [my work] last, not first. I don’t know if that’s good or bad. I guess I don’t need to put a value judgment on it. He’s a tough critic, but also a great critic.”

“I played my record for Zal probably too soon, before it was finished,” muses Rostam. “And I found his notes to be painfully good. And at the same time, I think something that’s been harder for me to acknowledge in the last five years of my life is that everyone in my family is critical, and not everybody in the world is critical. And it is something that I have learned in myself, that I need to be very careful about, because having really strong opinions—it’s this beautiful gift and it can also be a terrible curse.”

Those strong critiques, like most everything else, have seemed to matter a little less in the wake of the pandemic. When we spoke, LA’s COVID-19 case numbers were spiking, citizens of the city terrified and stir-crazy. Rostam tells me that initially quarantine had provided the space to focus on his new project, but that he was of course ready for it to be over. Zal has enjoyed having the time to watch things (he recommends the Brazilian films Bacurau, Aquarius and The Invisible Life of Eurídice Gusmão), saying he has felt newly reconnected to stories and how important they are.

The pandemic, while uniquely horrific, has forced us all to reexamine how and why we live the way we do. It’s a theme redolent of Zal’s work.

“All of this is just such a high project,” he says. “It’s hard to really understand what we’re inside of—not only the pandemic, but the American political landscape and the movement that’s been happening, the many movements intersecting together. [I’m] trying to honor this transformative period and try to not cling on to the past too much, which I think is really tempting, especially in work that I do...-I’m just trying to sit in the unknown.”