It is no secret that the true “work” of the contemporary artist is not so much the making of art, but the optimization of the ways in which the self is packaged, presented and sold. Carefully constructed professional plot-lines come complete with their own symbols and languages, and just the right alchemy of accessibility and obscurity. Such tools and terms comprise the personal playbooks with which artists brace themselves for the industry’s transactional underworld of media placement and market appeal. Kudi, however, would prefer not to be called an artist. “Our desire for titles totally overshadows what gives that title meaning, which is us,” he offers calmly from his studio via WhatsApp, one London evening for him, New York morning for me.

Kudi is both loquacious and extremely knowledgeable. His cutting curiosity about the world continuously steers the discussion away from him and towards topics that, despite this being an interview, he seems to feel are more pressing; the clock runs out on the allotted window for our call when we’ve barely covered half of the questions I’ve prepared. A simple opening inquiry about where he’s from somehow lands us exchanging personal anecdotes about perspective, alienation and the terrifying myopia of partisan extremism. In fact, Kudi views his entire practice as an exercise in interrogating (and hopefully shifting) perspective—a task he admits can be close to impossible. “Everything we’ve grown up around is our reality. When you ask people to look at another perspective and challenge their own reality, the difficulty is that you are asking them to challenge who they actually are as a person.” 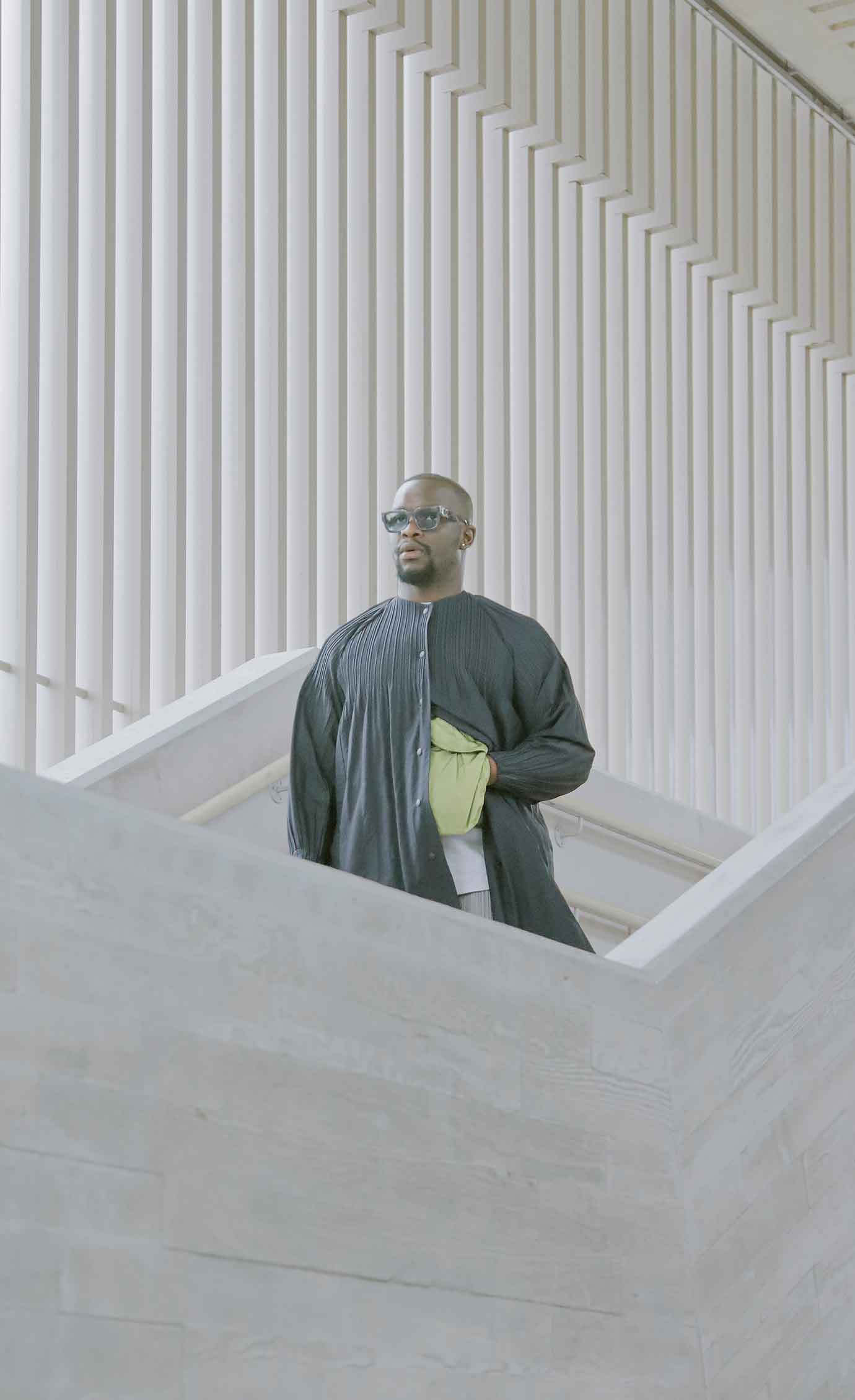 In my experience, such insights are often only gleaned directly from life, from intimate encounters with estrangement and reinvention. Kudi was born in northern Nigeria to Pentecostal Christian parents with professional backgrounds in the sciences. In the late ’90s, when he was just five years old, his family moved to Tottenham, a north London neighborhood home to sizable Caribbean and West African diasporas. Almost a decade later, he was uprooted again, settling this time in the countryside town of Devon, where he, his parents and siblings were the only Black family.

Kudi did not go to art school, which is evident from the clarity with which he discusses the peculiar hierarchies that the art world creates and maintains. Instead, he chose psychology. His life experiences, he explains, gave him a unique ability to observe and understand how people are able to exist in “bubbles”—how the parameters of our daily lives affect our ability to comprehend, let alone empathize with other points of view. But his interest in human cognition began to extend beyond the realm of perception and into the physicality of our surroundings and the objects that fill them. “Why do certain materials have certain race and class connotations?” he poses, rhetorically, framing the main intersection of both his worldview and his growing body of work. “The question starts with furniture and scales up to architecture. Each of these things plays into our understanding of meaning and identity.”

A sculpture called “Blue Collar/White Collar, 2020” for example, attaches two slabs of marble with a steel scaffolding pole (both materials have been repurposed). The title, a play on class labor distinctions, alludes to the associations each of these materials contain: one of rare opulence, the other of mundane utility. The finished work functions something like a fractal: the mathematical framework for describing how a complex pattern arises from a simple interaction then repeats and magnifies within the world. In Kudi’s work, the tension between materials mirrors an elaborate and abstract system of relationships, aiding in the revelation that all “meaning” is made at a scale that—if examined closely—can be distilled and understood.

Another central (and related) concern is sustainability, a topic that, like his recent work, is inherently tied to the relationship between scale and impact. Like many, Kudi is disturbed by the proliferation of “greenwashed” marketing tactics that deliberately deflect from the calamitous social and environmental costs of a global production system so all-encompassing that we seem to fear its dismantling more than its existential threat. “Sustainability is often oversimplified and attributed to the materiality of the end product alone. But, the operational model through which that thing is made must also be sustainable. If the process itself isn’t sustainable, it doesn’t matter what the final product is made from.” In a moment when knee-jerk social and moral penalizing seems to be our go-to coping mechanism, conversations about sustainability can quickly turn into righteous finger pointing. But, Kudi points out, the blame game also fails to register the interconnectedness of the problem; unsustainable operational processes are tied to hundreds of millions of livelihoods, especially in parts of the world geopolitically disadvantaged by the long-term effects of colonialism, imperialism and capitalism. Though the production of art objects is relatively small fry within the larger global conversation about what most affects climate change, he is determined that his creative practice be truly sustainable (all his sculptures are made from found objects, repurposed or vintage), even if such efforts are more costly and time consuming up front.

Right now, Kudi is working with a luxury suitcase company on a partnership he describes somewhat evasively as an “longitudinal dialogue.” The project—which he hopes will challenge how we imagine the relationship between migration, immigration and travel—will take the physical form of a chair. Chairs, he tells me, represent literal positions of power and control, especially politically or professionally—take, for example, a seat in government, a monarch’s throne or the “chair” of a company board.

It's not the first time this motif will appear in his work. "A Double Entendre" (2020) sets two gilded satellite dishes, adjoined perpendicularly, atop concrete blocks. The sculpture’s title, he explains, addresses contemporary conditions of surveillance, information and value. “Working class communities of color provide so much creative innovation, yet, in a society where data is the new gold standard, who owns the cultural information they put out into the world?” As metrics of influence are increasingly complicated and abstracted on the internet, how will worth be determined, let alone compensated?

Another chair takes as its material three “Ghana Must Go” bags; these highly-recognizable, rectangular nylon shoppers come in several checkered colorways and are named after an association with migrants, who sometimes rely on these cheap, reliable containers to transport their belongings. Here, Kudi interrogates the place of the bag as a status symbol; just as designer purses, constructed from soft leathers and glimmering hardware, have become arbiters of taste and prestige, so these particular oversized totes contain a plethora of perceived meanings about the person carrying them. In 2016, Balenciaga released several handbags in the shape and palette of the “Ghana Must Go,” but rendered with luxury materials and steep price points—a reinterpretation that exposed, if inadvertently, the insidiousness of such social signifiers. How quickly do our inferences about objects map onto our assumptions about each other?

Consistent in his maverick opinions and approaches, Kudi is exhilaratingly unconcerned with the potential consequences of situating his work in the context of a corporate partnership rather than a traditional art-viewing space. As his objective is to be heard, who better to bear his message than a household heritage brand with a global sales presence. “Communication is the most important ‘artistic’ movement of our time,” he says. “Since everyone is fighting for attention—especially online—and communication has become the most valuable commodity, is the gallery the best place for your work to be profound?” Indeed, individuals, media platforms and brands alike wrestle over “audiences,” “consumers” and “markets,” though one might argue that the battle they’re fighting is actually not with each other, but against the compounding speed, cacophony and impossible transience of 21st century life. In a world in crisis, being lurched even further into virtual space by the effects of COVID-19, what are sensible and constructive modes of reaching each other, and where will art, and the “artist,” fit in? That Kudi is more interested in testing the real world impact of his ideas, by any means necessary or possible, is already a contrarian priority in an industry for which exclusivity and esotericism are synonymous with value. “The art world can be like the stock market, he observes, “intentionally shrouded in mystery, its moves played like a game of chess. For the business, it makes sense, but for the audience, it’s detrimental.”