The artist interview becomes a means for documenting this unprecedented time.

When I flick open Instagram, it seems that someone is always live. Galleries, auction houses and institutions are accelerating their turn into journalism and documentary with an onslaught of digital conversations to fill in the creeping quiet. Yet, I find my attention span doesn’t afford it. In the stir craze, I am attracted to things that demand time and focus: books, miniseries and movies are about all I can take, which is why I was happy to receive an email from Ajay announcing his own series of interviews called “Augment the Virtual.” Dedicated, at least for now, to conversations with artists whose shows were closed or called-off due to quarantine, “Augment the Virtual” revels in the slow burn. The episodes are long and in-depth, allowing for the artist to touch upon multiple narratives that exist in the work and how they relate back to the bigger picture. While it isn’t quite the same as seeing the show yourself, while watching Sebastian Black and Ajay in the first iteration, I found myself closing the browser with the same satisfaction as when I really take my time with an exhibition, rather than checking it off a to-do list. 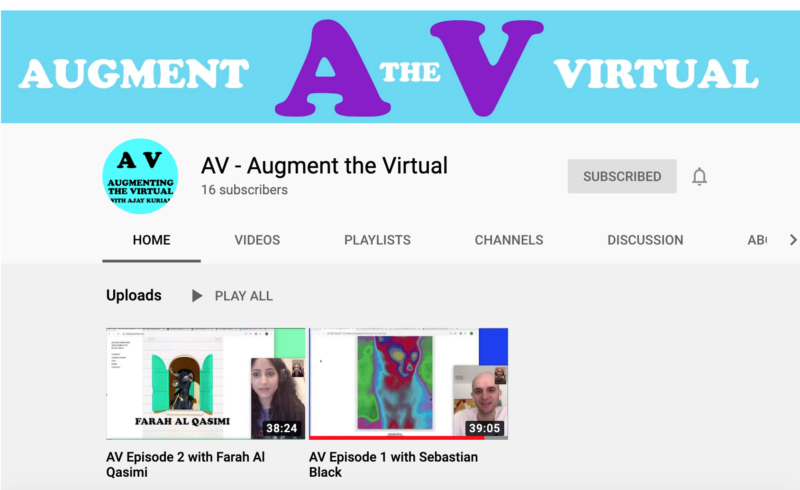 How far into quarantine did you decide to do this interview series? I decided to start it soon after quarantine started. I did my first interview on March 27th.

When preparing for these interviews, did you look to any television hosts? Who would you be if you had to say? Sean Evans from Hot Ones. Initially I thought of Dick Cavett because I loved his interviews, but the rolling conversations of that format aren't necessarily suited for the internet. Sean Evans gets down to business quickly, while also asking questions that are rigorously researched and thoughtfully posed, for the most part.

Galleries, auction houses and magazines have been trying to make the “studio-visit interview” go viral for a while, and now they are back at it with full force. What made you want to pursue documenting artist-on-artist interviews? Do you think artists are inherently positioned to do it better? I've done hundreds of studio visits. Before I started showing work I was organizing exhibitions and realized that the studio visit/conversation was a form I was very comfortable with. I think I can dive into work and find my bearings quickly. I also think that, because I'm an artist, the conversation and the level of mutual understanding reaches further than it sometimes can with a gallery representative or curator. That being said, there are exceptions to every rule. There are certainly people who don't identify as artists who can hold beautiful and insightful conversations with artists. What made me want to pursue this was the simple fact that it felt fun, approachable and worthwhile. Some ideas just snowball faster than others.

Where did the name for the series come from? What were the runners-up? I was thinking that we all have ways of augmenting reality, but what we're faced with right now is an overabundance of screen time, since we can't see or do things IRL. I felt like I wanted to augment the virtual, describe and spend time with things and people in a way that does more than install shots can. The only other title that I had in my head was just a terrible idea. I thought the title should be attention grabbing, so I was thinking maybe the series should be called “CoVids.” In some ways it made sense, but it also felt too callous. My family has already lost someone close to us—for it to seem at all like I'm joking felt deeply wrong-headed.

Why did you feel it was important to document and distribute these conversations? I'm not a fan of live virtual talks. It's asking for a bandwidth I don't have right now. I get exhausted quickly right now and so I just thought of something that I would want. I want a video that I can watch ten minutes of and return to another time. I want something that sticks around, because so many things currently feel fleeting and insubstantial. I'm proud of these conversations and I want people to see them. I'm proud that I can give a platform to these artists, to give them room to speak about what they do and why they do it.

What do you think is lost when the viewer is not able to experience the work in person? How do you feel about online viewing rooms? An exhibition in real life is both for the viewer and, in some ways, not for them. It's not there to become information, it's there to be what it is. When it goes online or is translated into images, it's meant to be easily understandable, clean, digestible. I understand the purpose of this, but poetry is lost. What exactly that loss entails is different for different people. Those of us who have seen hundreds if not thousands of paintings in person can now see images of paintings and know with some certainty whether it's a dry surface, whether it's a thick ground or a thin one, whether it's built in layers of glazes, whether the underpainting happened in stages that were reworked after building up the surface. So what is lost for eyes like that? Sociality, surprise, spatial poetry, different kinds of daylight, different kinds of days, the tone and energy of a room. Some shows are just impossible to properly capture. I immediately think of the artist Trisha Donnelly. Show me an online viewing room of Trisha Donnelly's work that does half of what her work does in person and I'll surrender.

In producing this series, do you feel like you’ve learned more about your friends’ practices? Do you think it will change the way you look when we return to public spaces? Well, for the most part I don't know everyone all that well. I had never met Jessica Jackson Hutchins, nor had I met Farah al Qasimi. I know Brandon but we've never really hung out. Sebastian is the only good friend; I knew I wanted to start with a friend because if I blow it the first time, at least I'm failing in front of a friend. We actually recorded him twice. The first time I messed up the audio. In any case, the more time you spend with anyone's work, the richer the experience is. I don't think it will necessarily change the way I personally look at work, but I do hope it changes other peoples' points of view.

How can institutions, galleries and magazines better serve artists during this time? Do less. Stop thinking everything is an opportunity to seize and just be still and figure out what can really be done to actually help people. If that means there's dead air, just let it be dead air. More is not a relief, less is.

Are you envisioning this project as a time capsule? Or would it keep going post-COVID? I'm not entirely sure. When I first thought about it, I thought it would be a good time capsule. But I guess we'll see.