Remember… cuz it’s all you can do—the words feel like a warning, printed in script on white t-shirts worn by Flannery Silva’s Poser Tube Dolls, frozen in place inside the three photo boxes that serve as centerpieces for her current exhibition at The Gallery @. The question on each model’s shirt is haunting: what’s memory to the doll? A message from the never-living to the currently alive. But remember what exactly? Artifacts of nostalgia are placed throughout the room, arching towards a past imaginary—one that vanishes upon closer inspection.

Flannery Silva’s first Los Angeles solo exhibition speaks in Midwestern motifs (Chevrolet logos, cornucopias, Laura Ashley fabrics…) to a city most well-known for its artificiality. Meanwhile, wigged and face-tuned—not to mention actually plastic—girls stare out from the three photo boxes, each encapsulated on its own grey and pink stage. Though the platforms stand in correspondence to each other, each also serves as its own, self-contained universe. On one, a photograph of the aforementioned Poser Tube Doll poses in her messaged T-shirt; in front of the photo box sits Rat Girl, a curvy purple sphinx in pink slippers. Viewed from another angle we see the doll lying on the grass—is she reclining? The obvious rigidity of the doll’s body gives the feeling of something cast away. Another platform features photographs of a different doll; on one side we see her from the back, posing in pajamas in some distant, opulent interior and on the other a portrait of her face up close—almost too close—lest we forget she’s fake. This platform is adorned with its own unusual object: Jem’s Designs Basket, an oversized half-egg wrapped in clip-art littered fabrics.

The uncanny, the unheimlich, is clearly a foot. Much of the work, and indeed the title of the show, references an online illustrator named ElisaDesign, whose blog features doll-like and creepily baby-faced girls sourced from Poser image-rendering databases and manipulated by the Tube feature on Paint Shop Pro. Silva’s recreations of Elisa’s girls are juxtaposed in a range of settings: a park, a fancy home, a studio set. The photographs themselves are large: the dolls are life-size plus, giving a sense of the exceedingly real. But the images are also inspired by a living-girl: Lolita Richi, the Ukrainian model who first became known at age 16 as a “real life Barbie” and whose internet presence often featured her posing like the real dolls of Silva’s world. Lolita Richi is not quite like other “human Barbies,” who tend to get the title from excessive plastic surgery and rich girl aesthetics. Richi’s doll-like is more awkward, stiff—she poses as if she really were a doll, with the limited range of motion and facial expression that might entail. 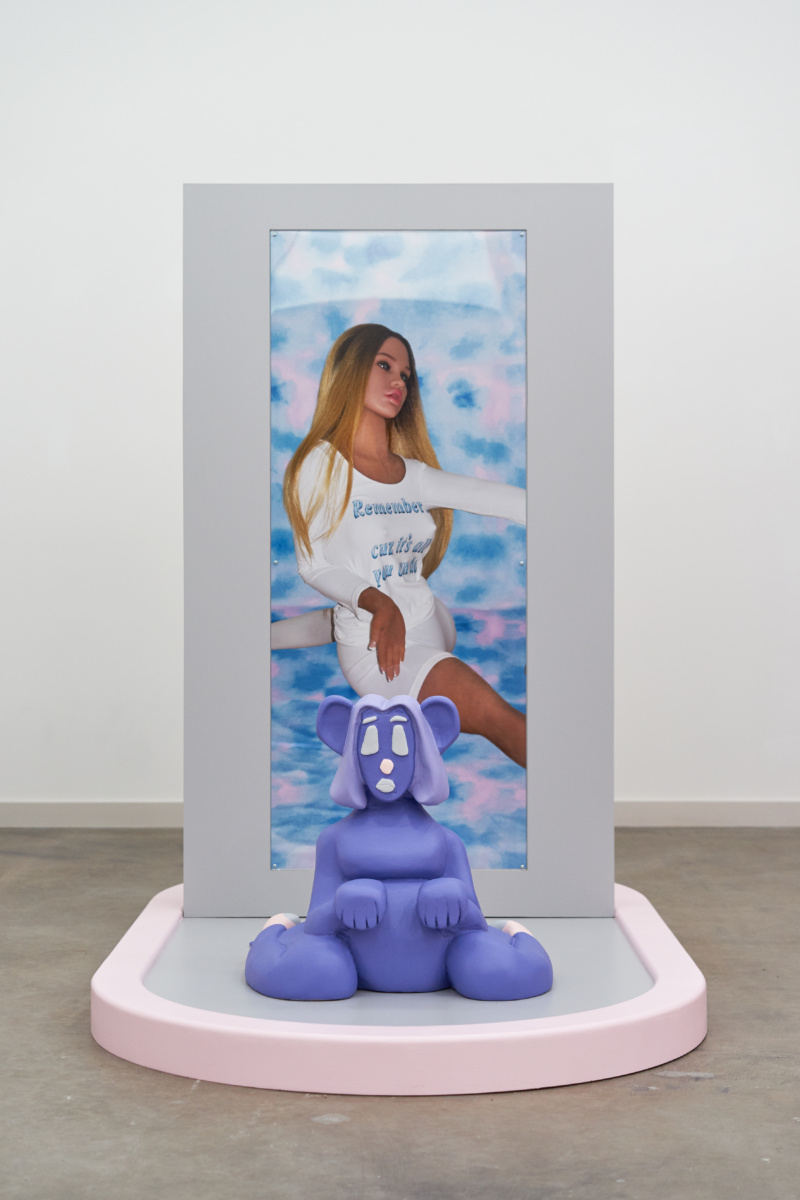 Through these two incongruous yet somehow parallel inspirations, the viewer is pointed towards an exploration of the uncanny valley—Masahiro Mori’s theory that as imitations of the human get closer to the real, reactions will shift from empathy to revulsion—but in Silva’s work we get a rare view of the valley from both sides. It’s not uncommon to see work that exploits this theory to uncover how the evermore humanlike comes to revolt us—and this is visible here, too, in reference to ElisaDesign or the real-dolls of Silva’s staged scenes—but the reference to Richi aims at a less discussed element of the uncanny valley; humans, real-life humans can provoke this same kind of revulsion in us when they incorporate the unreal into themselves. In Mori’s original diagram of the valley, a prosthetic hand is given as an example of this other direction into the valley. From one direction, the non-human moves towards us; from the other, we move toward the non-human.

And what might we lose along the way? The doll’s message of remembering starts to sink in. In a second room, which houses Poser Tube Novelty Slipper Lures, two oversized ballet slippers in a white-to-pink ombre hang from the ceiling by metal chain. At the toe they become fishing lures, and each metal point is reflected ominously in the grey-framed mirror below. In the background plays Poser Tube Doll Anthem, a stop-and-start instrumental that shifts from Disney-esque theme to country western lament. Though we might expect Silva’s voice—familiar from her years in the cult band Odwalla1221—she doesn’t allow it. Instead, Silva provides the viewer with the words so that they can sing along themselves. But what might singing bring? The lure, the doll-like, the non-human? We can only guess, as the lyrics go: I found within the internet my greatest strength and friends, and now I tell you stories until my sunset ends, until my sunset ends…