Perplexed in Public: Lawrence Weiner on the Languages that Have Defined Him

"You might be surprising." Lawrence Weiner reassures me, as we sit down to speak in the garden-level studio of his glass-and-steel Greenwich Village townhouse. I’m wildly intimidated and pretty sure I bore him but he’s too warm, too charming to let it show. Throughout the interview, he alternates between frankness and playful provocation, opining on donkeys who rape women, harvesting ambergris for the war effort, Japan’s comfort women, and how the “cosmetics industry is probably the most useless thing in the entire world.”

As a kid, Weiner would make chalk drawings on the sidewalk outside his parents’ candy store. He describes it as his own little platform. “You grow up in the South Bronx, you learn, you use what you have, and if it’s the wall and it’s a floor, you use it. You can’t go to your private school’s benefit and show them what you’ve just drawn.” But he doesn’t consider those drawings art. Central to his practice is a belief that a work of art doesn’t exist until somebody sees it: “it’s a good intention, but that doesn’t make it art.” The same ethos would inform early works made as a teenager following the lure of the Beats on a roadtrip west. He left little sculpture-offerings along the way and famously detonated a number of explosives in a California state park in what would come to be known as his Cratering Pieces (1960).

Weiner is not opposed to romanticizing those early decades of experimentation and generosity, even as he cautions against fetishizing adventure. His background (“a good public education and no glitch”) meant that not working wasn’t an option, but how he chose to make money was. He explains, “You can take the security of your neighborhood, and your life, and just work in 7-Eleven. Or you can go and find some people, politically, that you’re interested in, and that are anti-racist, and you can get a ticket to work on ships. Make about the same money. But, it’s a romantic choice.”

Today, he’s a giant of Conceptualism, known for making sculptures out of language. But don’t call him a living legend—he finds the term embarrassing and a little inane. (When asked which artists he’d call living legends, he retorts, “none of your business!”) Weiner no longer believes in the linguistic theory of functionalism, but seems to work towards a kind of universal grammar all the same, even as each sculpture responds directly to its context. In contrast to his voluminous speech, his deployment of language is considered, indexical and precise. He sticks with capital letters to avoid confusion in languages like German or Turkish. Of unnecessary punctuation, he notes that it “has a meaning—if there’s no need, why use it? If you don’t have a king ora queen, why do you wear a tie?” 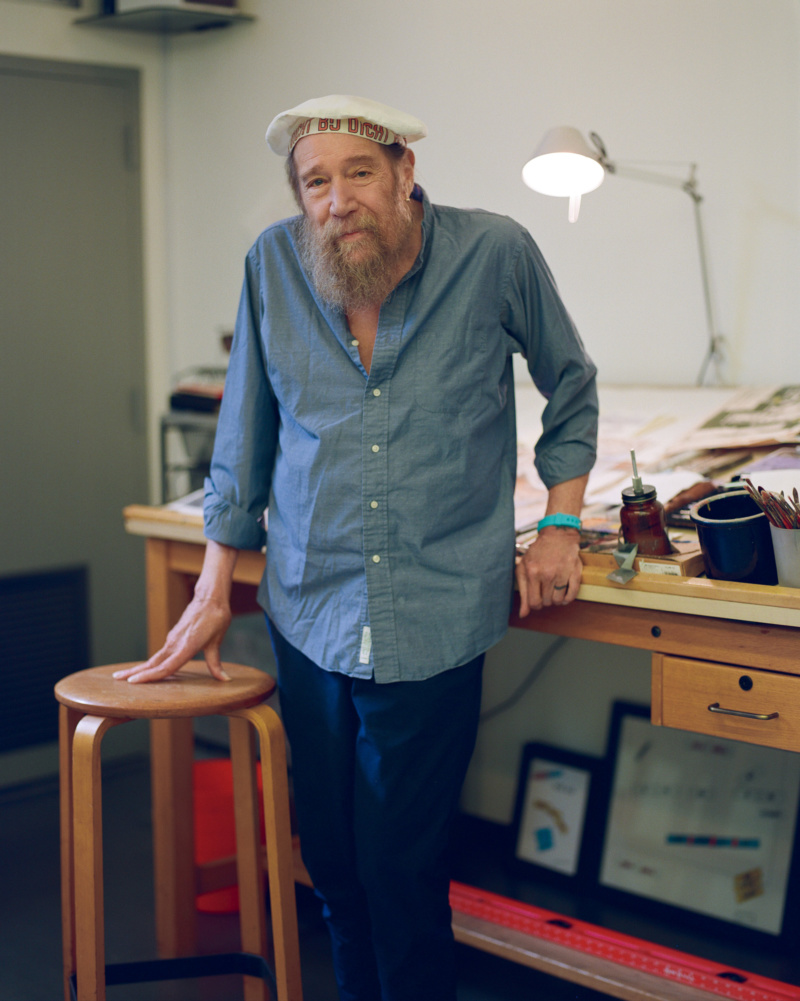 In the 1960s, he learned—and later forgot—an Inuit language after falling in love. Today, he also speaks French, German and Dutch, yet doesn’t consider himself good at languages. “I learn them to be polite. There’s no other reason for me. You work with someone until 2 in the morning and if you can’t let them talk about their own soul in their own language, there’s something with you, not with them.” Both wonderful reasons I think, but Weiner refuses any hierarchy, stating that “everything you do correct is fine.” This anti-authoritarian sentiment is one that recurs when discussing arts pedagogy. He chose not to be an educator because of the assumed authority and would probably be fine abolishing the MFA industrial complex altogether. “I think you can teach art fabulously by just having a regular school,” he says. “Learn physics, learn mathematics, learn philosophy, learn history, and turn around and the art you make has a reason to exist.”

Art, for Weiner, is about sincere communication, not creating spectacle or paying attention. It’s not about skill, but at the same time “there’s a theatrical aspect to art, and you owe it to the people to do it well.” It’s a social contract he compares to brushing your teeth before a date. He’s also troubled by cheating, the narrowing of opportunity and access and the current political situation. “I have no basic moral codes,” he demurs. “I think people should do what they want to do with each other, but there’s a point where it crosses the line.”

He’s disgusted by the camps on the border and believes this is “the end of the age of fat white men being authorities,” but sees his own political involvement as limited to the Civil Rights movement. Speaking of the time, Weiner emphasizes that nothing worthwhile comes easy, whether it’s the hard-won racial progress that now seems to be backsliding, or building an art career.

“Most people don’t realize what a life people had in order to bring about any change. And how frightening it is. But life is frightening. Making art is frightening unless you’ve come through the middle-class system, and you have an art advisor and a counselor.”

But there are so many rewarding moments too: one of many anecdotes involves seeing a woman, hunched and sad, straighten up upon viewing his work. “That’s what I make art for, okay? Sounds corny, but it’s the truth… Here I am. I’m 77 years old and I made it to 77. Whether I’ll make it to 78, I don’t know. I may disgrace myself tomorrow.”