The tradition of the TV anti-hero might properly have begun in 1999 with Tony Soprano. Tony, a New Jersey mob boss and protagonist of The Sopranos, was so unlikeable in deed yet relatable in psyche that he became an all-American proxy for the flawed personae we see in ourselves, or perhaps aspire to. America’s love for Tony spawned a generation of uniquely memorable anti-heroes, from Dexter to Nurse Jackie to Walter White. But even these once fresh subjectivities eventually became standardized, codified, and predictable. Our ambivalences began to disappear. Once we fetishize their flaws, the anti-hero loses their multivalence and settles into delicious horror. What might first have fostered self-reflection and doubt instead reassures our joy in the despicable. Perhaps we over-identified with these characters in an effort to alleviate our growing sense of America’s self-conscious darkness; maybe they legitimized our own complicit villainies. Sure, we’re the bad guy, but fuck it, we’re still the best at it. 2016 shifted that mentality. It’s one thing to feel and embrace the fiction of the gruesome protagonist, but the stakes change when you elect one. The growing exhaustion and brokenness of our public consciousness in the years that followed seemed to render the anti-hero outdated, immature, even ridiculous. Twenty years after meeting Tony, I think it’s safe to say that TV’s love for anti-heroes is, for all intents and purposes, dead.

A new generation comes with new needs, and Euphoria, HBO’s summer 2019 teen drama, ushers them in vividly. Our sense of the world has changed, and the show’s protagonist, Rue, is now our guide. While the pilot seems to pack too much into one introductory hour, it feels purposeful in setting a necessarily complicated stage. We meet Rue (played by Zendaya) in the midst of her inevitable eviction from the womb on September 14th, 2001, three days after her parents bore witness to the largest attack on American soil since Pearl Harbor. She is born a Virgo in a world where trauma has become ordinary. Rue grows up an anxious and depressive child, feeling too much too soon; it seems that these collective and environmental traumas have affected not only on adults, but children as well, though in more diffuse and atmospheric ways.

Rue is first medicated at age eight, bringing on a clinically induced silence that appears a coveted reprieve from the constant noise. As she gets older, the online barrage of violent and disturbing videos and anonymous texts, the rehearsals for school shootings, and the fatal illness of her father all take their toll until life as Rue knows it involves little more than outrunning exhaustion. The montage of grand and minor forms of immiseration make us feel as though we’re on a conveyor belt, zooming through this constantly connected yet tenuous teenage life. Finally, in a break from her confessional voice-over, Rue stares back at us, the camera panning out, and relieves herself of blame. She knows as well as we do that she didn’t make this system.

In her 2011 book Cruel Optimism, cultural critic Lauren Berlant calls our era one of “crisis ordinariness,” in which we are no longer facing trauma with the sharpness of an event but are instead living through the constant precariousness of the everyday. This effectively reframes our contemporary exhaustion as responsive to our conditions rather than the result of our individual lack. We’re strapped for time and money, and at the same time we’re told we need to be more productive, more malleable, more adaptable. People can’t afford basic necessities like food, insulin, or housing. Yet more is expected from everyone and it’s not only physical life that exhausts us, it’s our virtual one too. Berlant explains that today we build new nervous systems based on the “optimism of learning from one’s precarity.”

This is the strained, marred optimism that we find in Rue when she returns home from rehab after a coma-inducing and near-fatal overdose. On the drive home with her sister and mother, Rue performs the kind of joy that is meant to distract you from your own pain, and others from theirs. On this same car ride we meet Jules, a young trans student who is new to town, brilliantly played by Hunter Schafer. She gleams into the frame on a rickety bicycle, with satin pink hair and a furry pink backpack.

The relationship that grows between Jules and Rue is beautifully intimate. Their connection is immediate yet appears resilient and profound; at times it feels sexual, at others familial. Often it is bracingly romantic. For the first time, Rue truly wants to stay clean—for Jules. Her commitment to her new best friend is heartfelt and aspirational, but it nevertheless feels ominous. In the titular phrase, “cruel optimism,” Berlant puts forward that while we’re being beaten to hell by our contemporary realities, we’re still attached to the idea of the “good life.” We form relationships to objects, habits, and even people that we may know are bad for us. Despite not having a clear way out, we choose what feels good at the time. This isn’t to suggest that Jules is bad for Rue, only that to condition the possibility of a drug free life on reciprocal teenage affection is dramatically fraught.

“Cruel optimism” also seems to be the inadvertent drive of many of Euphoria’s characters. After shy, plus-sized Kat loses her virginity on camera, she quickly realizes the currency of her sexuality. She begins making money as a cam girl with a dedicated following of sinister subscribers who she gleefully refers to as her “piggies.” She asserts her newfound authority to a captivated piggie when she states there’s “nothing more powerful than a fat girl that doesn’t give a fuck.” Yet her newly fitted armor and surprisingly source of income don’t alleviate her loneliness; it becomes clear there’s only so much to be gained from this sexual repartee through a screen and behind a mask.

Then there’s Maddy Perez, a child beauty queen turned cheerleader who from an early age bifurcates the world into “people who sit in the chairs with their feet in the footbath and people who kneel in front of the footbath.” Maddy professes her spirit animal to be Sharon Stone in Casino, and, as the cliché goes, ends up dating football captain Nate Jacobs. Their relationship starts off picturesque but soon turns abusive and terrifying as Nate reveals himself to be a violent and manipulative egomaniac. Yet Maddy goes to incriminating lengths to hide his abuse. And if you thought the jock was the problem, when we see the depths of his father’s repression, even Nate can be understood as a self-destructive product of his environment. While showing the world a picture-perfect family and grooming his sons to be heteronormatively successful, Mr. Jacobs lures teenage and often transgender girls to hotel rooms and fucks them on video. He keeps these videos in a highly particular order in his desk drawer. While we pursue one type of supposed perfection, other forms of sickness take shape. These are the kinds of attachments, in the words of Berlant, “where life building and the attrition of human life are indistinguishable.” Attachments that take as much, or more, than they give keep us firmly in their grasp, blinding us from looking at the whole of our life, focused only on perpetuating the part.

Given the many weighty and shock-worthy issues that Euphoria tackles, much has been said of its cinematic slickness and how that might distract from the show’s brazen emotionality. However, it seems to me that Euphoria’s visual form is precisely in line with its content. To tell the story of modern distraction with empathy, conviction, and purpose—without losing ground to those very distractions—is a mission bent on self-sabotage. But Euphoria pulls this off with an aesthetic language that owes as much to Gregory Crewdson’s photographs and P.T. Anderson’s Magnolia as it does to Instagram. 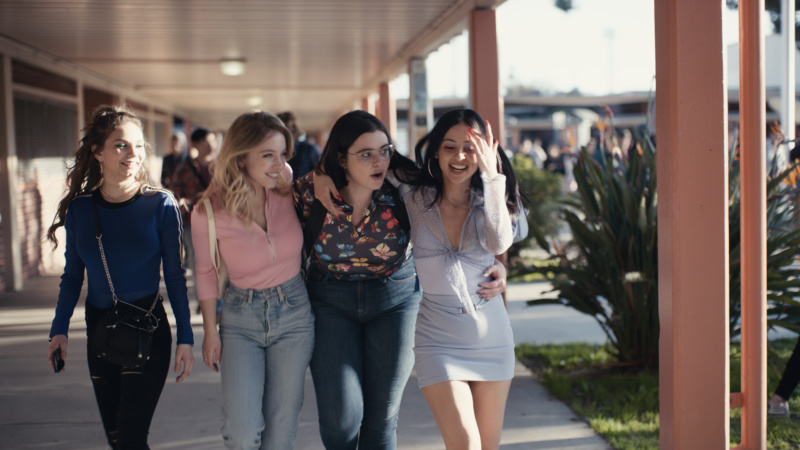 From costume design to lighting, Euphoria’s tone is best summed in the color purple, or maybe more specifically ultraviolet, a hue that is both beautiful and dangerous in its acidity. It can feel hazy and drug addled or pinchingly real. Things can feel distant or all too close. Often, I found myself induced into a visual high or sobriety through the show’s color and movement. The fast camera pans, the long takes, and the more acrobatic camera movements frequently seem to fold scenes into one another, blurring our sense of time and proximity. It’s a little like what screens have done to time, making it difficult to remember what you did yesterday or who you spoke to because you don’t remember whether these things occurred through your phone or in real time. Euphoria’s cinematography feels indebted to that suturing of virtual and real. Switching between melodrama and real drama is part of contemporary fluidity, where the image has an almost quantum relationship with the real. Both can be true at the same time, while distinguishing characteristics constantly reveal and contradict themselves without threatening the overall logic. In this moment, doctoring the image doesn’t necessarily disavow the real.

Behind many of the show’s more charged moments is Labrinth’s single “All for Love.” At various points throughout the show, we hear it shine through like the light from Jacob’s ladder. Fittingly, the season finale ends with Zendaya’s own rendition of the song, which is absorbed into the narrative and then bursts into a choreographed visual and musical crescendo. This choice seems to nod to Bob Fosse’s brilliant and searing musical film, All that Jazz (1979), which recounts the director’s own addiction-fueled life with surreal panache, culminating in his death. Similarly, Rue’s final number leaves her in the hands of a maroon clad chorus (reminiscent of the color-coordinated choirs of Kanye West’s Sunday Service), either as offering or saint. But the tenor of Euphoria’s ending differs from that of All that Jazz because it doesn’t relish in the fulfillment of its own death drive; it continues to fight. While Fosse’s character sings “Bye bye love, bye bye life…,” the constant refrain of Rue’s final scene confirms that this is all for love. The finale left viewers wondering what might ensue next season, but also about more existential questions. Is love what breaks us or what builds us? Is it but another kind of cruel optimism?

One recurring visual trope comes to mind. Frequently, a singular bright light source is occluded by an object or a person. The light is so bright that it appears religious, a beckoning light, a saving grace, and yet it can’t fully actualize. Like Rue, like Jules, who both choked through childhood out of fear, anxiety, and pain, in Euphoria, even that affirming baptismal light chokes on the world.