Writer and Musician Esra Padgett On the Semantics of Noise

Esra Padgett is explaining Bakhtin’s theory of heteroglossia to me: multi-languagedness. “It’s the idea that all language is quotes of other languages, scripts that have already been said,” she says, matter-of-fact and unpretentious, caught on the edge of a grin. Half of the band Angels in America with Mark Iosifescu (sometimes also known as Angels USA, or Miami Angels in America—that’s important, there is always an ‘also’ with Padgett), whole of music project Chicklette, songwriter, DJ (alone as Chicklette again, and also with artist Jeff Joyal as Retail Sauce), teacher, and scholar of linguistic anthropology, Padgett moves seamlessly between these materials, with almost virtuosic itinerancy. I feel tempted to have her write a list of all her different projects with dates and locations; instead, I try to imagine a web, shimmering, sticky. Just when I think I’ve found its edges, another strand appears.

Padgett does it all with a certain ease—not ease as in a lack of struggle, or formal simplicity, but more in the way relief from restriction has its own sharp pleasures; how something falling apart, fraying, also makes it wider, more spacious. Or, in her words: “it’s sloppy.” She’s just been describing to me the tour Angels went on last year to promote their new exultant album, Uptown Funk, released on Ormolycka in February. “We went on tour for a record that wasn’t out yet.” They sold damaged test pressings. “We don’t have merch ever, even when we try to. In the past, we’ve literally sold tapes that people said were blank, but we’re not doing it on purpose.”

For all the absence of purpose, there is a wealth of intention. Undercutting their own recognizability (and, by extension, the band’s functionality in most systems of exchange and commerce) is inherent in the very name, Angels in America. “Most of our titles are also titles of something else,” she says. I am struck with her phrasing, how her “also” resists the traditional narrative arc of the bootleg. There isn’t an original source and a stolen object here, just two things in the world called Angels in America, two Uptown Funks, two Country Grammars. All cultural objects are available, amoeba-like, splitting endlessly. 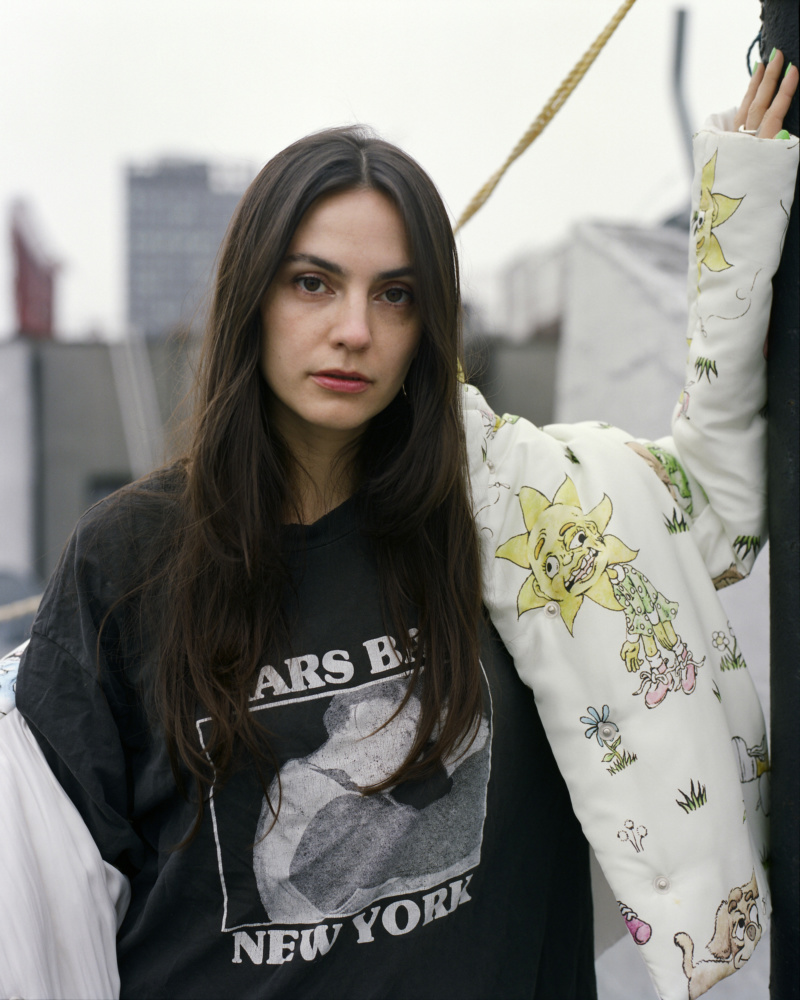 The ethos of quotation, which grounds the kernel of Angels, rises to the frothy, crashing surface of Chicklette. “Mark, my bandmate, also has a solo project, but if you add his solo project to Chicklette, it doesn’t equal Angels. You can parse the sensibilities,” she says, laughing. “Mine is much more rough around the edges. I take a lot more license in Chicklette in collaging things, taking samples as the base of everything, writing lyrics that are patched together from other lyrics.” In her DJ work for fashion lines Gauntlett Cheng and Lou Dallas, whatever ‘original’ material was there is completely stripped away, and a new kind of purity is proposed, one of repetition and recontextualization. Her mix for the Gauntlett Cheng Fall/Winter ’19 show of was mostly a re-working of Dido’s 2003 single “White Flag,” an anthem of millennial, mass-produced angst. Dido is the opposite of contemporary or subcultural, yet she is also both of those things. In other hands, such a choice could have rung ironic, even apathetic. But, on a winter day at St. Marks Church-on-the-Bowery, as models walked in soil colors and iridescent deadstock, the rising tide of Chicklette’s “White Flag” brought attendants to tears.

“It’s so unexpected to hear this in that space, in this moment; it transforms what the thing is, and the experience of that is uncanny,” Padgett offers. “I like digging through the trash. I love that things like that are obvious and also not obvious in the effect they’re going to have on you.” Walking home from our conversation, listening to Dido singing “I’m in love, and always will be,” I remember that Roland Barthes said that every “I love you” is always a quotation. Or something like that. I couldn’t cite it, but I know I read it somewhere, and it sounds like him. By the time I get home, thinking of angels, I realize every quotation is also always an “I love you.”