With abstract artists, it’s hard to talk about why one painter is more interesting than the next without getting deep in the weeds. Suffice it to say that some blobs and bloops are arranged in a way that energize and engage the mind more powerfully than others. Eddie Martinez makes good blobs. He’s been the subject of chatter from the lips of collectors and curators for a while now, garnering a solo show at the Drawing Center that ended last February, as well as well-received presentations at art fairs and galleries. Now he has an exhibition on view at the Bronx Museum of the Arts, “Eddie Martinez: White Outs,” through February 17. Imagine that some drippy, exuberant works were painted, but then large portions of them were covered with Liquid Paper, and you get the idea.

Without a doubt, Martinez’s work evokes mid-20th century abstraction, but it also recalls street art, and it’s not too surprising to learn that he did some graffiti back in the day. “People always say Guston, de Kooning, Basquiat,” says Martinez, 41, seated on an electric green couch in his Bushwick studio. “I don’t know how to respond anymore.” He said that if stuck in an elevator with someone’s mother, he would describe his style as “messy explosions of Picassos.” 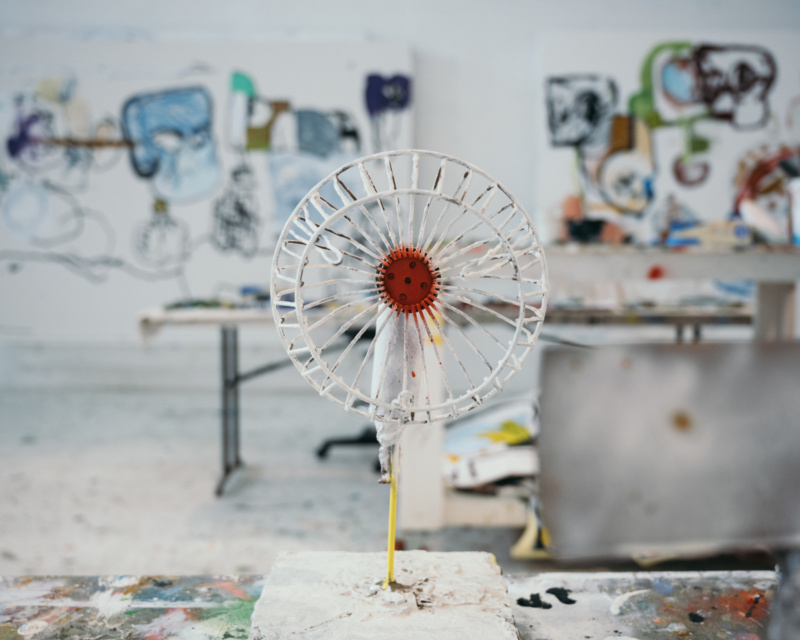 Like a lot of painters, he considers drawing to be the foundation of his work. “Drawing is a constant,” he says. “I’m surprised I’m not drawing right now. That’s what I do to unpack life as it’s happening.” Figurative elements drift in and out of his compositions—more so lately, he says—especially heads.

Martinez draws for its own sake, but it does help inform the rest of his practice. As he puts it, “I don’t make a drawing for a painting. But at the same time, I make a drawing and then say, ‘I want this to be a silkscreen.’” He also uses palette knives, brushes, crayons and spray cans—he’s truly omnivorous when it comes to getting paint onto canvas. His work in sculpture exhibits the same quality, with found objects enlivening the mix.

“I like when you can have a super transparent thing next to a highly impasto shape,” Martinez says of his paintings. “That also kind of gives you an idea of the history, even though you won’t necessarily know when each one was done.” 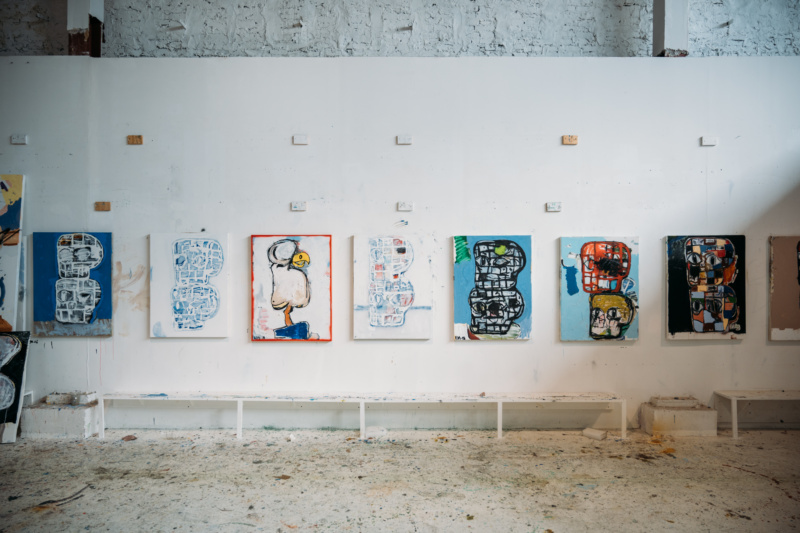 His own history has a couple of twists and turns. His grandfather was Puerto Rican, but “I’m embarrassed because I have a Latino last name and don’t speak Spanish,” he says, laughing. He spent his earliest years in Brooklyn, but grew up all over the country, in states that include Florida, Massachusetts, Texas and California. He did one year of art school at the Art Institute of Boston, but he found he couldn’t finish. He needed structure in his life, but “it just wasn’t going to happen,” he admits now. “It was only about 10 years ago that I stopped feeling bad about that. “In the end, it all worked out.”

Martinez’s distinctive color sense—primary tones that are interrupted and shaped by black and white and some in-between hues—also follows his gut, and so far, so good. “It’s completely instinctual,” he says. “I don’t know color theory, and I’m not concerned if I’m doing it right or if I’m doing it wrong. It’s just the way I do it.”