Artist Lina Iris Viktor Navigates the Entangled History of Liberia and the U.S.

I feel like there are people who can look at the work—be they black or white, it doesn’t matter—who will take something powerful away from it, because it’s about the human experience,” says Lina Iris Viktor as we discuss her solo exhibition at the New Orleans Museum of Art, which opens October 5. Beautiful references to Malick Sidibé, Chris Ofili and David Hockney are plastered on one wall of her whitebox studio, located in the heart of New York’s Financial District. On the other side of the space is a robust library brimming with monographs of figures including Samuel Fosso, Yayoi Kusama, Keith Haring and Alexander McQueen. While we chat, her young studio manager diligently works on production in the corner. It’s a humid July afternoon and I’m visually drinking in works-in- progress that will appear in the show, “Lina Iris Viktor: A Haven. A Hell. A Dream Deferred.” The exhibition’s title aptly addresses the fraught and convoluted historical trajectory of Liberia, Africa’s first republic.

In 1822, Liberia began as a settlement founded by the American Colonization Society (ACS), a group of mostly Northeastern abolitionists who believed free Blacks and manumitted slaves would live prosperously by being repatriated back to Africa. More than 13,000 freeborn and formerly enslaved Blacks (including 3,200 Afro-Caribbeans) immigrated to Liberia throughout the next four decades, which ultimately led to conflicts lasting nearly two centuries as the settlement transitioned into an independent country. In the first few years thousands of émigrés succumbed to disease. Over time their American elitist ideals clashed with the native tribes and their descendants. The Americo-Liberians controlled the government, leaving the indigenous tribes with little to zero representation. “The reason why it’s such a fraught history is because it’s couched as altruistic, and it wasn’t altruistic. It was fear-based: ‘We don’t want rebellion from progeny or mixed-race kids of former slave owners who are well-educated and now free.’ It hit a boiling point,” Viktor explains. “Liberia was founded on this kind of dualistic idea,” she continues. “It’s like, Let’s take them back to the continent so we don’t have this potential rebellion on our hands, but it was also a missionary thing: Let’s bring Christianity to these uncivilized individuals on the west coast of Africa.”

Viktor is producing 11 works for the exhibition—some on canvas, some on paper—utilizing primary source materials such as 19th-century tribal maps of the west coast of Africa (used by the ACS during the formation of Liberia). She also depicts regional hairstyles, traditional and contemporary textiles, West African portrait studio photography and Viktor herself as a Libyan Sibyl. “Viktor brilliantly reframes the myths of the founding of Liberia, a free nation created by the oppressors for the oppressed. She embodies a postmodern Sibyl who prophesies a disruption and a possible return to the origins,” explains gallerist Mariane Ibrahim, who has represented Viktor since 2017.

When I visit Viktor’s studio, I see two canvases in various stages, each on its own work table, as several more lay in the other half of her studio. In the works, Viktor portrays Sibyl, a divine priestess, who takes center stage. In one, she is draped in a queenly crimson red and navy blue floral textile dress; in the foreground, a map of the Liberian Hinterlands from the early 20th century outlines indigenous kingdoms like the Mende, Gbande, Bassa and Kru. In the other portrait of the Sibyl, Viktor’s blue hair is styled in two large buns, her back is turned to the viewer and she is facing an ornate floral pattern featuring her signature 24-karat gold leaf. The textiles, hairstyles and portrait poses are not specific to distinct tribal communities, but are rich in cross-references, “When I’m looking at textiles and hairstyles, it’s more a survey of a whole region than a survey of a particular locale. It’s more of an idea of a West African narrative than just a Liberian narrative.” 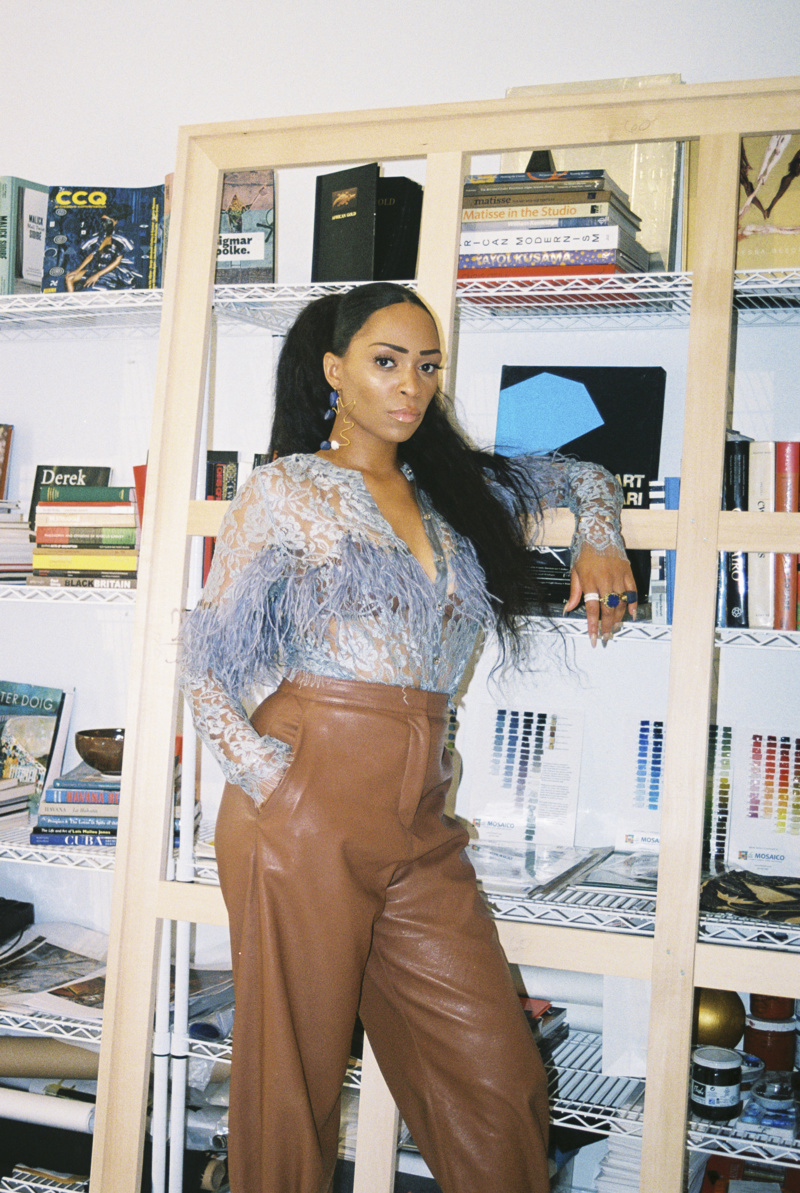 Viktor’s NOMA debut occurs during New Orleans’s historic tricentennial. In homage, a selection of the prestigious Orléans Collection— named, like the city, for the Duke of Orléans and counting Old Masters such as Rubens, Veronese and Rembrandt within its holdings— is also on view at the museum. “I was thinking about what it would mean to have classical portraits in visual conversation. It is significant that the series should debut in the U.S. South, as the history of Liberia is intimately entangled with that of antebellum America,” says exhibition curator Allison Young. “It represents one chapter within this country’s own struggle to reconcile the moral and philosophical contradictions of its early years.”

During Viktor’s research, in linking Liberia to New Orleans, she encountered an enigmatic and controversial figure of New Orleanian history: the wealthy slave-owning John McDonogh, who is widely known across Louisiana as the benefactor of the public education system in New Orleans with schools named after him and a monument to his memory in Lafayette Square. McDonogh was behind a shrewd manumission scheme, where slaves could buy their freedom in 15 years time—during which McDonogh would continue to profit from their labor. As a chief member of ACS, McDonogh was key to the organization and many of his former slaves were among the first wave of immigrants to populate Liberia. 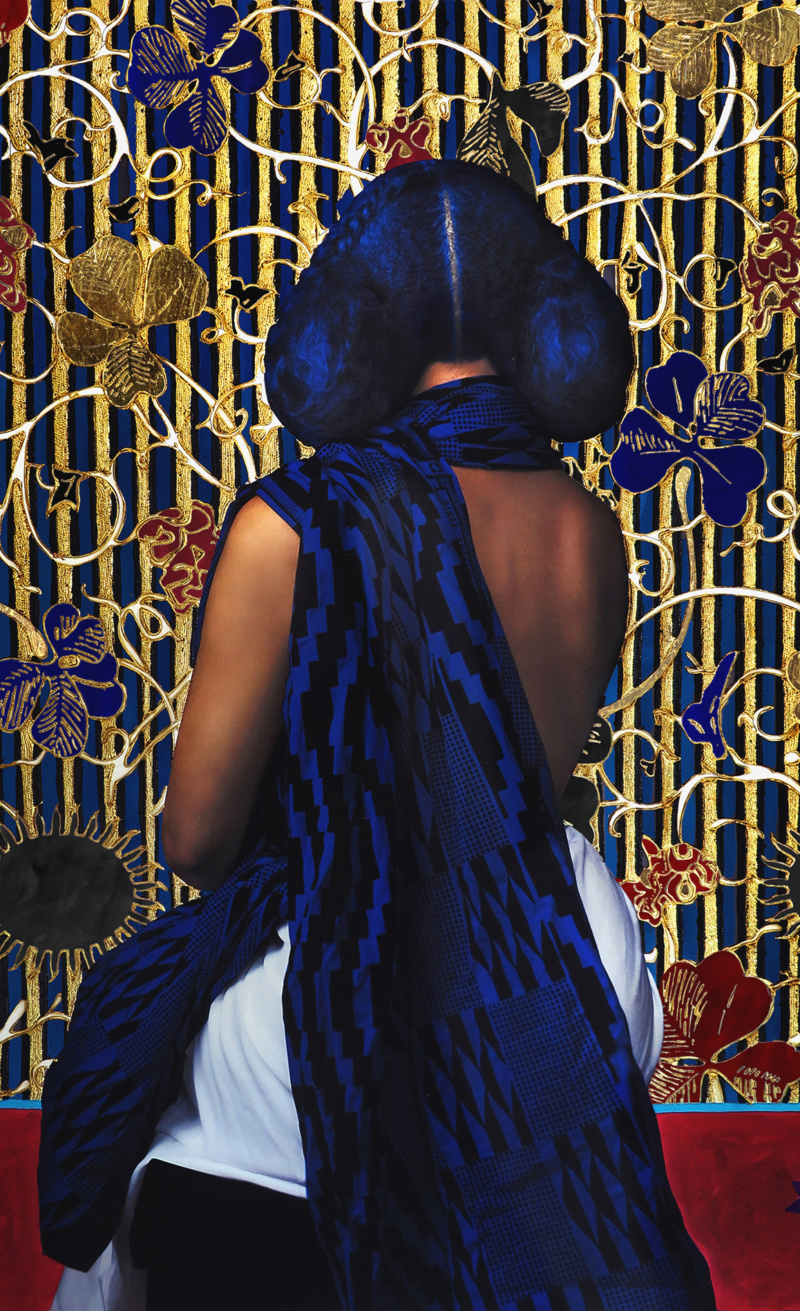 Living and working in New York and London, Viktor is a British-Liberian artist born in the U.S. in the 1980s. But, she says, “the fact that I am Liberian or that both of my parents are Liberian wasn’t the real driver. I’m not driven by an emotional inspiration. I’m not trying to find my roots. There is no feeling of displacement, or any of these things. It’s just about a really interesting narrative.” She continues, “it’s an interesting study of the pathology of these imperialists that feel they can go somewhere, wipe a slate clean and impart their ideas on other people’s land and space without any repercussions.” Viktor is well aware of the powerful lineage and remarkable history that has come out of the African diaspora, but she is clearly more interested in what is ahead. “I have a very future-focused, not necessarily Afrofuturist viewpoint. We know where we have existed, but where would I like to see us exist? If we don’t formulate those ideas, someone else will formulate them for us.”