Down the Rabbit Hole with Alicja Kwade

Alicja Kwade is a sculptor. But more significantly she is a skeptic. Her work challenges widely held principles such as the way we measure time, distance, size; value; our own physical materiality; gravity. “I’m not a believer,” she tells me, sitting in the lobby of the Inn at Castle Hill in Ipswich, Massachusetts. “I don’t believe in what I see or what people tell me.”

Kwade was in Massachusetts for the opening of TunnelTeller, an installation on the grounds of Castle Hill on the Crane Estate as part of Art & The Landscape, a relatively new outdoor public art program initiated by the conservation and preservation organization The Trustees of Reservations. Her skepticism was in high relief that day, as the setting was well, pretty unbelievable.

Purchased in 1910 as a summer residence by the Chicago industrialist and plumbing magnate Richard Teller Crane, Jr. and donated by the family to The Trustees in 1949, the now 2,100-acre estate includes a 59-room Stuart-style mansion, an Italian garden and a half-mile long swath of impossibly green lawn that undulates roller coaster-like down to the sea. “This nature is so intense—and also this is not real,” Kwade says, gesturing to the storybook house looming above us.

Installed where a hedge maze used to sit, just beyond the terrace of the great house, TunnelTeller is a maze in its own right. Fabricated from smooth concrete, it is punctuated with gleaming stainless steel-lined apertures of various sizes that frame and distort your view— and ultimately your perception—of the surrounding landscape. Spheres cut from macaubas, a Brazilian quartzite, are strewn about like marbles left by a very large and careless child. “It’s very against logic that a stone has the color of the sky,” Kwade observes.

Still to be installed are a handful of steel tubes which will further circumscribe the views through the holes in the maze’s walls. The shipping container bringing the tubes from Germany had been lost at sea and only recovered days before—not in time for the opening. But Kwade seems to be taking it all in stride. She may be extremely precise when it comes to her work, but she does not come across as being at all precious about it. “It will be better in a few weeks,” she comments on the installation thus far, which already shows signs that its first curious visitors have been a family of raccoons. “It looks a bit too new.”

“Alicja’s work packs a wallop,” says Pedro Alonzo, the Boston-based independent curator who was involved in the installation. “She pushes materials to the limit, working with engineers to the edge of ‘you can’t do that’ and challenging the systems we have created for ourselves in our feeble attempts to understand reality.”

I first encountered Kwade’s work in 2013 during Berlin Gallery Weekend. Her piece Nach Osten was installed in the nave of St. Agnes, a massive brutalist church which had just been acquired by the gallerist Johann König. Inspired by Foucault’s pendulum, Nach Osten consisted of a bare light bulb, strung nearly 15 meters from the ceiling above, that swung through the otherwise pitch-dark space with an audible whoosh, at an axis calibrated against the earth’s eastern rotation. Even without any knowledge of the science behind it—or, for that matter, of the artist who made it—the piece struck me as elegant and quietly profound. The most effective artworks will generously give you that experience without demanding in return that you fully understand where the artist is coming from. 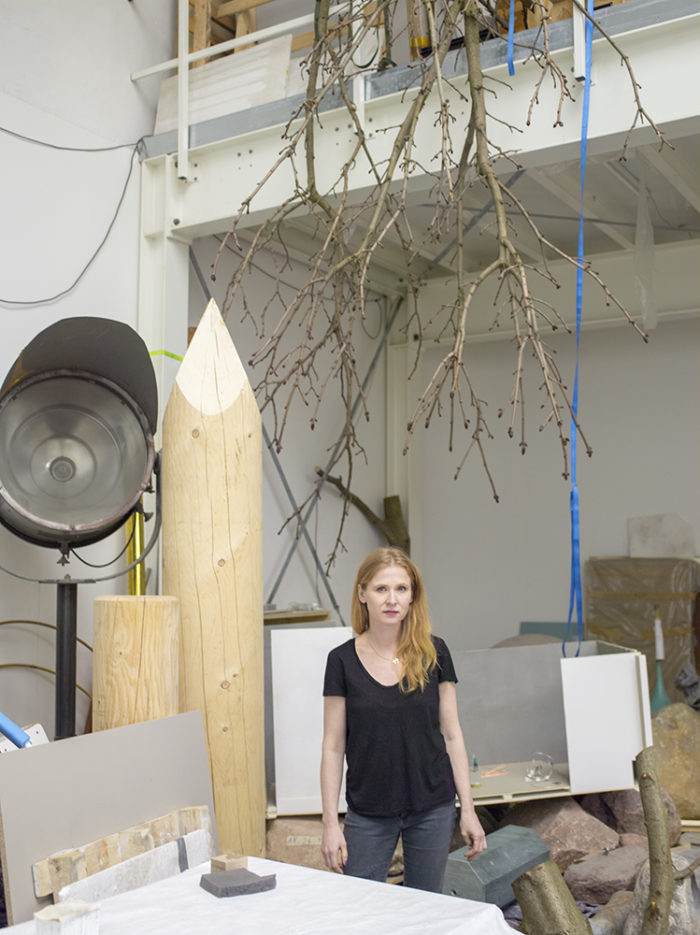 “I don’t need people to completely understand,” Kwade insists. “From the moment I release the work from my studio, I’m not there to tell people what to think. It should do something. It should touch you in some way. If it’s just pure beauty, that’s okay. I know people struggle with that, but I don’t. I’m creating a physical thing in space and that has to work on its own, without me. I expect that from art actually.”

Alonzo admires the way Kwade is not afraid to take on humanity’s big conventions—absurd conventions that we have agreed to as a species and developed in order to understand and control natural phenomena. “There is no control,” he says. “I think with Newton we felt we had control. Newton made us feel like, okay, this is the way it works. Then Einstein came along, and nothing made sense again.”

Kwade is Polish, the daughter of a cultural scientist and an art historian and conservator. Her father, she has said, did not read her fairytales at bedtime, but instead encouraged her to fall asleep with thoughts in her head of the endlessness of space. At age 19, Kwade moved to Berlin to study fine arts at the Universität der Künste and ended up staying. (The portrait wastaken in her studio in the Weissensee, a neighborhood in the northeast of Berlin). Though in her case, the idea of a home base is also an increasingly relative one. Before arriving in Ipswich Kwade had been in Rome, and she is currently working on projects in Denmark, Finland, the Netherlands, Spain and Russia, as well as one in nearby Boston. But it would seem that the resulting sense of dislocation is only fueling her work.

One of the concepts Kwade has been thinking about lately is the way that language shapes thought. “How we define matter and what language is doing to that—that is kind of interesting,” she says. “Even Karl Marx wrote about that, so you can see it from lots of points of view.” She is fascinated by the idea that something cannot exist unless we have a word for it. This applies to abstract things like feelings, as well as to physical objects, like the sofa we are sitting on in front of the fireplace. “It’s kind of a crazy thought. You need a definition of things. And actually I experienced that when I was a kid,” she tells me. “My parents moved from Poland to Germany when I was eight years old, and I had been sent to this summer camp. All the kids were crying and saying they have heimweh, which means homesickness. This term doesn’t exist in the Polish language. You can say I miss my mom, or I would like to get back to my school, but there is no term for homesick. So I wasn’t getting it. My German was not yet very good. I thought they had something wrong with their legs,” she recalls with a laugh, explaining that the German word for leg is bein. “I thought they all had a leg disease.”

Kwade seems to have found her sweet spot in that zone of uncertainty, and through increasingly public outdoor projects, is eager to encourage others—art enthusiasts, families on picnics, and raccoons alike—to join her there and hopefully ask the same questions she is asking herself. “I’m very interested in the emptiness—the fact that 99.9 percent of matter is just emptiness,” she says. “That is just crazy when you think about it. It’s something I’m trying to work myself through.”