Jeffrey Gibson Breaks the Rules at the Denver Art Museum

A strong Native-American conversation in the art world is something that is still very new these days. But it’s growing. The Jimmie Durham show at the Whitney Museum of American Art, which ended this winter, was one powerful example. And the next link in the chain is “Jeffrey Gibson: Like a Hammer” at the Denver Art Museum (May 13 to August 12), which travels to the Seattle Art Museum next year.

“I was talking to another Native artist recently and he said to me, ‘Oh yeah, people are paying attention to us,’” says the chatty and engaging Gibson, who lives in New York’s Hudson Valley. “Something’s going on.”

Whether it will last as a global phenomenon remains to be seen. But the individual case of Gibson, who’s 45, is instructive: He has been working steadily for more than 20 years, and now he finds himself stepping out of the art world’s peripheral vision and into the spotlight with a spate of exhibitions and projects, including a show at the Ruth and Elmer Wellin Museum of Art at Hamilton College in upstate New York this fall.

A happy vibe pervades Gibson’s huge studio, located in a former grade school in a small town. Different rooms are designated for different activities and in the large gym, house music is playing. Late on a Friday, Gibson is painting away on a canvas featuring a dense grid of triangular reds in slightly different hues. Nearby, his assistants, more of them women than men today, are at work creating colorful garments, and some of them are dancing to the beat while they do it. 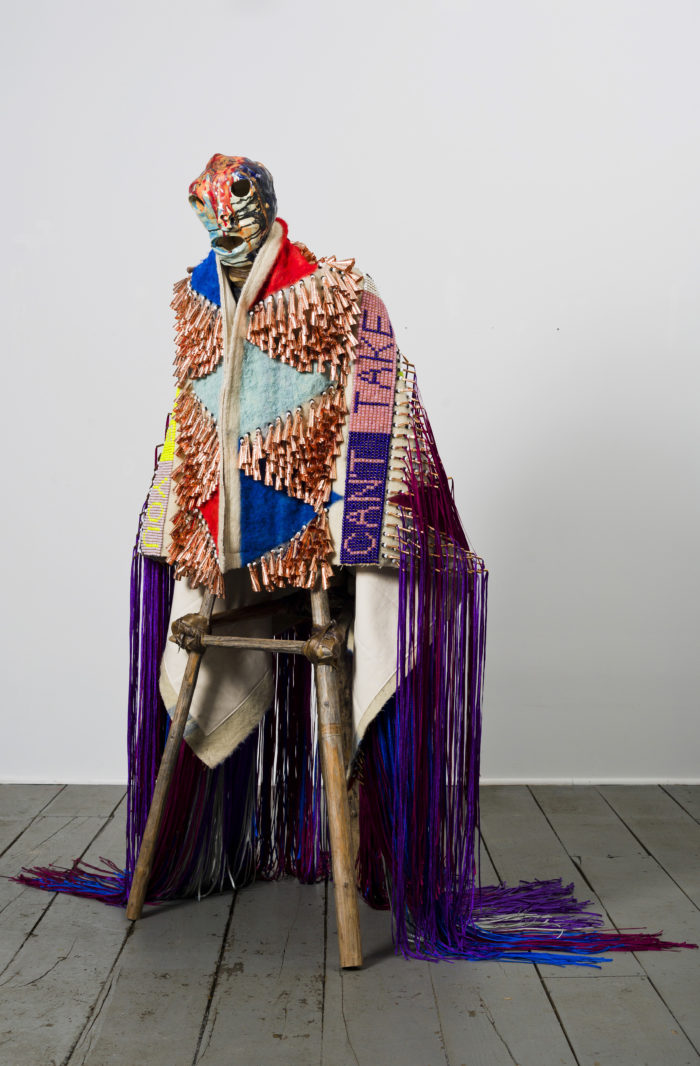 The upbeat energy shouldn’t fool anyone about Gibson’s seriousness of purpose, though. If you ask him his artistic goal, he has it ready: “It’s representation. Someone finally made me say it the other day. Until I see clear representation within popular culture of indigenous people and aesthetics, then my pursuit is not done, you know? It’s that simple.”

How he achieves that end is fascinating. Gibson blends a classic contemporary art bio—studies at the Art Institute of Chicago and the Royal College of Art, current representation by the New York gallery Sikkema Jenkins & Co.—with a deep understanding of indigenous craft traditions. Gibson is a registered Mississippi Band Choctaw, his father’s tribe; his mother is Cherokee.

“It’s always been about using my personal narrative to complicate the popular notions of being queer, being gay, being Native American—any of these singular adjectives,” says Gibson.

In the Denver show, two delicately beaded punching bags balancing each other like the scales of justice comprise Our Freedom Is Worth More Than Our Pain (2017). In the painting All Things Big and Small (2016), small triangles of purple, red and blue create a beguiling pattern. Several small, doll-like sculptures incorporate beading, colorful fabrics and evocative materials like goat fur and deer hide. “I embrace the handcrafted,” says Gibson, which explains part of the need for assistants at his studio.

So that he’s not plundering the traditions he admires, Gibson has strict rules. “I would never address anything to do with ceremony,” he says. “I wasn’t raised in a ceremonial lifestyle. I would never incorporate someone else’s story without their permission. I would never steal someone’s design. I would never copy anyone’s beadwork or quillwork.”

That level of respect, and ability to turn it into something, came out of a fascinating personal journey. With a father that worked as a civil engineer for the U.S. Department of Defense, Gibson lived in different parts of Germany, Korea and the East Coast. After years of attending art schools in Chicago and London, he started his career as a professional artist. But despite having some success over the next 15 years, he was feeling stuck.

“I left every situation feeling frustrated,” Gibson says now. “I had to talk to people as if I was a cultural interpreter. There was no freedom for me to do what I wanted to do.” By 2009, he adds, “I was on the cusp of walking away from being an artist.”

Luckily, a series of grants provided him the chance to take time to reboot. He used it for a cultural walkabout of sorts—a classic discovery quest. Gibson appears to have had an ongoing internal monologue: “I was like, ‘Jeff, you know people. You can just call them up. You can talk to dancers, drummers, whatever you want to do.’ So, that’s what I did. And I went to Winnipeg. I went to Pine Ridge. I went to Oregon. I went to Oklahoma. And I met with people who make things. It just opened up everything.”

Perhaps paradoxically, steeping himself more intensely in the work of indigenous makers seems to have also freed Gibson to come into his own, beholden to no one. The work included in the Denver show were produced after 2011.

“There was a big shift in my work. I had stopped painting on canvas, and I started working on more obvious Native-American materials— rawhide, beads, primarily wool—and that’s where the exhibition starts,” he says. Gibson still thinks of himself as a painter, one who often suffers from obsessive “painter’s brain,” which you can detect in the repetition of shapes and the subtle color gradations in his work.

The feedback he got for a 2012 show at the nonprofit New York art space Participant Inc. was a game changer. “It was like the first time people said, ‘I totally get it. I’m interested in this,’” Gibson says. “It was a revelation.”

He has been able to hit his stride partly by staying removed from the competition and gossip of the art world. “New York City was not good for me,” says Gibson, who is married to an artist and loves the small-town lifestyle. The change of scenery helped further unleash something for him.

“Choctaw people are incredibly pragmatic, with absolute independence and determination,” he says. “There’s a real acceptance of the circumstances of the world. You’re not a victim. You take care of yourself and you do what you need to do.”

The Denver show and his other projects serve not only Gibson’s own personal and artistic flowering but the wider representation he so pointedly demands—and the two together form a virtuous circle, feeding off of each other. “We’re going from zero to one,” he says of Native-American visibility. “But that one allows me to step further away from being a cultural interpreter and just step more into invention, you know?”