On a gray afternoon in Brooklyn, three large paintings in Chris Martin’s East Williamsburg studio seemed illuminated from within. All were dominated by fields of colorful glitter. The material has become one of Martin’s calling cards over the past decade, as he has risen from relative obscurity to blue-chip status. For Martin, however, his use of glitter has humbler origins. He discovered the material in the early 1990s while working as an art therapist for HIV-positive patients. “They used the glitter until it ran out,” he says, “as well as gold and silver paint.”

Martin was preparing for a show of new works this spring at Anton Kern Gallery, splitting his time between his studios in Brooklyn and the Catskill Mountains. According to Kern’s senior director, Christoph Gerozissis, the glitter in Martin’s paintings has a historical depth that people tend to overlook. The material has a link to “American syncretic culture that came from Africa, where reflections have to do with the possibility of communicating with the spirit world,” Gerozissis says. Martin is quick to divulge his paintings’ wide array of references, from spiritual traditions to magic mushrooms to global art history.

Martin points to the towering canvas Blonde on Blonde, named after the Bob Dylan album, as an “elegiac” painting. On a field of blue glitter and yellow painted stripes, he had drawn galaxy-like spirals with his finger and collaged various images (among them the Dylan album cover, a lottery ticket and a photograph of JTS Brown Bourbon—his late mother’s favorite spirit). 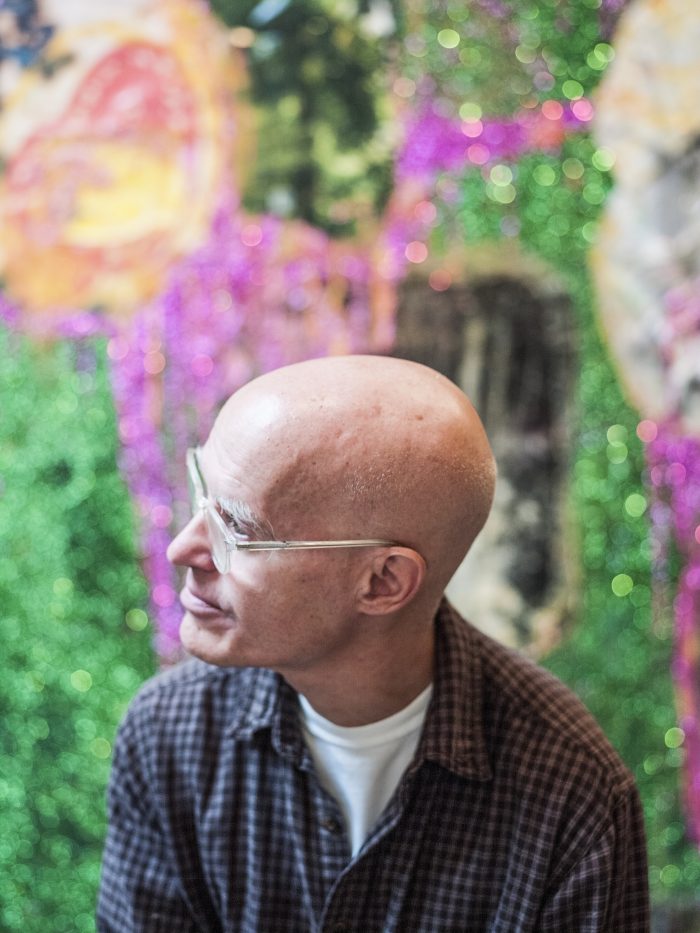 The feeling of Martin’s paintings is controlled anarchy, which mirrors his artistic development. After dropping out of Yale’s painting department in the mid-1970s, Martin moved to lower Manhattan. He soaked up the punk energy of the city, living a few blocks from the infamous club CBGB. In 1980 he decamped to Williamsburg, where he shared a studio before moving to his current building at the neighborhood’s eastern edge. He recalls how deserted Brooklyn was at the time. One day on the street, he was astonished to meet his friend Joyce Pensato with “this wonderful older lady with a full-length fur coat.” The elegant woman was the Abstract Expressionist painter Joan Mitchell. “I remember thinking, God, what the hell is Joan Mitchell doing out here?” Martin laughs.

He describes his career as a slow burn, in part because of the prevailing attitudes about art when he moved to New York. In the 1970s, painters “had a signature and they stuck with it. And I tried to do that, but I suffered a lot because I’m not that kind of an artist.” He experimented with performance, painting live in galleries and in subway tunnels. Today, he is “very conscious that there is a performance about putting paint on the canvas.”

Gerozissis believes there is a link between Martin’s performative process and his interest in collage. Both are ways to “bring in the world.” When Martin was preparing paintings for an exhibition in Brooklyn a few years ago, he discovered they were too big for his studio. He rolled out his canvases on the roof, cut a space out for the chimney, and painted around it. “That shows a certain attitude and embracing of the world that is very uniquely his view,” Gerozissis says. 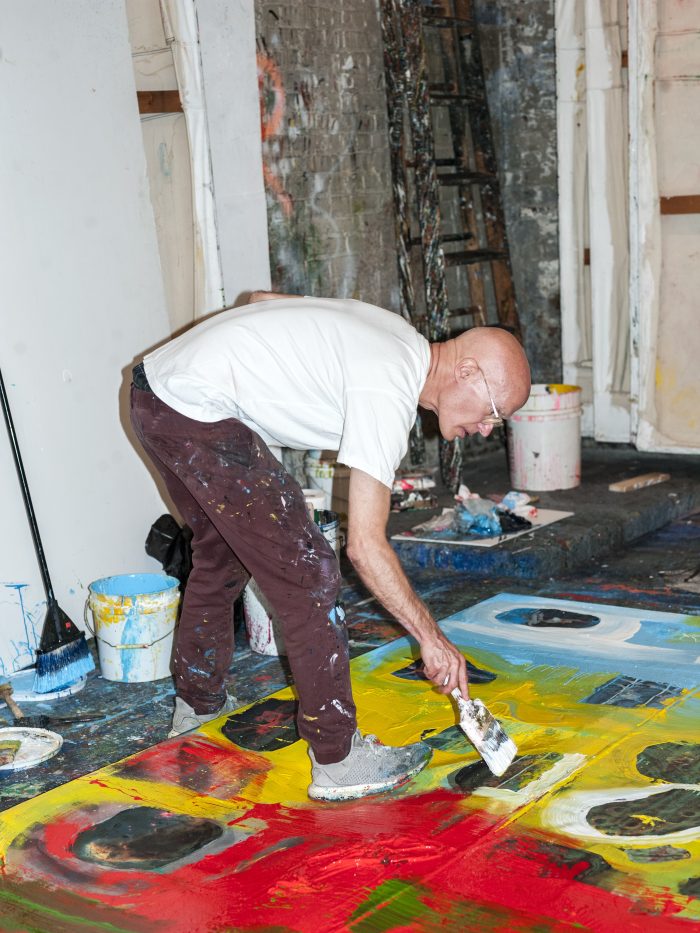 “One of my earliest teachers, since I came to New York, was Joseph Beuys,” Martin says. He was profoundly moved by seeing the German artist’s retrospective at the Guggenheim in the early 1980s. “The idea that art could have a healing function, first for the artist and then for the society—that’s something that I always understood.” Martin brought that philosophy to bear when he worked as an art therapist, helping his HIV patients—and himself—cope with loss. He describes his art “as a way for me to survive my own life and to make sense of the world and emotions.”

Though he can wax nostalgic about old New York, Martin enthusiastically supports emerging artists. Gerozissis calls him “the godfather of every Brooklyn painter,” and he regularly participates in small, artist-organized shows. About 10 years ago, Martin became friendly with the artists running the Lower East Side gallery Canada. The group—who were 20 years Martin’s junior—included Brian Belott, Katherine Bernhardt and Joe Bradley. “I found that I had a lot to talk about with them,” Martin says. “Somehow we had arrived at the same place from opposite directions. They were very ambitious, serious artists, but they had a great sense of humor and a good sense of the fucked-up-ness of what was possible.” As Martin’s career shows, those lessons are timeless.