A jumble of contradictions bound up together under an old-fashioned European workers cap, Anselm Kiefer is at Gagosian in Chelsea, looking at his new exhibition.

“Each artist, if he is good, is an iconoclast,” says Kiefer, who tosses out such philosophical pearls easily—and he certainly qualifies as someone who has challenged authority and traditions from the beginning.

“Transition from Cool to Warm,” on view at the 21st Street space until July 14, includes 43 watercolors and nine paintings, most of them from the last few years, and a roomful of his painted books, each opened to a beautiful image inside.

“I’ve always done watercolor, but it can be years between them,” says Kiefer, 72, who notes that Larry Gagosian himself visited the artist in Croissy Beaubourg, on the outskirts of Paris, and was impressed enough to urge an exhibition of them.

“In school you learn about colors: There are cool ones and warm ones,” Kiefer says, before adding, perhaps superfluously, “I use the phrase ironically.”

You certainly won’t see the show’s new pieces at Art Basel. “I forbid my galleries from showing my work at art fairs, I have from the beginning,” says Kiefer, full of such strong opinions. “It’s an atmosphere that is completely anti-cultural.” 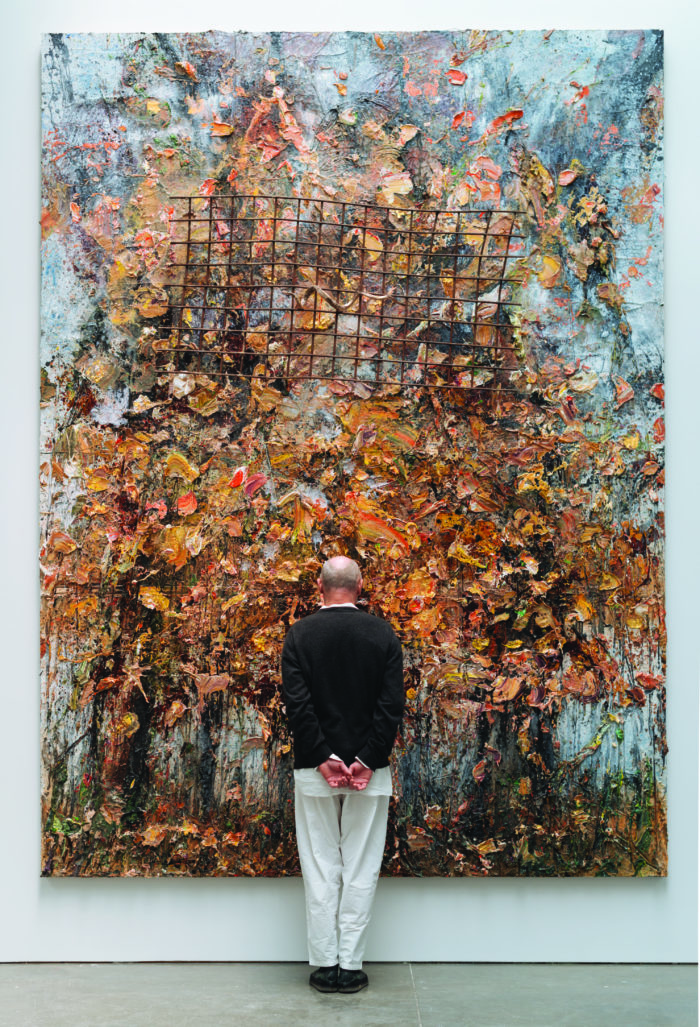 The cool-warm dichotomy is the most superficial example of how this artist seems to be entirely animated by opposing forces. The famously muddy tones of his heavily encrusted paintings don’t register without a tiny bit of orange somewhere to contrast, and the work in this show employ that trick to great effect, as in Ignis sacer (2016).

And the supple, brilliantly handled watercolors on display contain a profusion of color compared to his most famous mode, but they are all anchored somewhere by black, to bring the picture earthward.

Kiefer’s clouds have a lining alright, but it’s not silver—shades of gray predominate.

“I feel guilty if something is too beautiful,” he says. “Then I think, it’s—what’s the word in English? Affirmativ in German. And I don’t want to be that. The world is what it is. Then I think I have to do them even more beautiful, that it’s so beautiful... it’s ugly again.”

History, myth and religion—the core Kiefer subjects from the beginning—have plenty of loaded, fraught scenes for him to conjure. Born in 1945, Kiefer, like all post-War German artists, has had to grapple with the Holocaust and European violence generally.

“The house of my parents was bombed the night I was born—fortunately they were at the hospital,” Kiefer says, chuckling at both the darkness and luck of the circumstances. He grew up amidst literal ashes, but notes that it’s all a matter of perspective, especially in the mind of a child.

“I had no things to play with, so I played with bricks, from these wonderful houses,” he says. “For a kid, it’s not destruction. A kid doesn’t ask. They are just bricks.” Building blocks are where you find them.

The first series that got him attention was Occupations, a series of self-portraits in which he gave the Nazi salute at various European locations. Painting was always his core medium, however, and he was greatly inspired by Joseph Beuys, whom he would travel to see in Dusseldorf. In particular, Kiefer recalls that Beuys was approving of his Occupations series for its “good action, and for Beuys action was art.” From the start, Kiefer was experimenting with enhancing paint with strange materials like straw, building up the canvas as if it were a sculpture.

His homeland has never particularly appreciated him, which may explain his move to France in the early ‘90s. “I made my career here,” Kiefer says of the U.S. “In Germany, still today, they don’t like me. They’ve written the same things for 40 years: ‘It’s too big, too heavy.’ And they don’t look.” Although he’s had huge success, and is easily ranked among the most significant living painters, you can tell this still rankles.

Even from his French perch, “Mostly I paint subjects from Germany,” Kiefer says, savoring yet another irony. “You feel more German when you’re in another country. You see what you are from the outside.”

Kiefer works constantly. He quotes Rodin: “It faut toujours travailler.” Photography, though rarely exhibited, takes up a lot of his creative time in the gesamtkunstwerk village he has created for himself in Barjac, a series of post-industrial buildings (on the site of a former silk factory) spreading over many acres that allows him to store works, do full-scale mockups of exhibitions and generally play around. It’s not at all a stretch to link this back to the found bricks of his youth.

“Artists and poets are nourished when they are kids,” he says. “You should not get old—you should keep childish.” He smiles at this. He adds, “I want to be surprised. It’s the reason I work.”

So is he warm or cool as a person? “I’m both,” he says. “I can be very warm, but I when I am deciding for a painting I can be cold and very rational. You have to be able to decide. And you kill 100 other paintings in the process. You can’t be nostalgic.”

Kiefer was born into a Catholic family. “You destroy, and then you resurrect,” he says of art-making. And he talks openly of the idea of original sin. Having that as the sobering baseline for humanity also puts into stark relief moments like the one in the watercolor Garlands, 2016, one of Kiefer’s periodic images of women in ecstasy. 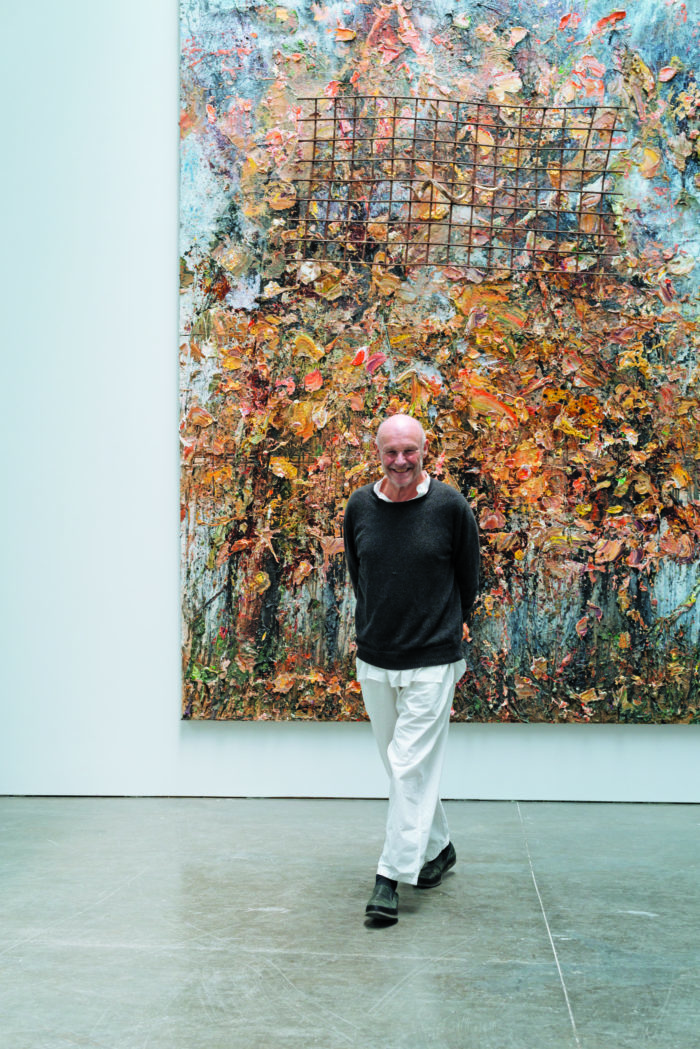 “It’s the fact that we are not complete,” he says. “We are human beings, and so something is wrong with us. We long for something more clear, more wise—better.”

His own longing for perfection keeps him endlessly tinkering. “Painting for me is never finished,” he says. “I keep them around until they say something to me.” Watercolor is a relief in some ways for him because of its finality: “You have to go, and you cannot correct it.”

Kiefer walks around to the very end of the show, where two huge paintings from 2017 hang opposite each other: Schlange (Snake) and Emanation. There’s a metal snake attached to the first work, with its clear Garden of Eden reference, under which is a depiction of autumnal color that Kiefer witnessed in London.

Emanation features lead that was poured onto a painted canvas lying on the floor. Once the lead has set, it is peeled off the canvas, taking large areas of paint and other detritus with it. The result, he says, reminds him of St. Barthelemy, the Apostle who was flayed. “I take the lead away, and it’s like peeling off the skin,” he says.

Kiefer admits that a part of him doesn’t want paintings to sell (probably not what Gagosian wants to hear). Because if they don’t find a home, he can take them back to the studio and tinker some more.

For someone known as a dark, brooding painter struggling with questions of the soul, it’s his version of a hopeful note. There’s just the barest intimation of a smile when he adds, “I see always possibilities.”