A Matter of Perspective: The Paulin-Ferrell Collection

“Let’s start the bidding at $100, shall we?” says Will Ferrell, naked on Saturday Night Live. He is performing the role of a model in a life drawing class who, delusional and desperate for money, thinks he can sell himself off to art students. “One hundred, one hundred... ooh, a thousand!” he continues. “Going once, going twice, sold to the gentleman in the front row.”

That was in 1998, when Ferrell was dating Viveca Paulin, who had worked at Bonhams auction house, then Butterfield & Butterfield. Before he got his SNL break, Ferrell worked there, too. “It was Will’s last civilian job,” explains Paulin, a blonde, blue-eyed Swede. “He was typing appraisals off of Dictaphones.” In those days, the couple split their time between New York and Los Angeles. “It was a critical moment in my survival as a struggling actor,” says Ferrell. “But looking back, the fun part was watching statuesque, amazing Viveca turn heads as an auctioneer. That was a blast!”

Married since 2000, Paulin-Ferrell is now the mother of their three boys, a philanthropist who sits on the boards of the Los Angeles County Museum of Art and the Hammer Museum, and an auctioneer at Los Angeles Modern Auctions. “Viveca is mesmerizing. She has a beautiful tempo,” says California collector Chara Schreyer, who recently bought a Ruth Asawa sculpture for $1.4 million at Modern Auctions. “You wonder whether you want the piece at the higher price or are just enjoying the music of her auction style.”

Paulin-Ferrell studied art history and, despite a few forays into acting, has focused her career and spare time on art. A decade ago, she and Ferrell began collecting prints, starting with classics by California masters like Ed Ruscha, Richard Diebenkorn, John Baldessari and Wayne Thiebaud. They then moved into works by a broader range of more avant-garde artists such as Beatriz Milhazes, Julie Mehretu, Mary Kelly and Analia Saban. The couple also commissioned Los Angeles-based photographer Catherine Opie to do portraits of their sons (Magnus, Mattias and Axel), whom they refer to as “the dudes.”

More recently, the pair has been acquiring witty sculptures, such as giant personified matchsticks by Friedrich Kunath and an orange octopus gripping a deep-sea diver by Katharina Fritsch. “Humor is a big part of our lives. It has also allowed us the means to purchase our art,” says Ferrell. Acquiring more droll pieces could be in the cards. Maurizio Cattelan’s miniature elevator, which is installed at LACMA, is a family favorite, as is Ai Weiwei’s Study of Perspective, a photo series in which the artist gives the finger to politically charged monuments around the world. 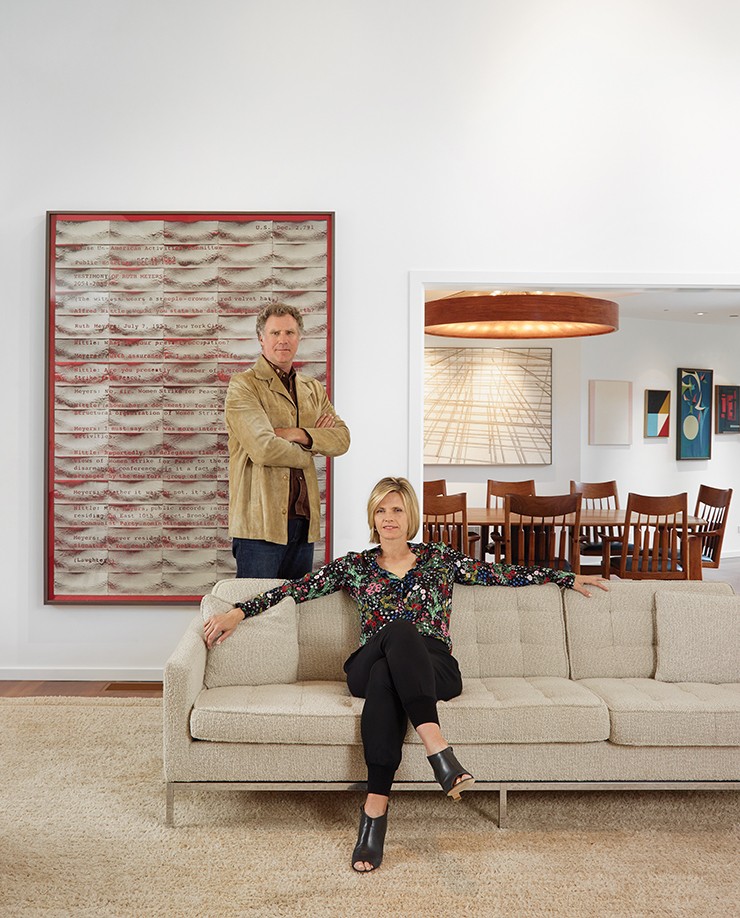 From left: a collection of Jens Quistgaard salt and pepper shakers from the 1950s; Tala Madani’s Up and Down; Pae White’s Popcorn sculptures below Julie Mehretu’s Diffraction lithograph.

“I’m not sure whether our collection fits together or not. We have young and old, emerging and sometimes overlooked people. We’re a bit scattered,” admits Paulin-Ferrell. When she needs an expert sounding board, she confers with people like Ann Philbin, director of the Hammer Museum, and Franklin Sirmans, who was at LACMA and is now director of the Pérez Art Museum Miami. With her background, she has never desired the services of a professional art consultant. “A lot of consultants have an agenda to keep you buying,” she explains. “I’d rather get to know the artists better and have direct relationships with the dealers I like.”

When asked why they collect, Paulin-Ferrell offers a range of reasons but lands ultimately on the importance of supporting artists. “We need them desperately to make sure that we are open-minded and forward-thinking and don’t get stuck,” she says. Ferrell concurs. He relishes art for its extremely varied, sometimes even unsuccessful forms of expression. “I have never walked out of a movie, because I have this empathy for the people who made it,” he admits. “On day one of shooting, they never intended to make a bad movie. So, it’s the same in the art world: When I don’t ‘get’ a piece, I still appreciate the fact that someone took a chance in making it.”

The couple bought their house in the Hollywood Hills from Ellen DeGeneres, the talk show host who makes a hobby of renovating and reselling homes. The two-story, U-shaped structure is spacious without being grand and homey without being quaint. Wall space is at a premium, so Paulin-Ferrell often yearns to rotate works. Her husband, by contrast, likes everything to have its place. “She’ll say we should move this,” says Ferrell. “Then I’ll say, ‘Er…we got to talk about that. I don’t think I can take it.’” In the end, she wins. “I know it’s inevitable,” says Ferrell. “I am gearing up to get better with that stuff.”

While the Hollywood Hills are home to many great art collections, “Hollywood” people are not necessarily their owners. I wonder aloud whether this has to do with the conflicting versions of creativity and value espoused by the art world and the entertainment industry. “It doesn’t make sense that they don’t much talk to each other,” admits Paulin-Ferrell. “Actors and others in the business are always worried about the next paycheck. You never know when they are going to take the tuxedo away. We always have a jokey back-up plan. What’ll we do when the work fizzles out? A dog grooming truck!” 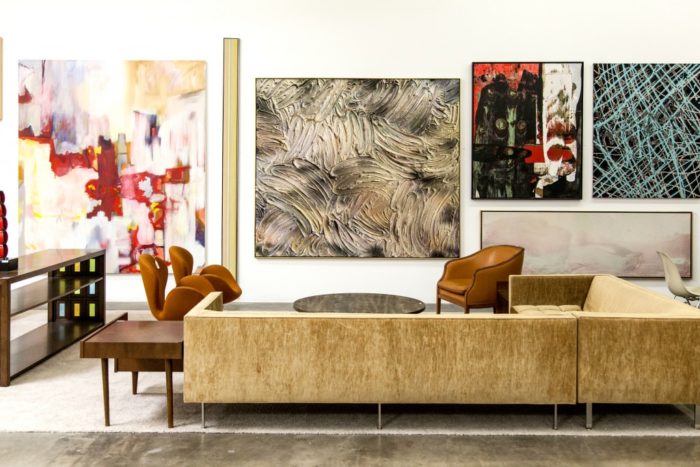 Lots from the recent Modern Art & Design auction at LAMA.

In some ways, the couple sees art as an antidote to the fame industries. One of their major concerns as parents of boys aged 12, nine and six is keeping them grounded. “We’ve always tried to impress upon them how fame doesn’t really mean anything,” explains Paulin-Ferrell. “I’ll say, ‘It’s nice that people recognize your dad because it is a requirement of his very public job, but it doesn’t make him or you better than anyone else.’” As Ferrell sees it, “Art adds to the kids’ appreciation of things that are unusual and unique.” Paulin-Ferrell agrees but is even more proactive. “I want our collecting to impact our kids so they think differently,” she affirms. “About people and about who they want to be as individuals.”