Somewhere between architecture and alchemy, the Italian designer enters a new phase.

Truly great designers are bound to their predecessors by a taut, invisible thread. Vincenzo De Cotiis’s thread connects him to such luminary figures as Carlo Scarpa and Gio Ponti—but also to anonymous craftsmen, like 17th-century Italian plaster artists and Japanese ceramicists. Speaking to his own design education, De Cotiis, who studied architecture at the Politecnico di Milano in the 1970s, readily admits that “belonging to a certain Italian spirit is evident in everything I create.” And indeed, he taps into the irreverent Italian creativity that imbued the design world in the seventies and infuses it with his artisan’s hand, turning it into something seemingly timeless. The resulting work weaves an unexpectedly complex through line between architecture and sculpture, with metal, resin, plaster, glass, stone and all of their material effects coming together according to a logic that seems to lie somewhere deep inside De Cotiis. Because the work is so rooted in its maker’s own sensibilities, it’s also ever-evolving, aware of fads but existing in a universe totally separate from them.

For “Éternel,” an exhibition that will open in May at Carpenters Workshop Gallery in New York, De Cotiis created eighteen pieces: tables, lamps, stools and chairs. Most are metal and their iridescent surfaces and primitive forms elide a simple reading of light and shadow. They appear as though a magnetic field emanates from their center, drawing all that surrounds them into a glowing, multicolor aura. Their materiality isn’t always apparent, and that’s because De Cotiis is something of an alchemist. “There are some apparently very poor materials, such as fiberglass, which, once recovered and treated, can show reflections or unexpected shades,” De Cotiis says of his ability to take known materials and coax out of them entirely surprising effects. This playfulness—and the testing of one’s assumptions that it engenders—allows the work to capture, and then re-capture, attention. One of the standout pieces created for the exhibition—a low-to-the-ground, irregularly shaped table—appears heavy, until it doesn’t. An ever-so-slight peeling at a seam calls on the eye to reconsider what the brain claims to have already understood: is the piece a massive, cast solid, or a hollow, metal-clad shell? These seams attempt the impossible task of, in De Cotiis’s own words, “patching time,” to bring together past and present into a single, eternal shape.

The release of a new book, Vincenzo De Cotiis: Works, published by Rizzoli Electa, will closely follow “Éternel”’s US debut. He calls the book “a titanic feat”—no exaggeration, as its pages have the immense task of capturing the visceral bigness of his work, like the undulating sheets of reflective metal he installed at Ca’ d’Oro during the 2019 Venice Biennale. The work, titled Ode, reads as a love letter to patina, to age and to ornament, most of all in the way that the reflections of the walls of the palazzo glide and undulate on the installation’s metal surfaces. No one photograph can capture the effect—of Ode, or any of De Cotiis’s pieces—so essays by Anne Bony, Tom Delavan and Joseph Grima will venture to do so in words.

The signing for Vincenzo De Cotiis: Works and “Éternel”’s opening will come amidst a flurry that includes the Frieze Art Fair, the European Fine Art Fair and New York Design Week, a clear sign of De Cotiis’s rapprochement with the world of contemporary art. It’s a fitting evolution for a craftsman whose work has always been profoundly subjective—the result of an intense, mad energy combined with an almost fantastical rigor, and of a wholly Italian embrace of precisely dosed excess. 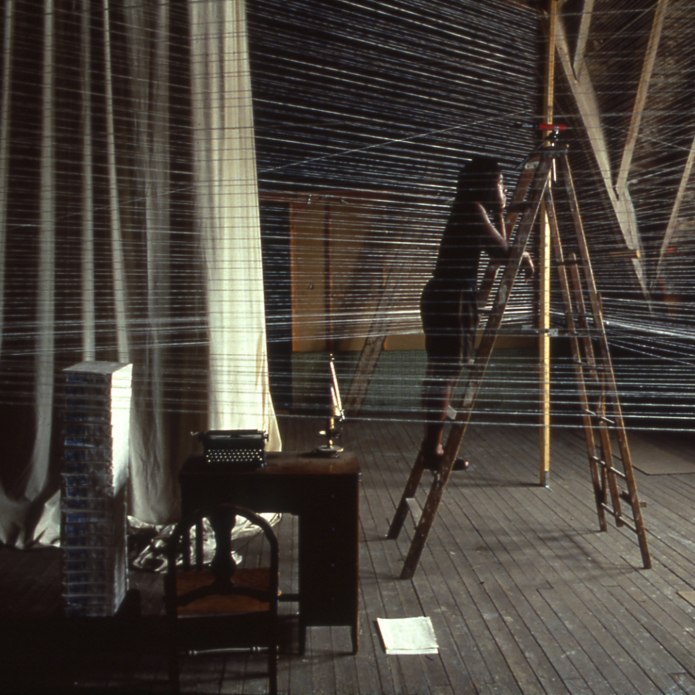