Life After Fiction: The Future of Lil Miquela

Lil Miquela is an Instagram celebrity who meticulously documents her life in Los Angeles, championing progressive politics and luxury fashion. The only catch is that she’s more cyborg than California girl.

Miquela Sousa is 19 and has deep brown eyes, freckles, and a button nose. She has blunt bangs and often wears her hair in Princess Leia buns. She’s active on Instagram, where she posts about learning Mandarin, learning to drive, and her Brazilian heritage; sometimes, she just posts a selfie with a caption like, “Found my light.” Her skin is smooth—porelessly smooth. Smoother than FaceTune. And that hair; something about it doesn’t lay and fall quite like real hair. It’s as if gravity is working slightly differently around Miquela’s head. Look into her eyes, and you’ll notice something else: Miquela is not a person, but a CGI character. She’s an avatar, a digitally rendered image. And, with 1.5 million Instagram followers to whom she promotes brands like Opening Ceremony and Prada, she may be our first and biggest virtual influencer.

Miquela’s Instagram is, at its best, almost uncanny in its ability to portray the tastes and ways of being of a 19-year-old Angeleno in 2019. Her tone is earnest, politically engaged, and self-aware. She’s pro-Black Lives Matter, trans rights and DACA. Both her image and the narrative told through her posts are crafted to elicit an is-she-or-isn’t-she speculation on the part of her audience. When I was writing this piece, it seemed as if everyone wanted to talk about Miquela and her reality. Did she fall into the uncanny valley? To what extent she was algorithmic? Were her captions generated by artificial intelligence?

Brud, the digital media start-up that created Miquela’s character and runs her Instagram, is tight-lipped and often gives fantastical answers to the press, no doubt to feed Miquela’s mystique. To start with, instead of calling itself something as prosaic as a branding company, or a digital effects workshop, Brud has called itself a “technology start-up specializing in artificial intelligence and robotics,” a claim that has been repeated, uncritically, in venues ranging from Architectural Digest (which featured co-founder Sara DeCou’s Los Angeles loft) to, more worryingly, CNN. (According to public records, Brud holds no patents in AI, robotics, or related fields. One person on staff, according to the company’s LinkedIn, holds the job title “lead robotics developer.”) Brud has made many other fantastical claims: DeCou’s company bio once stated that she’d been President Obama’s “special advisor on the ethics of AI development.” Her co-founder, Trevor McFedries—a former music producer and DJ who has worked with artists including BANKS and Katy Perry—once claimed to have authored a Bill of Rights for AIs.

Last year, Brud raised a reported $6 million in venture capital funding from firms including Sequoia Capital. The company has spent the last two years building Miquela’s Instagram following, always projecting a certain opacity about how exactly the images are produced.

On Instagram, Miquela refers to herself and to the two other Brud characters as “robots,” and pretends they have a sentient, three-dimensional existence. “Just a robot sitting on the curb in skinny jeans and wedges,” she writes. And though it would seem implausible on its face that somewhere in Los Angeles there exists a walking, talking, autonomously Instagramming robot whom nobody has ever photographed on the street—or that the IP behind such an advanced creation would not be patented—some people seem at least willing to entertain the idea, or to suspend their disbelief.

How, then, to conceptualize Miquela? The artist Ian Cheng compares Miquela to blockchain, another technology that emphasizes “an agnostic attitude toward agency: it may be a human, a bot, or an organization on the other end of a transaction.” Cheng thinks it’s “exciting” that artificial characters are achieving “person-level status in the eyes of public, even if within a narrow range of expressivity.” He continues, “That’s a weird and interesting future, and Lil Miquela is a useful primer for a general public who would not otherwise care about these ideas but may have to one day very soon.” When designer Elizabeth Hilfiger noticed Miquela on Instagram and heard she was a fan, Hilfiger, thinking she was a real person, sent her free clothes.

Fictional stories of human-computer interactions hold a deep appeal, from the malevolent AI in 2001: A Space Odyssey to the operating system Joaquin Phoenix falls in love with in Her and the ultimate filmic exploration of the vanishing line between human and cyborg, Blade Runner. I expect the appeal of these narratives will only grow in a world that increasingly abounds with real-life examples of such interactions. We now pose our customer-service questions to chatbots, and we allow ourselves to be subtly rerouted so the algorithms behind Waze and Google Maps can A/B test every decision branch of our commutes. We may have heard that in Japan, a voice-programmed hologram named Hatsune Miku regularly performs at music festivals; she even opened for Lady Gaga. Miquela has a Soundcloud page, too, and has released a series of singles. 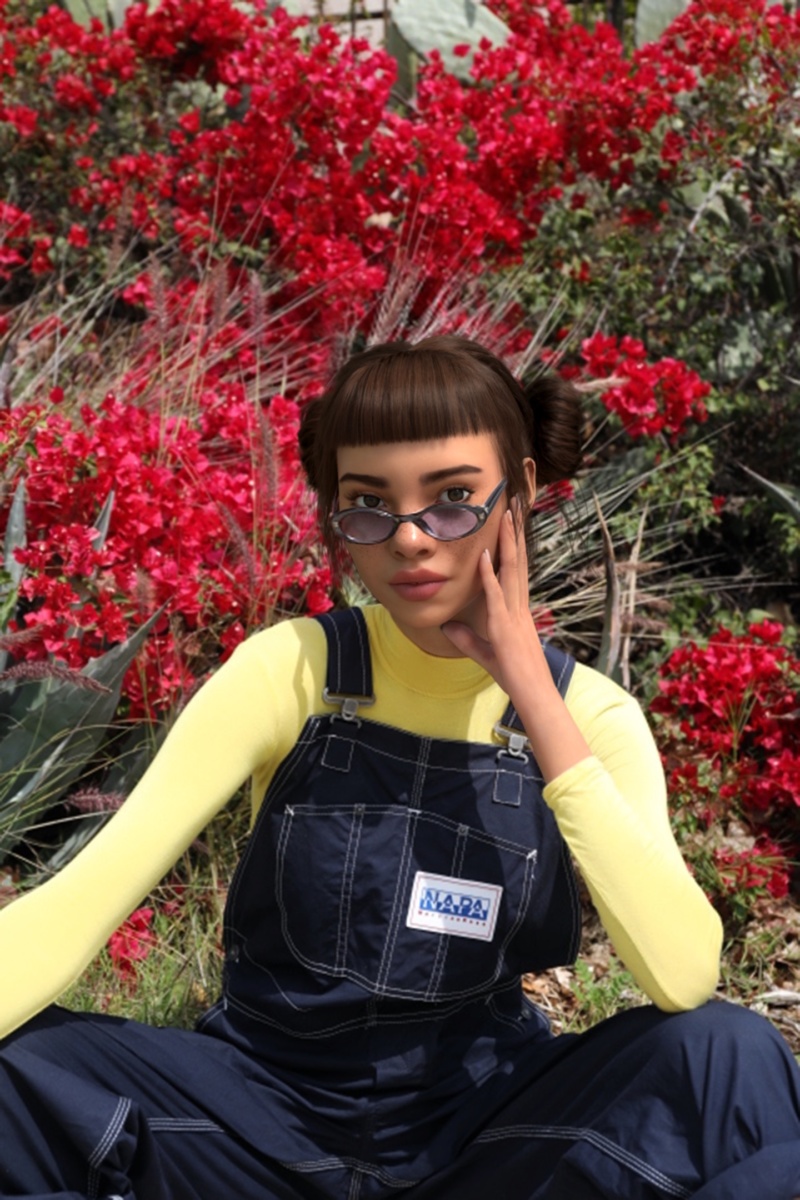 Miquela always looks the part of a young, cool influencer. She wears perfectly styled streetwear, and her clothes have a reality, an unmistakable drape and weight and texture, that immediately jumps out at a viewer, especially in contrast to her CGI skin and features. Images of Miquela are produced using proprietary technology Brud has developed, which explains why Miquela’s clothing always hangs with such dimensionality, and why the light, shadows, and picture depth look so real: the images are composites. Perhaps Miquela is best understood, then, as a kind of augmented reality. A digital flicker in a real image, an optional overlay to the real world.

Her poses and attitudes read as authentic, but occasionally her navigation of her character’s story and relationships can seem off.

The way her feuds with Brud’s other “robots” play out — the genre is melodrama, and the plot points have included love triangles and staged “hacks” of each other’s accounts—often seem tone-deaf, because they don’t conform to the much more subtle ways rivals typically interact with each other on social media.

In our visual culture, there has over the last decade or so been a turn towards a kind of flatness that is a function of the platforms we use. In 2016, the writer Kyle Chayka noted that, thanks to the globalization of design aesthetics via tech companies like Airbnb, we can travel the world without ever leaving the same minimalist, reclaimed-wood-and-Edison-bulb bubble that Chayka termed “AirSpace.” Miquela’s medium of choice is of course Instagram, which has made its own contributions to the banalization of visual culture. Its algorithms reward high-engagement but boring images. My feed abounds with selfies, sunsets, flat lays of manicured nails and coffee table books, and food shot from above. Instagram influencers all have the same eyebrows. In this environment, Miquela not only blends into the feed, she embodies its values. Given she is a brand herself, all Miquela’s posts about Black Lives Matter and civil rights are statements designed to position her in line with a certain image, no different than claiming identity through adjacency to any other reference. But in a space like Instagram, Miquela is, and can only be, fake in the ways that all of us are fake.

The writer Rob Horning wrote of Miquela’s politics that she “permit[s] a fantasy where social justice can be encoded, can simply appear within the frame like a form of augmented reality, superimposed over historical forms of struggle, which are made to fade into the background, even as they continue to intensify.”

Miquela is less a robot than she is a cartoon—a character in a kind of graphic novel unfolding across the square panels of Instagram. These days, we are not unused to animated characters in our media; every other blockbuster seems to revolve around members of the Marvel Cinematic Universe. Animated characters anchor tent poles and sell merchandise without triggering undue anxiety in their audiences over whether they are “real.” I suspect that what makes Miquela seem different is the fact that she lives on Instagram, which, like photography more broadly, is widely—but wrongly, of course—supposed to be a documentary medium. But as we grow more accustomed to unreal characters in our social feeds, as they already are in our films and video games, her strangeness will diminish.

I suspect that, sooner rather than later, fascination in exactly how “virtual” Miquela is will die down, as skeptical voices continue to debunk Brud’s more extraordinary claims about robots and AI. There are already fans who fact-check Miquela’s “public appearances”—for instance, by taking note of the perspectives from which her runway photos and videos are taken, and making comparisons with other photos of the same events.

When the fiction of Miquela as a sentient robot finally becomes unsustainable, what will sustain interest in her? What’s left will be her story. If the story Brud creates for her is a real enough fiction, people will keep following and double-tapping. If it tips into soap opera, or seems inauthentic to the medium or the character, they won’t. Miquela’s face is finely wrought, and those eyes, though clearly inhuman, don’t make me recoil—but it’s her story that may yet fall into the uncanny valley.