Atelier E.B Pays Tribute to the Mannequin at Serpentine Galleries

Beca Lipscombe first laid eyes on Lucy McKenzie at an opening in 2000. The recently graduated designer was on the lookout for someone to model for her eponymous label. McKenzie agreed, but soon their friendship developed beyond that of muse and designer, transforming in 2007 into a collective fashion project they call Atelier E.B, named after the cities where they live (Lipscombe in Edinburgh, McKenzie in Brussels).

In hindsight, the white cube feels as fitting a birthplace as any for a line that circumvents fashion’s exploitative production pitfalls by aligning itself with fine art and leveraging its preoccupation with method and material. “Through Beca I learned about the fashion industry and processes,” McKenzie says of Atelier E.B.’s roots. “We started to collaborate when it became obvious we had a similar interest in local history and attitudes to things like self-sufficiency and transparency.”

Whereas Lipscombe and McKenzie still maintain their own practices as an independent designer and an artist represented by Galerie Buchholz and Cabinet, Atelier E.B operates as a space for promoting shared concerns, including the preservation of indigenous crafts and rethinking of traditional display and dispersion strategies. Over the years, the duo’s ideas have manifested themselves in forms ranging from garment design to immersive pop-up boutiques, furniture, zines and sculpture.

This October, all these elements will coalesce for “Passer-by,” the pair’s solo presentation at the Serpentine Galleries in London. Rather than follow some loose chronology, the survey-like exhibition focuses its attention on a longtime fascination of Atelier E.B: the mannequin, culture and commerce’s most overlooked muse. “As fashion designers, we understand how problematic it is to display clothing, whether it’s a photoshoot we are producing or how it hangs in one of our boutiques,” Lipscombe says of the exhibition’s theme. “I think when you look at the mannequin and its history you tap into this ongoing, contentious dialogue surrounding the body and its connection to value and taste. We wanted to tease out that history but use the pieces to create our own alternative narrative. We wanted to leave room for mannequins to play partner rather than surrogate.” 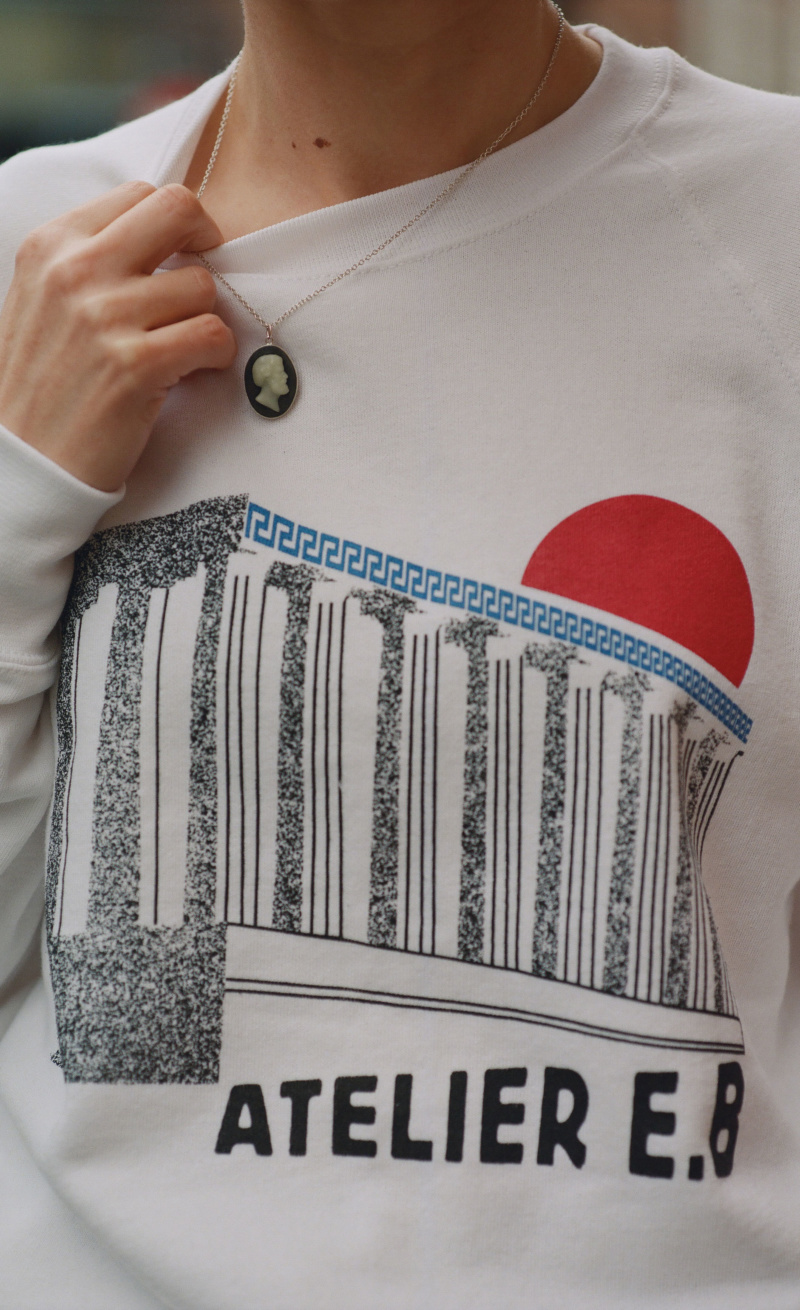 In this way, "Passer-by" stands as a subjective history of the mannequin, its displays and its connection with fine art. Fact and fiction mix to the point of hallucination in this show structured as an IKEA-like parkour. Lipscombe and McKenzie dedicate the first chapter to creating context around their hero. Using vintage models and images mined from extensive research into early window displays, they illuminate the evolution of marketing tropes. Their final installations, which strike the balance between department store and natural history museum, conjure the stately world pavilions where some of these products—and prejudices they engendered—were first shown. “What struck us when looking into the history of mannequins was their relationship to the World’s Fairs,” McKenzie says. “Department stores were just being formed, so even their design felt revolutionary. It’s at the World’s Fair where people began establishing the vocabulary that we still see today.”

As soon as the conventions are set, Atelier E.B dismantles them, introducing its own interpretations. They asked for help inviting friends like Tauba Auerbach and Marc Camille Chaimowicz to create mannequins who wear examples from past collections. “What surprised me is that no one submitted a standing figure,” McKenzie says of the new sculptures. “In the past, we’ve also been attracted to a lounging position, but it was interesting to see our friends echo this impulse for a more casual posture.”

Emblematic of its creators’ reverence for the artisan’s imagination, this avenue of commissioned figures foreshadows the grand finale: an operational atelier where visitors can try on and purchase garments from Lipscombe and McKenzie’s latest collection. “It was important to us that there was a space in the exhibition for a more intimate interaction with the clothes,” Lipscombe explains. “We created an interior where you can have that human exchange between customer and sales clerk. Atelier E.B has always been about this kind of call-and-response to our customers.”

It’s true. Rather than eschew the utilitarian diktats of fashion in the name of being avant-garde, Lipscombe and McKenzie embrace a comfort-first approach. The designers believe that it is ultimately the owner who provides context and value to their garments. “I understand that some people expect or want fashion to be entertaining or challenging in the same way as fine art is,” McKenzie says. “But I’m more interested in fashion that generates its own internal logic and is about the feelings and experiences of the wearer, as with the sportswear of Bonnie Cashin or the dresses of Madeleine Vionnet. That’s why our clothes are so ordinary—it’s their presentation that activates their inner meanings.” 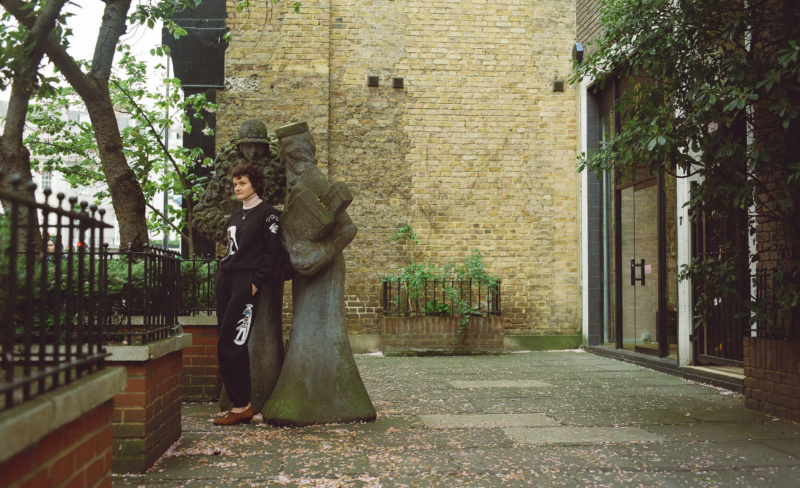 Photographers Zoe Ghertner and Josephine Pryde lead the way at the Serpentine. Lipscombe and McKenzie asked the artists to shoot their new collection—cashmere and nylon tracksuits, soft jackets and 3D-printed cameo necklaces—as they saw fit, and then bound the results into an accompanying publication which will be published after the exhibition.

Of course, it wouldn’t be Atelier E.B if the designers didn’t invite the public to join in, which is why they designed Cleo’s, an app that allows users to upload and share their own fashion images without the pressure of likes or follower counts, and that encourages meeting in the real world. This digital extension of “Passer-by” underlines what separates Atelier E.B from other independent labels like Bless, Bernadette Corporation and Susan Cianciolo’s RUN, which in the late 1990s sought to use the vocabularies of art and fashion to subvert both. Atelier E.B’s goals aren’t simply about disruption, labor or displacement, but rather about establishing a sustainable network for cultural exchange.

One doesn’t need to look further than Lipscombe and McKenzie's list of thank yous— a slew of Scottish and Belgian manufacturers, umbrella makers, Ratti silk printers as well as the fashion house Vionnet—to see the full picture. Atelier E.B isn’t a language but a village: a joint purpose that allows individuals, including its founders, to flourish. “The truth is, I would have probably given up my own label and still be teaching or freelancing for others,” Lipscombe says of Atelier E.B’s collaborative nature. “It’s a lonely business working on your own. What I enjoy so much about Atelier E.B is that Lucy and I work on it in isolation but then come together to share and discuss. If I still had my own label the garments would not be the same as we produce for Atelier E.B. Atelier E.B is two points of view, tastes, experiences, skill sets.”

Friendship forms the center of Atelier E.B, which is why perhaps the project resonates with me as a kind of sisterhood, one that seems to extend across centuries and binaries. Walking home past the mannequin shops that line 25th Street, I see my neighbors like never before. They are praying, lunging and leaping in yogic postures—twisting themselves into unfamiliar shapes in the dark. We are all synchronized.