Frequent Cultured contributor David Sokol has spent the past few years transversing New York's Hudson Valley in search of the extraordinary. This summer, his research culminates in Hudson Modern, an architecture book looking at the unique visual language that defines this art-historically significant area's residences. We check in with Sokol on what drew him to his subject and how his inspiration plays out in the pages.

What drew you to focus on the intersection of art and architecture in the Hudson Valley? I’ve been aware of the Hudson River School since I was a kid, when my father pointed out the “very important painting” hanging above the upright piano in my grandparents’ house. While that painting grew legs some years ago, there were many afternoons while living in Beacon, New York, when I’d pinch myself at the golden light that matched my mental picture of the artwork.

As I settled into Beacon in the mid-aughts and neighbors and friends learned that I wrote about architecture for a living, I would get tips about funky, high-concept, glamorous and generally ambitious houses going up nearby or hiding behind some stand of trees. One-offs accumulated into a trend, and I wondered whether the experimental architecture of the 1960s-era Hamptons had simply migrated to the Hudson Valley. Then I dug farther back into my memory and realized that the creative roots of this Hudson Valley modernism might, in fact, reach to the very first American art movement. I hope that readers of Hudson Modern agree that there are fundamental ideas—an awe for landscape, a desire for conservation, the unspoken reliance between nature and technology—that cross the two disciplines and centuries. 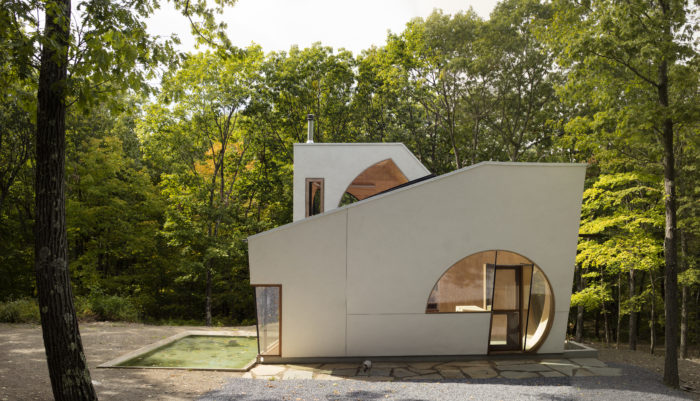 What kind of research did you do for Hudson Modern? How long did you spend researching before beginning the book? Hudson Modern goes back 10 years. That statement makes me sound like a preternaturally deliberate researcher, but because I’m a member of the Cultured family, we can be frank: it took some time for this book pitch to find a home; add my own foot dragging to the mix, and well, here we are. But I’m grateful for the long gestation period, especially for the focus that came with the Great Recession. For some of the houses featured in Hudson Modern, the economic downturn informed or even changed design direction. Speaking for myself, I would say that the humility and the slowness of the Great Recession drove me to be more rigorous about project choice. I wanted this book to celebrate houses that are deeply felt, intellectually delicious and respectful of place.

What is your relationship with the architectural experts that you feature in your new book? I was paid for my first magazine story, which incidentally involved Beacon, in my junior year of college.And with the exception of a story involving an Icelandic photographer and the sexual liberation of elves, I have been writing exclusively about architecture and design in the almost 20 years since. There are architects featured in Hudson Modern whose kids I would snatch from oncoming traffic (suffice to say that that anecdote ended well). There are others whom I had known in passing from previous writing assignments, or only by name. I feel closer to each of these designers now. There is something very personal about creating a house, whether it belongs to a client or to yourself, and touring and talking about that house can be revelatory in turn. I liken reporting this book more to spiritual connection than information gathering. Actually, I hope that all of my reporting is that connected.

From the 17 homes you feature in your book, is there one that you feel particularly attached to? Ah, the Sophie’s Choice question. I lean toward the more petite buildings by Sharon Davis, Alan Orenbuch, Janson Goldstein and others, because I equate smallness to a civic mentality. Pour me a scotch, though, and I’ll admit to crying at the River House. It was inside the treehouse-like office that Steve Mensch placed on the far end of his courtyard. Looking back at the main house and the Hudson River, you catch your breath—can you believe that someone conjured this remarkably thoughtful, multilayered place from nothing? None of the architects spotlighted in Hudson Modern phoned it in, not in the least, and the seeming boundlessness of human creativity tugs at my heartstrings. That it moves me still proves that I’m in the right line of work.

Can you tell us about your writing process. Like I’ve intimated, reporting is a very vulnerable process. For everyone. If you want your subject to really self-examine the goals of her work, and to assess the outcomes honestly, then you have to give fully of yourself too. You have to model the behavior. As for the writing, I regularly commit 10th-grade English class sins. In particular, instead of drafting a text and encapsulating it in an introduction after the fact, I slog through that introduction first. And I try to do it without notes. Awful. But for me, it captures the ideas and quirks that I remember most from my reporting—and if these things haunt me, hopefully they will resonate with the reader. It clarifies my purpose. New with Hudson Modern was to give each chapter some breathing room, which you can do when you’re dragging your feet. When you print out a handful of chapters and experience them as a collective, you can catch duplications in the way you structure a narrative, in turns of phrase or even in punctuation. Fixing these repetitions is, in fact, a forcing of yourself to think more broadly.

What advice do you have for young writers? Young writers come in many stripes, says someone who has worn each of those stripes on his sleeve. To my younger brother who wants to become a generalist writer, I say don’t—with specialization comes an expertise and passion that readers respond to, and which can sustain you through the gray times. To the person grappling with impostor syndrome or writer’s block, why not write about that? To the young writer feeling barricaded from opportunity, remember that there’s no such thing as a dead end, that everything is material you collect for grabbing people’s hearts and minds. I could go on, but it all boils down to: practice your craft, have patience, circulate in the world and be generous with your gifts.

Eight Architects That Artists Love to Work With