The Artist Formerly Known As Grimes

“I’ll try not to say anything scandalous from this moment forward,” the musician formerly known as both Claire Boucher and Grimes promises as a waiter brings us menus at a Los Angeles Buca di Beppo. These days she goes by “c,” the symbol for the speed of light and the name she legally adopted last year because Claire has been “plaguing” her. “Though she turned 31 this year, c could pass for a teenager. She arrives to our pasta lunch on the hunt for an Arrabbiata—a bite of which she later kindly offers to share—in dark sweatpants, a white tee shirt with a Russian transliteration printed in red across the chest, and streaks of amethyst in the long strands of her unkempt hair. After we order, she makes a point to ensure that the waiter has taken my order correctly—a welcome, perceptive consideration. Following a morning of dealing with “press drama,” she plans to head to a League of Legends session at a friend’s house later.

In 2018, c was the subject of a bizarre tabloid-esque spectacle that began when she appeared on the Met Gala red carpet with boyfriend and Tesla CEO Elon Musk, and peaked several months later with a personal and professional falling-out from which c is still reeling. Her relationship with Musk, which managed to survive the media fallout, shocked fans, many arguing that she’d sold out on her morals by getting cozy with the eccentric tech billionaire who’s been both deified and vilified for his futuristic exploits (he is currently dealing with a securities fraud case in which c was subpoenaed to testify). “There’s just been these major betrayals,” c says, reflecting on what she’s called one of the most traumatic years of her life and explaining why she’s sworn to collaborate only with friends moving forward. The public shaming, as she deems it, has been more than just a lesson on who to trust. It’s also been a dissociative challenge: “You just have to totally untether your personality from your public persona. I’m like, I don’t want to use that name anymore. I don’t want to use that face anymore. Because it now stands for something that I don’t agree with.” c says she has a difficult time recollecting anything from last fall. “The one thing I’ll say is just don’t believe everything you read. Just because people wrote about it does not mean it’s fucking true.” 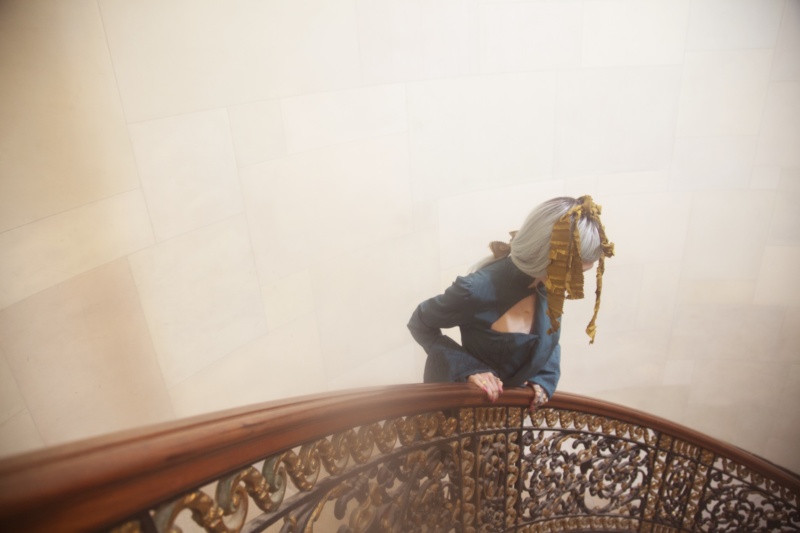 Fans of the Vancouver-born art pop musician would know that while celebrity scandal is new territory for c, she’s had her share of extreme experiences. There was the houseboat incident in which she left her home in Montreal for an ill-timed and short-lived jaunt down the Mississippi River. There’s also her retelling of the making of Visions, the album that propelled her into the indie pop canon, which she produced and recorded during a weeks-long, sleepless, self-imposed isolation. Part of c’s appeal has always been her fist-in-the-air approach to life, an attitude she says is partially rooted in her early initiation into crust punk culture. When she moved to LA four years ago, around the time she released an expansive, polyphonic fourth album, Art Angels, things changed. “I didn’t realize how much everyone else was not like that. I think over the last few years, moving to a big city, I’ve just been socialized a bit more. I was a little bit feral,” she giggles.

c can be self-deprecating, which registers as a defense mechanism honed through years of audaciousness and discomfort in the public eye. “The last album was a piece of crap,” she says. “I feel like people really misread it and it feels like a stain on my life.” She resists the notion that she tried to make a pop record, and considers it more of a genre exercise in which she demonstrated her range as a producer. “I just wish I could make music in a vacuum,” she claims, before retorting, “it’s good to make people mad actually, I retract my statement. If you can make people mad without actually hurting anyone, that’s probably a good thing.”

Her new album, Miss Anthropocene, is, according to c, an amalgamation of three albums she recorded over the past three years, and is still in flux. Based on a neologism commonly used in scientific circles, “misanthropocene” refers to both the misanthrope’s loathing of humanity and the Anthropocene era in which our planet is dominated by human activity. “It’s anthropomorphizing climate change,” c explains, touching on her fascination with the way ancient Greeks used gods to personify existentially threatening concepts. “It’s sort of about this demon of the end of the world, this character that’s like the Voldemort of climate change. She’s relishing the end of the world, and it’s an album about how great fucking climate change is.” 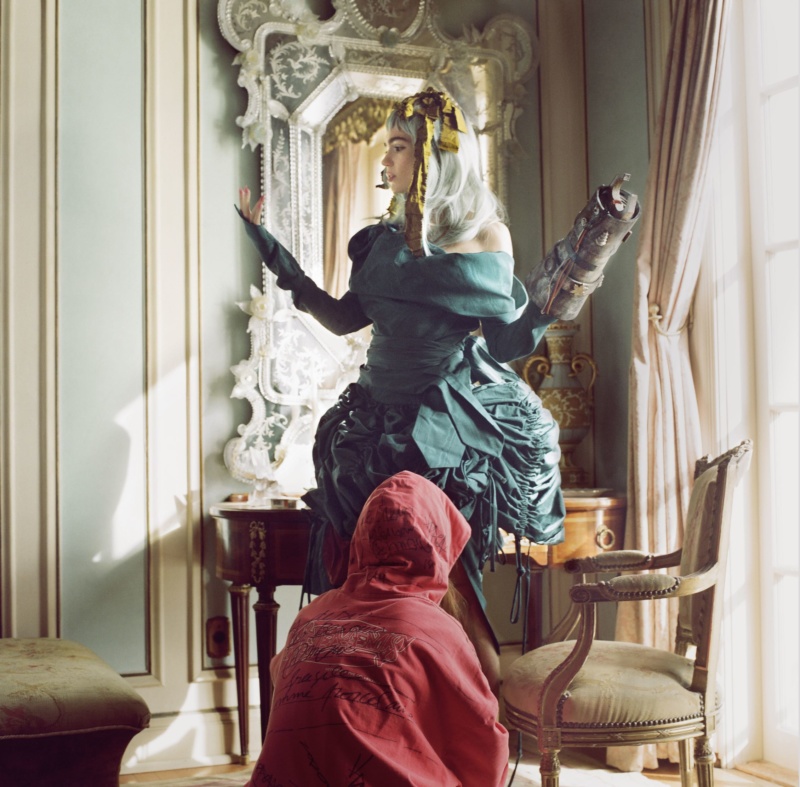 Talking with her, it’s easy to reason that the project of c has long been a dissociative, identity-navigating mechanism. Her music has always combined the conceptual and the vulnerably personal. “If everyone sees me as a villain, how do I make the best villain ever?” she asks, elaborating on the record and drawing a parallel between its character and her own experiences. “She is a musician for sure, but she comes at music in such an abstract way, which really inspires me,” says HANA, a close friend and long-time collaborator who’s featured on c’s latest single, “We Appreciate Power.” “She just makes me question the [music rules] that I would normally go with.”

A preview of three new songs finds c excavating her emotions while constructing a sonic environment for her dark supervillain. Ominous guitar feedback meets sharp, whale call-sounding synths to form the underbelly of a standout called “So Heavy I Fell Through the Earth.” c says the song, whose mystifying lyrics ride an angelic vocal melody, is about how love can be like a poison. “Specifically how when a dude comes inside you, you become in their thrall—how it’s an attack on your feminist freedom,” she illustrates. It’s a song that communicates best how much she’s changed over the last year; notably, in the context of her romantic relationship. “It’s sad how love can be this beautiful thing, but then love is the thing that’s fucking up my career,” she confesses. “The biggest change for me this year is losing my hardcore masculinity. I used to just be free—free of all this bullshit that it seemed like all the other girls were going through, and now I feel like I’m not.” 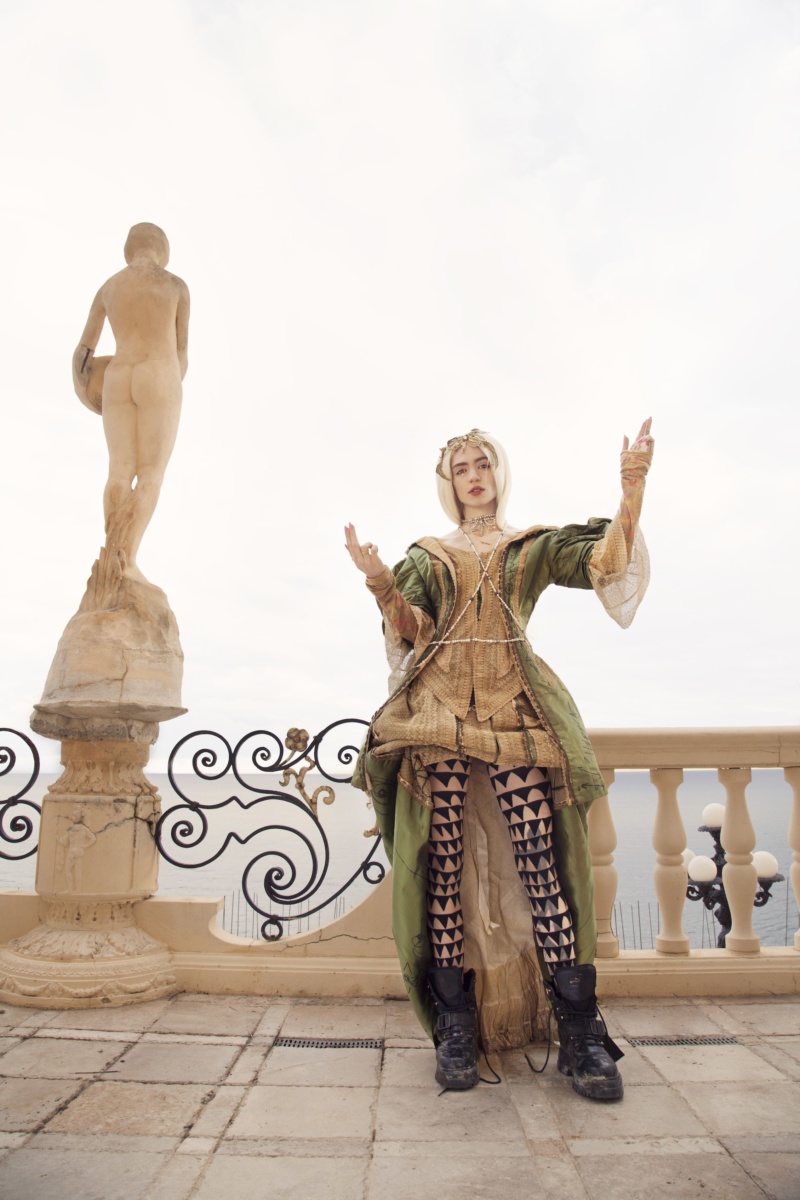 She also sent a pared down early mix of a love song she made just a couple days before we meet called “Shall I Compare Thee.” It’s lo-fi, airy, and refreshing in its simplicity. A narrative complement to “We Appreciate Power” arrives in “My Name is Dark,” which c says is about all the people she knows who didn’t vote in the U.S. presidential election. Sonically, it renders as soul-sucking apathy, with warped guitar strums, looping echoes, and a chamber of distorted voices that sound like they’re drowning or getting sucked into a black hole.

For every extreme c experiment or reaction, there is a softer c that reels her in or revises her provocations. Though she’s fascinated by our current moment’s existential dooms, she also expresses an earnest optimism for the future: “Gen Z is probably going to be the first reasonable generation,” she says. Halfway through our conversation, she effusively apologizes for any earlier negativity. “A lot of my bullshit has really affected a lot of people in a way that I will never recover from because I feel so fucking bad about it,” she says about her harsh social media responses to critical fans. “I’ve been feeling the increasing incongruence of the interpretation of me versus the reality of me, and rubbing up against that more and more until it hit sort of a breaking point this year, where people just got mad,” she admits.

“It’s just interesting to learn about different ways the world works. I was a fucking idiot. The reality of the situation is there is no reality. Everybody thinks there’s an objective truth. The thing is that everybody’s right and everybody’s wrong,” she concedes. The way c can so quickly turn her conviction off and on is admirable and like watching micro ego deaths happen in real time. Her humility radiates. As we finish our meal, she draws a sensible connection between her growth and her gaming habits: “I’m kind of exiting that vibe [of only playing the hardest games like Bloodborne and Dark Souls because I’m so hard]. I’m trying to learn softness and joy.”