The rising star returns to painting with his distinctive commingling of figuration and abstraction.

“My work is generally very hopeful. I’m thinking about life post all this bullshit, post all the oppression,” Ferrari Sheppard declares, envisioning a world where Black people are free from the violent history of slavery. If the titles of James Baldwin’s 1963 book The Fire Next Time and Tupac Shakur’s iconic “Holler If Ya Hear Me” record of 1993 birthed a creative brainchild, it would be Sheppard. On the heels of a decade-long hiatus from art making, Sheppard has returned more poignant than ever and with an eternal optimism illuminating from within. The artist’s first solo show, “Heroines of Innocence,” presented at Wilding Cran Gallery in Los Angeles, sold out before it even opened.

Over ten years ago, when he was a student at the School of the Art Institute of Chicago, Sheppard became inspired by Renaissance-era master storytellers of hyperrealism. In time, his evocative style took shape, bearing fruit in large figurative abstract paintings. But life immediately after college would see Sheppard take a different path. A stint in journalism, interviewing the likes of Erykah Badu, M.I.A. and Little Dragon for his own publication— the now-defunct Stop Being Famous—led to the formation of alternative Hip Hop group Dec 99th with Mos Def, while Sheppard was living in Africa. For years, Sheppard traveled the continent, calling Tanzania, Ethiopia and parts of South Africa home. Encumbered by homeland security upon reentry to the US in 2016, he was again, as in childhood, confronted with the realities of being a Black person in America. “When I came back, I was detained for six or seven hours. They wanted to know why I’d been living in Africa,” he reflects. “It was like ‘welcome back, get your hands up against the wall.’”

Born in New York and raised in Chicago in the 1990s, Sheppard lived through the urban decay prevalent in inner cities where racist criminal policies resulted in the over-policing of Black men and the deterioration of Black neighborhoods. “The police would literally pull me and my friends over so many times that I thought our existence was wrong,” he recalls. From the effects of the War on Drugs of the ’70s to the 1994 Crime Bill—which ignited the flame of mass incarceration that still results in one in three Black men in America entering the prison system in their lifetime—Sheppard witnessed the criminal justice system wreak havoc on his community. “Low level crack dealers were getting draconian sentences under the mandatory minimum sentencing laws. One gram of crack rock would get you the same amount of time as 100 grams of powder cocaine. It was used as a reason to completely erase parts of my generation.” 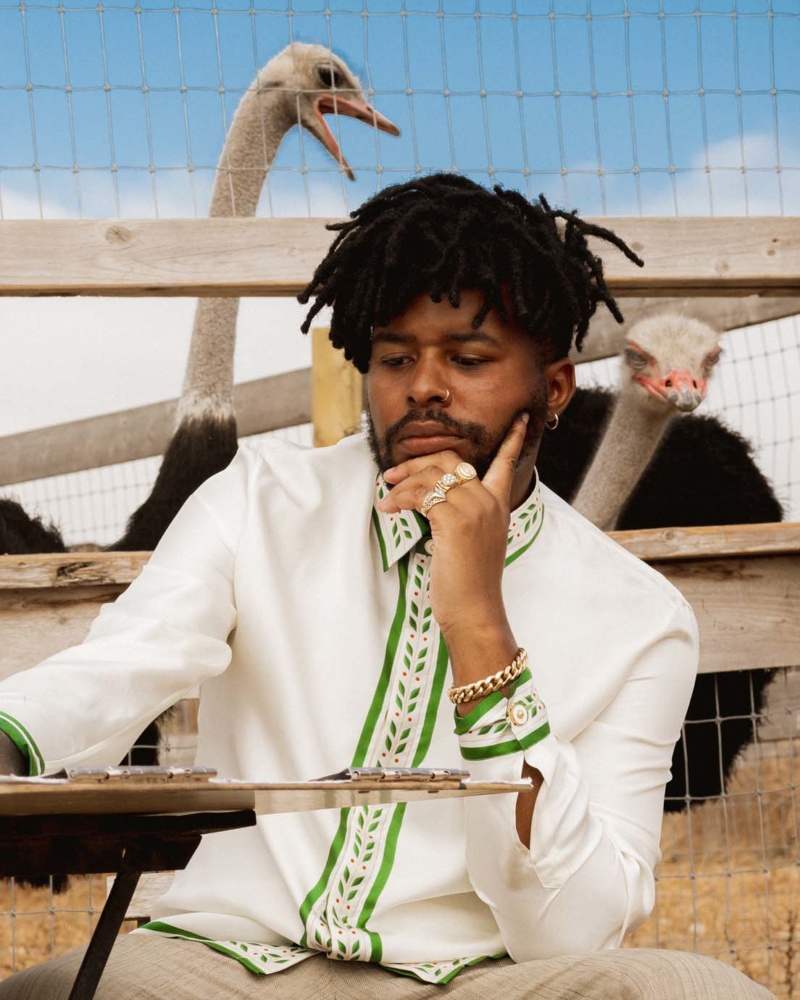 Facing the trauma of Black life in America, how does one wrestle with the seemingly endless stream of violence and terror that white America continues to inflict on Black citizens? “Pain is easy for me, because I’ve experienced it, and I think every human being has experienced pain; but, to be able to articulate beauty, that is rare, and it’s so necessary in this world,” Sheppard reveals. The illustrious and eponymous series debuted in “Heronies of Innocence” transports viewers to a new world that is both far from reality yet instantly nostalgic. Filled with joy, Black children play with carefree exuberance, mothers clutch their babies lovingly and women find indulgent moments of healing solitude in quiet repose.

A sense of purity fills Sheppard’s canvases, made more magnificent through a radical new imagination of Black life. Rendered in acrylic and charcoal elaborated with 24-karat gold leaf, figures come alive under muted tones entwined with livelier hues. With a window cracked open ever so slightly, Sheppard offers a glimpse into a universe of his own making, summoning a well of emotion with intense clarity. How does Sheppard see us? “I started to envision a world where Black people had never been enslaved.”