The Woman Who Saved Menswear: An Emily Adams Bode Story

Several oil drums, a precarious array of hats, potted plants, iced coffee, stacks of crocheted lace and geometric quilts, a drum set of corduroy-topped stools and a choir of sewing machines: this is the inanimate orchestra of Emily Adam Bode’s Chinatown studio. On first glance, the visual cacophony deafens the senses, strummed forward by the graceful yet restricted motions of fashion production—folding, cutting, pinning, stitching, packing. And so the first word on my tongue is that of silencing judgment: “hoarder,” it says. But my instincts are wrong. My eyes adjust to the saturation. This is not an arbitrary assemblage of compulsion; it is the juice behind Bode’s synonymous menswear line and the lens of her life.

Bode and I find common ground, namely the 26th Street Flea Market (first introduced to me by the late, great design enigma, Jim Walrod) and the Brimfield Antique Show (the US’s oldest mega flea). When I still lived in Massachusetts, I remember my mother driving us to Brimfield’s tented fields, but they all blur together in the car trip of nostalgia. I was a passenger. Bode is a driver. Her biannual pilgrimages are just that—a communion with a group of friends she’s been staying with and shopping beside for almost a decade. Together, they’ve amassed treasure, their eyes and desire evolving with each discovery. “When I go to Brimfield or India, there are certain things that I’m looking for, of course, but the joy of those places is discovery. There are things I’ve learned to look for. Over time, I’ve seen so many fairs that I’m now able to see the pieces that are not like the others.” Originally a time for ad hoc discovery, her more recent fiber-seeking trips necessitate more than browsing. She has quotas to fill now: yards upon yards of vintage textiles, most of which she will upcycle through her clothes. 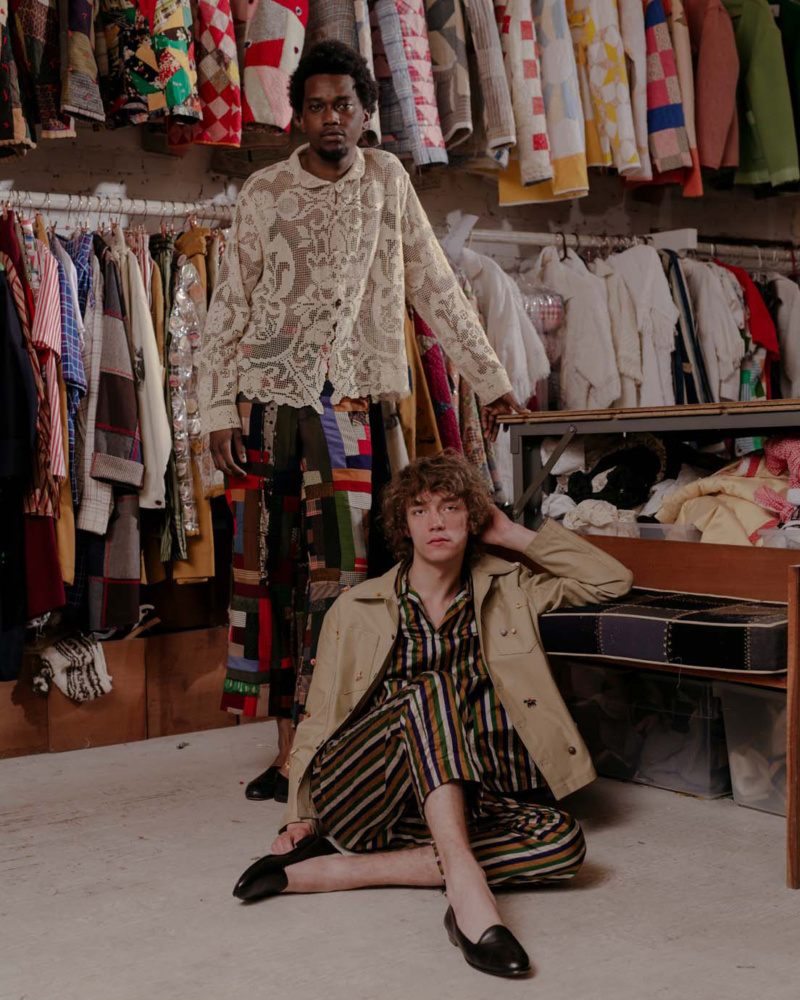 The need for lists is a kind of growing pain, one that signals the ways Bode has changed in its short but sweet history. First launched in 2016, Bode began as a couture studio producing pieces one by one in a way that resembled an artist’s output, but in 2018, things shifted. Bode debuted her first Vogue.com certified presentation and in doing so became the first female designer to show at New York Men’s Week. Lauded for her ingenious use of thrifted materials and rejiggering of the American fashion vernacular, the designer picked up her first major retailers and the CFDA Fashion Fund award. More accolades followed. This year, the fashion council doubled down on their praise awarding Bode with their Emerging Designer of the Year title. Forbes also gave a nod, adding her to their prestigious 30 Under 30 list. In June, she stages her first runway show as perhaps the most anticipated new member of Paris’s Men’s Fashion Week.

The roaring attention seems to bemuse Bode, whose voice is affected with a hushed humility and intense purpose. When I bring up her success, she reverts back to her own goals. “[Bode] felt like a project. It was something for me to test if I was a designer,” she says. “Through the process so far, I’ve learned that if I wasn’t making clothes this way, I wouldn’t know how.” I marvel in the evidence, her small team working in close quarters with their supplies. It is the best kind of layer cake.

During my first visit, Bode is glowing in the fat minutes before research spurs into action. Tracing the connectivity between oral and visual history is intrinsic to Bode’s ethos and the way each season emerges. Her collections find their home in a concept or a muse that often refuses the circumambient logic of streamlined mass production and market briefs. Leisurely lunch conversations with friends, voracious reading and visual research kicks off what is an entirely hands-on process of digestion and creation. 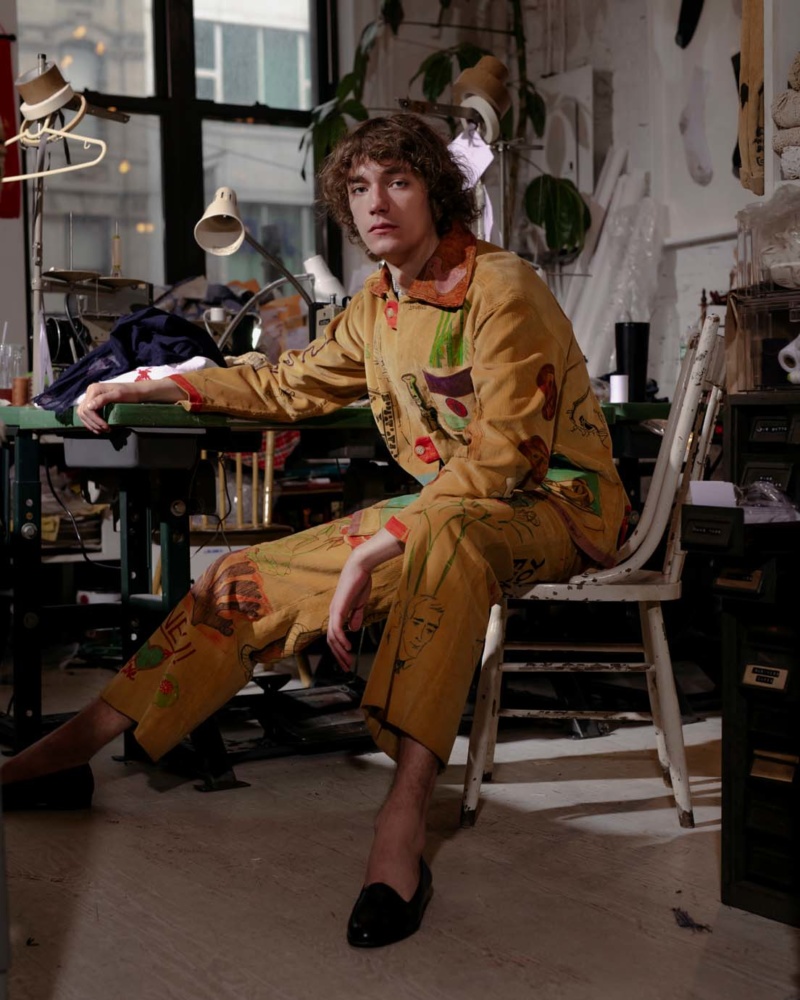 Her soon-available Fall 2019 collection sprang out of her relatively new friendship with Todd Alden of Alden Projects, a Lower East Side bulwark for music and art ephemera. “I’ve definitely never thought of myself as fashionable and I don’t think Emily picked me for my aesthetics,” Alden admits, laughing. “I think her interest came from what we share. We are both collectors and when we spoke, that was her primary interest—what it was about these things that made me want to save them and share them with other people.”

The resulting garments decamp from any literal interpretation of Alden or his printed-matter-driven gallery. There are corduroy pants tattooed with Picasso plates, bottle cap-adorned PVC raincoats and striped patchwork suits. Bode says the ideas for each sprang out of phone calls and lunches discussing how his childhood fascination blossomed into a career. “Storytelling is an organic part of making clothes. In the case of Todd, I think I found someone that had the same impulse or narrative, but maybe a different way of how it was expressed. As someone intensely interested in collecting, I feel like it’s important to seek out those moments of introspection.”

With so many milestones already under her belt, the kneejerk is to ask what’s next. Her 40-plus retailers are hounding her to launch womenswear, as are some of her private clients. “I wish I could just switch on a desire to do womenswear, but it’s not that simple. I started Bode with a concept in mind. I wanted to create clothes that made room for a different kind of man, or maybe just a new kind of story. I liked the idea that feminine crafts could be my tool, that crocheting and quilting would pave my entryway into the vocabulary of masculinity,” Bode says. “So when peopleask me to make womenswear, I have to tell them I would if I had an idea of how to go about it.” For now, the brand remains singularly minded, giving a second life to the canons embedded in our textiles. Like the abridged Italian folktales of Italo Calvino, there is a collapse of collective truth and fiction in the garments. The quilted jackets with their sunny pastels feel both heavy and light. The nostalgia is painful and warm, like a sunburn.