When I sat down with Ian Cheng, I was drinking a Diet Coke. We met in a third-floor office in New York’s Gladstone Gallery, where his solo exhibition, “BOB,” was recently on view. We were there to talk about the show’s eponymous star, a three-eyed algorithmic snake writhing across 18 screens in the ground floor gallery below, and the suite of instructional drawings, including a stunning thangka, that accompanied it, which became a sort of inspirational talisman for the artist. But somehow we kept returning to that bottle of soda.

I’d been trying to cut out Coke, see. To change my habits and understand my motivations, in order to figure out and achieve my long-term goals, or something like it. I even started bullet journaling. Instead, I should have turned to Cheng, who had been spending his days reading philosophy and child psychology. His gentle pedagogical style unfurled additively, dissecting a concept down to its elements and then repeatedly returning to refine it. The Coke became “the gray cap, the clearness, the dark liquid, the red stripe,” and a recurring prop to explain the workings of his creation, from machine learning through to the Jungian “congress of demons” and “angels” that inform its every action.

“Maybe I’m into religion now,” Cheng smiled. Sitting with him in that white room high above his creations felt a lot like watching someone play a game on god mode. Fittingly, BOB is short for “bag of beliefs.” It’s an artificial lifeform sheathed in a fiery vermillion skin and covered in nubby beige bits that suggest a halfheartedly peeled piece of turmeric. It lives and dies in a spare, blush- colored environment whose curvature and single arched window suggest some kind of Rapunzel-like incarceration. Mostly, it just thrashes around, occasionally getting electrocuted or blown up, and dying.

But more than anything, BOB is alive, replete with a personality. BOB’s squirmy undulations are closer to those inflatable men outside car dealerships, but it gambols like a puppy chasing a ball. It even seems to throw tantrums, pouting and stamping its many legs when it doesn’t get its way. An ambient, granulated score—Cheng worked with sound designer Jeremy Yang—creates a real sense of atmosphere, as well as a visceral sense of BOB’s body as it collides with other objects.

Cheng is no stranger to worldbuilding, and even worked at George Lucas’s special effects studio for a time before he considered making art. “I love that he made every planet its own biome with its own culture, with its own people with their own, you know, pots and pans and weapons and foods,” he says admiringly of the Star Wars universe. Cheng is known for creating emotionally robust animal avatars too. An older work, the otherworldly Emissaries trilogy from 2015–17, which will be on view in the Giardini at the Venice Biennale this summer, featured a Shiba Inu as protagonist (Cheng himself has a Corgi). The outdoor LED wall was also on view at a former hospital and historic house at the Sharjah Biennial through the summer. When I saw it there, it was plaintively beautiful, but the dusty desert air conspired with the historic town to make it feel like a missive from the past instead of the future.

With BOB, Cheng wanted to create an entirely different kind of interaction with the viewer, where the creature becomes like “a c-list Twitter celebrity or a Real Housewife or one of those YouTube stars, someone who has agency and personality and a life of their own when the cameras go off, but comes alive in relation to us, as viewers.” I think of the AI (aeai) stars of the Hindi soapis in Ian McDonald’s sci-fi novel River of Gods, a concept that seemed so far off when the book was published in 2004, but which BOB makes a reality.

An earlier, “much stupider” iteration of BOB was shown at London’s Serpentine Galleries last spring, but that creature wasn’t able to do much more than recognize things and perhaps make inferences (green cap, same liquid, and red stripe? Probably also Diet Coke). Cheng realized that just as humans need a motivational framework—perhaps even desire it on a deep, primal level—so too does BOB. “The really exciting thing about BOB was to explore how its mind could be constructed in a motivated way,” he enthused, later adding, “I learned a lot about myself and a lot about human behavior by trying to actually make BOB. I never considered how much of intelligence is really simply about what you’re motivated by in the very near or far future.” BOB 1.0 was a snake too: Cheng chose the serpentine form because he’s “not trying to replicate human level intelligence. I mean, we are so far from that day. I can see the pathway to it, but we’re extremely far from that.” He adds that understanding the cognitive architecture of animals allow us to understand our own baser, primal instincts. As such, the Gladstone BOB is motivated by a number of limbic motivators which he calls demons. “You know, fight or flight, hunger, sleep, the need to explore. Each demon is governed by a little story or script. The eater demon, it’s motivated to find food and opportunities for food, simple as that.” Continuing the soda metaphor, he adds, “So when BOB now looks at the Diet Coke, BOB says, ‘Oh, that’s a tool for my eater demon to fill its story.’” An empty bottle, meanwhile, would be registered not as empty but as “irrelevant,” while one filled with snakes wouldn’t be understood as dangerous so much as an obstacle impeding snacktime. Everything BOB encounters is perceived as either a tool, an obstacle or irrelevant. 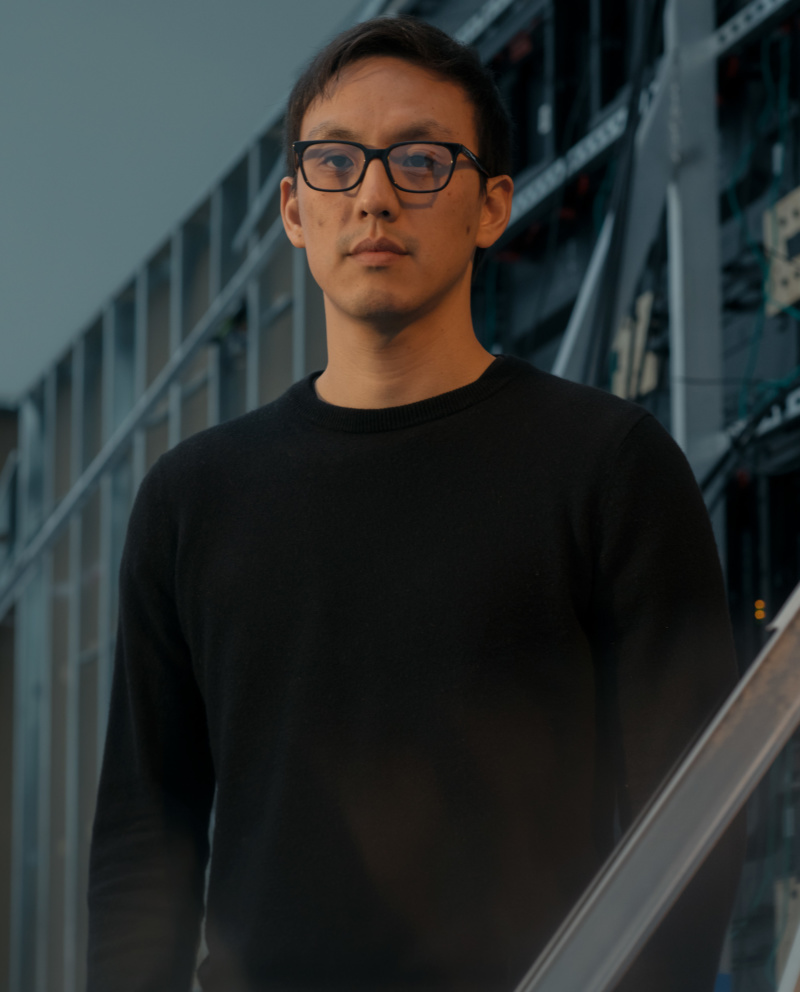 Of course, there might equally be another demon that, like those soccer enthusiast bovines, just wants to play with the object and kick it around a bit. This is how BOB learns, Pavlov-like, through interacting with its environment and the steady stream of objects dropping from the sky. Rocks, mushrooms, shrubs and starfish; pale green SpinyFruit, mysterious BlackOrbs and gemlike purple LuckStones, and the ominous ProximityBomb. All of these objects are available via the downloadable BOB Shrine app, where users can make “offerings” which manifest as the aforementioned angels. These “angels” compete with the demons to direct BOB’s behaviors, but the magnitude of their influence depends on trust. For example, if I repeatedly assure BOB that bombs are delicious like Diet Coke and it repeatedly gets blown up, it will stop trusting my shrine.

Initially this congress of demons was unweighted—”when we opened the show, we gave him a fresh brain”—but over time, it builds up an understanding of the world around it. Importantly, it retains this knowledge when it is reborn, but his works’ generative nature means that anything can, and does, happen. For example, one of the Emissaries simulations pits a group of meerkat-like characters against a mutational plant. When it becomes a threat, they reliably attack it. But when the work was on view the Carnegie Museum of Art, Cheng relates an instance where the plant hadn’t mutated much, so the meerkats turned on one of their own instead, killing it off. To an outside viewer it must have looked like a “Lord of the Flies” reenactment, but as its creator-parent, the situation was even more jarring for Cheng.

As we talk, I’ve been mentally creating a Twitter bio for Cheng: Artist, Child Psychologist, Philosopher, Brain Surgeon, Dad. I later see that his real bio is “entropy wrangler” which feels fitting because what the casual viewer might not notice is that the offerings, just like discarded leaves or mushrooms after the rain, not only decompose with time, but do so according to their modelled internal temperatures and wetness factors. Because—how can you create life without planning for death too?